Bernstein’s 1944 musical was such an exuberant work that still today it retains a kind of energy that every Broadway musical since has attempted to re-express. Unfortunately, there was no time like a shore leave in New York City in the middle of World War II, when three (well really two, since the third, Chip is a shy boy more determined to see the sights) randy sailors are dropped upon that great city for an entire day. The chaos they cause, the loves that trail them, and the complete joy that emanates from their chaotic adventures simply cannot be matched. 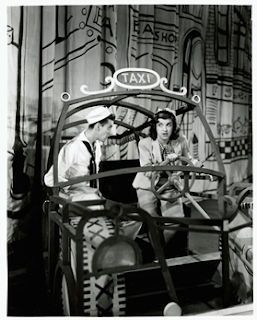 This musical came out of the dance world, with the miraculous Jerome Robbins focusing its energies on simple body movements and the grand wizard, Leonard Bernstein producing a musical score that took its popular lyrics into new jazz-inspired dimensions.

Sorry to say that most of the audience who loves this musical has probably only seen the film version, which, although well-meaning, completely eviscerated the work from most of its excellent songs (chipping away the absolutely hilarious “Carried Away,” the beautiful ballad “Lonely Town,” and others). Roger Edens introduced several other charming numbers and allowed Ann Miller to dance out her heart, but it just ain’t as great, sorry to say, as the original, which, obviously, given its premier three years before my birth, I never had the opportunity of seeing. But, of course, I have heard the original cast recording dozens of times, often renting it from local libraries, and later purchasing it for my private collection.

There are so many great songs in this musical that I am completely frustrated in being able to select only a couple for my inclusion in “My Favorite Musical Theater Songs.” I might, otherwise have chosen 4 or 5, even more.

But Nancy Walker’s incredible performance of “I Can Cook, Too,” despite it’s silly topicality has got to me one of the great songs ever performed. The war-time taxi drive, Hildy, is desperate for a lover, and the moment she spots Chip (Chris Alexander in the original) she is all agog, insisting that the shyest of the trio cancel his impossible tour of now disappeared sites, and “Come Up to My Place.” And when she gets him there, she convinces him that not only is she a great lover, but that, what every man of the day might have desired, she “Can Cook Too”—this all despite the fact that she knows it may be only for one night!


Oh, I can cook, too, on top of the rest,
My seafood's the best in the town.
And I can cook, too.
My fish can't be beat,
My sugar's the sweetest around.
I'm a man's ideal of a perfect meal
Right down to the demi-tasse.
I'm a pot of joy for a hungry boy,
Baby, I'm cookin' with gas.
Oh, I'm a gumdrop,
A sweet lollipop,
A brook trout right out of the brook,
And what's more, baby, I can cook!
Her wonderful song is a plea for love that goes beyond any possible relationship, a statement of her accomplishments that represents a pre-feminist declaration of her value and talents. Bernstein’s constantly driven energetic rhythms along with her nearly endless statements of her culinary abilities (these lyrics written by Bernstein himself instead of his wonderful collaborators, Adolph Comden and Betty Green) is the open cry of a women who not only knows how to survive, but is clearly aware of her mutable talents, along with knowing the kind of man who might be able to appreciate them.

Walker is the best one can imagine singing this song. Lesbian performer, Lea DeLaria, certainly gave it her all in later stage versions. She’s great, but quite over the top in insistence. Walker, although no beauty, makes you want to take in your arms and run away to a world that neither she nor Chip can ever inhabit. Ivy may be beautiful, and her one-day lover, Gabey, utterly enchanted and committed to her (they may even get together after the war, we believe); but clearly Hildy is worth any sailor boy’s love.

Posted by Douglas Messerli at 1:37 PM