Mary Rodgers and Marshall Barer, Once Upon a Mattress, 1959

Mary Rodgers and Marshall Barer, Once Upon a Mattress, 1959

https://www.youtube.com/watch?v=3iuRA3NAWcc
Mary Rodgers and Marshall Barer, Once Upon a Mattress, 1959
Performers: Jackie Hoffman, John Epperson, and many others in the Transport Groups concert
production, 2013

If one ever needed a definition of irony, I might invite young students to listen to Mary Rodgers and Marshall Barer’s rendition of the song “Shy” as sung by the original performer, Carol Burnett. 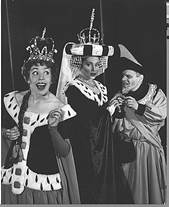 Burnett brilliantly belts out her “Shy” song, proclaiming her demure behavior underneath her absolutely hurricane-like surface, literally, through Joe Layton’s wonderful choreography, blowing the members of Queen Aggravain’s medieval court off their feet. The young Winnifred (who likes her nick-name of Fred), is, of course, anything but shy. She has just swam the moat to apply for the role of princess, and is determined to find a husband, since, as she finally admits she is “shy” of a man if not naturally shy in personality.


Not a single courtier will admit to being Prince Dauntless, and whenever the Prince dares to admit that he is the one, also desperate for a wife, his imperious mother pulls him away. Winnifred takes the entire court on a whirlwind dance in order to discover the Prince’s identity, all the time denying her totally domineering personality.


The song and the musical as a whole is so close to camp that it later was performed by a group of gay and drag performers, including John Epperson as the Queen and the wonderful David Greenspan as the King, with comedian Jackie Hoffman as Winnifred. I’ve included a selection of songs from that Transport Group’s 2013 production.


But then, nearly everybody, including Dody Goodman, Imogene Coca, Buster Keaton, Sarah Jessica Parker, and numerous other luminaries have appeared in productions of this likeable musical, which, when first appeared Off-Broadway, was given luke-warm reviews, but was loved by audiences, allowing to last a reasonable run of 244 performances before it was revived again and again in theater and in television productions. Tracey Ullman, performing it in 2005 on television, sang beautifully, but far more tamely than Burnett and others, almost convincing her audiences that she might really be a little shy and was just bluffing as the future Princess that couldn’t sleep.


I saw the 1964 television version with Burnett, Elliot Gould as the Jester, and others. Bernadette Peters later appeared in a 1972 TV production as Lady Larken, along with the original cast members, Burnett, Jack Gilford, and Jane White.


The talented composer, Mary Rodgers, daughter of one of the titans of composers Richard Rodgers, went on to have a hit in the Off-Broadway musical The Mad Show, based on skits from Mad Magazine, and wrote Phyllis Newman's one-woman show The Madwoman of Central Park West (1979), as well as contributing, along with Stephen Sondheim, to the short-lived Judy Holliday musical, Hot Spot.


Her son, Adam Guettel, wrote the successful score for the musical, The Light in the Piazza, and previously sang in numerous operas as a child performer before turning to compose many notable classical scores.


Mary went on to write numerous children’s books, playing down her musical gifts, proclaiming that she had neither the talents of her father or son. But, to be honest, her crazy fairy-tale musical was one of my favorites of my youth, and her song “Shy,” I always felt, was a secret satire on her own father’s similar statement in “I Whistle a Happy Tune” from The King and I.