https://www.youtube.com/watch?v=cNcHkQy-KQg
Harold Rome, I Can Get It for You Wholesale, 1962
Performer: Barbra Streisand, 1962
When I was a young admirer of Broadway musical theater, I also had a paper route, a requirement by my parents to help me pay for college. But after I’d pay the proper newspaper fees, I would somedays run off to the local record store to spend a couple of my earned dollars on a Broadway cast recording. It’s hard to make people understand my compulsion today, particularly given the fact that we did not own a proper record player on which to play the recordings I was regularly bringing home. I simply had to have them, those that I loved, and, along with the books of some of the those musicals, which my parents did allow to buy, I simply had to have them around me as if these books and recordings were some sort of totem to which I might quietly pray.


Fortunately, in my youth, record stores allowed potential buyers the possibility of hearing the records before purchasing them. I suppose they might have imagined the amount of damage these "listenings" might have caused to their records, but they didn’t at all flinch; besides I had bought many a recording from them. 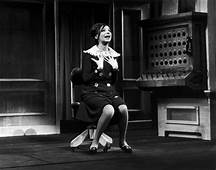 I still recall today, asking to hear the record from the 1962 musical, with music and lyrics by Harold Rome, I Can Get It for You Wholesale. I’d never read the original, based on a novel by Jerome Weidman, who also wrote the musical’s book, so I had utterly no idea about the story about an unscrupulous business man in the 1930s New York City garment district. I don’t even suppose I might have known what the “garment district” was, and I certainly didn’t know anything about its long history, nor about Rome’s involvement with the Ladies' Garment Workers' Union show Pins and Needles, long before my own infatuation with musical theater.


I didn’t think much about the musical as a whole; now when I hear such wonderful songs such as “What Are They Doing To Us Now?” with its Jewish-infused musical dance numbers and socialist rhetoric, or hear the hilariously witty “I’m not a Well Man,” I wish I’d scooped up the record and brought it home for adoration. But there was only one song in that musical which completely captivated me, sung by a completely unknown singer, Barbra Streisand: Miss Marmelstein. Unlike most of the songs I’ve selected, this ditty is not a great theater ballad, and, perhaps, not even the best song of the musical. But I was so taken with the singer that it never left my mind, and listening to it again the other day, I realized that I just had to include among my very favorite songs of Broadway musical theater.


The complaint of the secretary Miss Marmelstein is not about her work—she loves her menial job—but the fact that when everybody demands her help or even attempts to communicate with her, they use only her last name—which means, to her, that nobody is actually interested in her as a sexual being; even her first name might be “better,” It’s Yetta.” The former CUNY English major is simply frustrated that she can’t find a guy or even a friend: she’s only “Miss Marmelstein” to everyone around her, as others singers cry out around her vocal complaints. 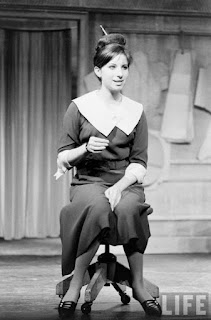 The marvelous song is all Streisand’s, she owns it, and it allowed her a bigger presence in the musical than even her later husband, Elliott Gould, and the numerous other talented cast members. It was Streisand who made the cover of Life magaine. Even then, the feisty young 19-year old complained, in a backstage interview, that the show had completely upended her life, taking away all of night life and forcing her to the theater at an early hour each day! The musical, which lasted 300 performances, was not one of David Merrick’s hits, but for Streisand…as we know, it was only the beginning.
Los Angeles, August 26, 2017
Posted by Douglas Messerli at 1:14 PM