“Never Will I Marry”

Given its very strange story, it is probably pretty apparent why Lesser Samuels and Frank Loesser’s 1960 musical lasted only 97 performances. Set in a mythical town, Greenwillow, the eldest born of each generation of the Briggs family are forced to leave their loved ones and wives to “wander,” leaving their family members to care for one another until their father one day comes home. In some senses, this is a unstated dream of both heterosexual and homosexual men who need more time to discover themselves, and casting Anthony Perkins in the lead role of Gideon Briggs, heightens the gay subtheme, even though, in this case Gideon did not want to follow the family custom since he was in love with a local girl, Dorrie,
In any event, Perkins sang the work’s most powerful song, “Never Will I Marry,” with such soulfulness that it might almost be thought of as a lost gay anthem before gay marriage was legal, even though we know in the musical itself he does in fact find a way to stay and marry.

The “narrow my bed” phrase is one of the most haunting moments of this lyric, which goes on to reiterate what might almost have been seen as a manifesto of gay life in the early 1960s, saying everything with it's low baritone iteration of the word "born," the high tenor expression of "marry," and Perkins' emphatic statement of a lonely death.

No burden to end
No conscience, no care
No memories to mourn
No turning, for I was
Born to wander solitary
Wide my world, narrow my bed
Never never never will I marry
Born to wander 'til I'm dead 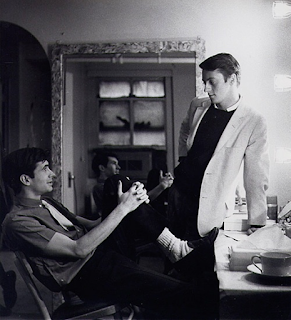 Anthony Perkins and choreographer Grover Dale during the production of Greenwillow
Clearly, young Gideon, if he were to carry on the family tradition, has utterly no intention of returning, or “No turning,” as he puts in the second stanza.
I have included two versions of this powerful song sung by Perkins, one from the original cast recording, with its brief and quite silly musical prelude, made in the same year that he was shooting Alfred Hitchcock’s Psycho, and a second “Great Performances” series from 2013, clearly taken from a Tony broadcast of years earlier (which I saw), since Perkins died in 1992 of AIDS, after having had affairs over the years with Tab Hunter, Rock Hudson, Rudolph Nureyev, Stephen Sondheim, the dancer-choreographer Grover Dale, and, I have evidence to believe, with my dear friend, Robert Orr—before marrying, at age 41, photographer Berinthia "Berry" Berenson, with whom he had two sons.
What is utterly fascinating to me is that this clear anthem of the gay life was also recorded by a substantial number of women, including a jazz version by Nancy Wilson performing with Cannoball Adderley, Barbra Streisand, and Judy Garland, all of which I have also included in my list of video performances.

Posted by Douglas Messerli at 8:48 AM