Noel Coward | "Why Do the Wrong People Travel?" (from Sail Away) My Favorite Musical Theater Songs

“Why Do the Wrong People Travel?”

Performer: Elaine Stritch from At Liberty

Today most people know this wonderful Noel Coward song from his musical Sail Away from Elaine Stritch’s wonderful cabaret review At Liberty, where she still sings it most forcibly, but without the slightly more dulcet tones of her original recording. 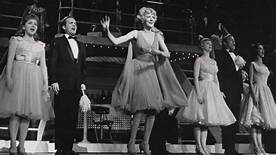 This being a Coward song, it’s filled with sarcastic jibes at both those “wrong” people who endlessly travel, and the “right” people in Omaha who stay at home. Indeed there is a sort of dismissive attitude of all Americans with their rare steaks smothered in catchup; the right people staying people back home “eat hot donuts.”


But Stritch does the song so well, that we truly do feel all the tourist  processions of Houston Texans with all the cameras around their necks seeing Pompeii on the “only day when its up to”—“with molten lava,” while the right people “sit back home with all their Kleenex,” is a kind of important distinction. Stritch, after all, plays a tourist guide, set upon by all those impossible tourists, particularly the totally obnoxious Sweeneys.


Her best song appears very late in the show, but it’s a remarkable show-stopper, worth being included in “My Favorite Musical Theater Songs.”


Stritch began the show in a basically minor role as Mimi Paragon, but proved so popular that Coward and choreographer Joe Layton quickly got rid of their lead, Jean Feen, and gave Stritch the major role. As Stritch admits something to the effect, “That’s the way it is!” And Coward always argued that his choice had been the right one, even though the musical lasted only 167 performances at the Broadhurst Theatre in New York. It did slightly better in London, lasting 252 performances. But the song still exists today basically because of Stritch’s wonderful hollering out of its lines in her At Liberty performances.