“June Is Bustin’ Out All Over”

Oscar Hammerstein and Richard Rodgers’ 1945 musical Carousel, based on Hungarian writer  Ferenc Molnár's Liliom, is one of their very darkest works—although as I have written elsewhere, there are dark currents stirring in many of their musical operas. Carousel’s hero, Billy Bigelow, although an appealing and handsome carousel barker at the beginning of the work, is ultimately a weak man who allows a friend to involve him in a robbery which ends in Billy’s death. His poor widow, the former millworker Julie Jordon, is left to raise their daughter alone, to the taunts of her former fellow worker Carrie Pipperidge, who has married the far more successful Enoch Snow. 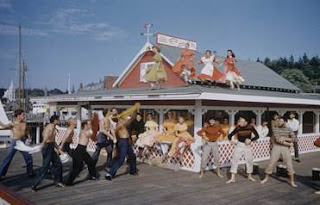 Accordingly, even the lovely ballads, such as “If I Loved You” at the very beginning of the musical, are still filled with longing and wishful thinking, most potently expressed in Billy’s long “Soliloquy” at the end of Act I as he imagines the possibilities of the new son or daughter that his wife is expecting. That song alone is enough to break any viewer’s heart, and it is the recognition that he will have to provide financial support for a daughter that leads to his downfall.


Yet, in the middle of that Act there is one absolutely joyous moment when everyone in the community, so it seems, is simply enjoying, after the hard Maine winter, the warmth and beauty of the month of June.


After a wonderful introductory recounting of the months just prior, the entire male ensemble prepare everyone for the new miracle of June, almost trumpeting the new possibilities it represents:


[Nettie Fowler]
March went out like a lion
A whippin' up the water in the bay
Then April cried and stepped aside
And along come pretty little May!
May was full of promises
But she didn't keep 'em quickly enough for some
And a crowd of doubtin' Thomases
Was predictin' that the summer'd never come

[Male Ensemble]
But it's comin, by gum
We can feel it come
You can feel it in your heart
You can see it in the ground

June is bustin' out all over
The feelin' is gettin' so intense
That the young Virginia creepers
Have been huggin' the bejeepers
Outta all the mornin' glories on the fence!
Because it's June!

Dance is a large part of this ritual, and by the time the piece closes, the audience itself might wish to rush on stage to join in on the great Agnes de Mille’s lovely chorography. In the midst of so much darkness, the simple joy of this song demonstrates the true pleasures of the Maine fishing community which suffers so much to arrive at this moment each year.


Hammerstein’s lyrics here represent some of the best in a long career of making nature part of the human landscape. The very idea of Virginia Creepers “huggin’ the bejeepers” out of the Morning Glories is nothing less than brilliant. Along with Oklahoma!’s corn grown high as an “elephant’s eye,” the lyricist forces us to see the natural world in the way that its simple characters do, as an anthropomorphic being in total animation.