Perhaps the first song sung into a Dictaphone and played back so that the character, in this case Sid Sorokin (John Raitt), ultimately sings a duet with himself, is one of the great love ballads of musical theater. 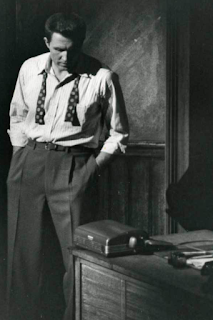 Sorokin, the new superintendent of a pajama-making factory in Dubuque, Iowa, has suddenly fallen in love with one of his employees, Babe Williams (Janis Page), who is also the head of the union “grievance” committee, and is a union girl all the way, even warning her new employer about her commitments. Somewhat into Act 1, Sorokin, taken by his possible opponent, realizing his love for her, attempts to evaluate his situation, realizing that he, to use the cliché, is head-over-heels in love with a woman who can only utterly dismiss his intentions given his administrative position. He spends much of the rest of the musical trying to convince her otherwise, trying to reveal his good intentions, despite the fact that his superior, “Old Man” Hasler, refuses to give his employees the raise of 7 1/2 cents which they demand. In fact, Hasler, has already dealt with just such raise “of the books,” which, when Sorokin discovers it, results in a amenable situation for all.


Based on a novel by Richard Bissell, a Iowa compatriot of Meredith Willson, the original musical was a huge Broadway hit, running 1,063 performances, was soon after filmed (again with Raitt, this time performing with Doris Day), and has been revived several times since, most successfully in 2006, with Harry Connick, Jr., a production which ran for 129 performances.


If the musical is most remembered for its union sentiments and the wonderfully comic performance of the overly jealous Eddie Foy, Jr. and his girlfriend, Carol Haney (both of whom reprised their performances in the film version). 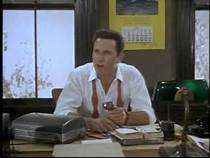 Sorokin’s song is sung to no one else but himself, a kind memo to his own sanity, trying to make clear to his inner consciousness that it is ridiculous to fall in love with Babe, given her near complete dismissal of him. But as he says, even to himself, he’s just not “thinking to clear” and “it’s all going in one ear and out the other.”

Hey there, you with the stars in your eyes
Love never made a fool of you
You used to be too wise

Hey there, you on that high flying cloud
Though she won't throw a crumb to you
You think some day she'll come to you

His advice to himself, presented in the form of a Dictaphone memo, is of course simply an echo of his own heart, and he is quite obvious not thinking “too clearly”—thank heaven for the plot! But the very idea of a businessman communicating with himself through the most current technology of the day would not be repeated until Frank Loessser’s How to Succeed in Business without Really Trying years later. In some senses, it’s a sort of “gimmick” song, but the beauty of Raitt’s voice shifts it into an entirely different perspective, allowing it to become a kind of strange long song to oneself (again reminding us of Loesser’s musical in which the hero sings of self-love in “I Believe in You”).

Posted by Douglas Messerli at 4:02 PM