It’s more than haunting that at the very moment I was listening to the tapes above of Barbara Cook’s brilliant performance from the 1963 musical, one of my very favorites, of She Loves Me—for me almost a childhood icon, when at 16 I listened to the original Broadway cast recording that I had bought nearly every day (I wore the record out and, a few years later, bought a second copy)—Cook was already dead. I heard of her death only later in the day. And, yes, I admit, I cried  a good deal. 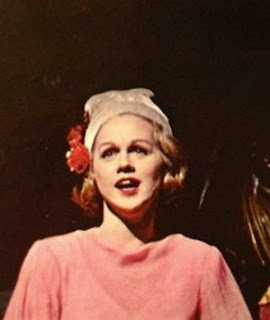 Cook, after all, had been a significant figure, as I write elsewhere, for so many years in my life, from 1957 on, through her performances of my home-state’s The Music Man and Bernstein’s brilliant Candide through She Loves Me and into a new life (and a new body) in which Howard and I enjoyed her in, first gay bar cabarets, and later beloved video productions of Follies and more immediate theatrical productions in Los Angeles in Westwood and Beverly Hills. Who couldn’t love that now overweight singer who performed nearly operatic feats while telling such wonderful tales of her own life? Cook was legend, a Broadway legend and cabaret-singer legend. She had it all—and she knew it. She had done everything, and done it so brilliantly that no one could do anything but love and admire her if you loved the genres in which she had appeared.
She sang so many songs so brilliantly that it seems almost a sin to describe the pleading Sheldon Harnick and Jerry Bock ditty “She Loves Me” as the first of many works I will later describe coming from those incredible lungs. But her performance is so amazing that it is impossible to ignore it.
I recently listened to the same song, performed in a revival by the quite talented Laura Benanti, who I had first seen and was very impressed by in a revival of Gypsy and later enjoyed enormously in the very underrated Broadway musical, based on Pedro Almodóvar’s Women on the Verge of a Nervous Breakdown. But the differences between their performances are notable. Benanti sings the Harnick-Bock song very nicely and credibly, but far too filled with surety.
From the very first chord, Cook, who had a voice that might have brought down the angels to the dust of the earth, sings with such a tremulous sense of fear and insecurity that you couldn’t even imagine that this then, thin, almost emaciated singer, could have easily belted out her song to the very back levels of the balcony.

Will he like the girl he sees?
If he doesn't, will he know enough to know
That there's more to me than I may always show?
Will he like me?

She pleads, terrified by the meeting with her letter-correspondent, who just a few songs before has excitedly sung of their meeting at eight.


She pleads with the audience that she is a woman who might not be able to express her depths:

Will he know that there's a world of love
Waiting to warm him?
How I'm hoping that his eyes and ears
Won't misinform him

She is terrified of his judgment, so much so that she is ready to cancel her appointment. It is almost painful for the audience to hear and see that this beautiful woman, with whom Georg Nowack, the shy assistant manager of Maraczek's Parfumerie, has been corresponding, is also frightened about their evening appointment.
Yet Cook, in her singing, takes this song to new limits, the plea becoming a kind a pleading  song not with her not-yet-perceived lover, but for an complete engagement with the audience, wherein her soaring lyrical arpeggios totally convince us that she is more than worthy of the unknowing Georg’s love. Benanti sings the final pleading notes of this desperate song of acceptance with a full throated demand:

Cook, instead, pauses, aspirates the final words, “He’s just…..got to” to create a suspense upon which depends the entire rest of the tale. Yes, he does “got to,” since she’s so impossibly loveable given her singing, but her own fears are voiced so beautifully that we, too, wonder, will Georg really see her inner beauty, really hear her lovely voice? It’s a dilemma, given her own hostility to the real workaday situation, that is expressed totally in the voice. And Cook is able, time and again, throughout this musical to convince of her inner beauty through her voice. Music, in this lovely tale of a Hungary of another time and place, is crucial. If you can’t hear Cook’s vocal message, you may not possibly comprehend the lovers’ attraction to each other. There is no question, given Cook’s singing that “He’s just got to.”