Stephen Sondheim, Merrily We Roll Along, 1981

Certainly it’s unarguable that the very best song in Stephen Sondheim’s musical of 1981, Merrily We Roll Along, one of his few Broadway failures, was “As the Days Go By.” I’ve now seen two revivals of this work, and I think it was a great pity that the musical lasted, in its first presentation, for only 16 performances (with 52 previews).


I’d like to lay the blame on the wonderful director Harold Prince, but it was probably a product of both of the men’s hubris, who this time determined to do everything against logic: to choose only young, somewhat experienced actors (although many later became more famous; Jason Alexander was among the originals) and, worst of all, to dress up their characters—within a rather complex tale which, based on the 1934 play by George S. Kaufman and Moss Hart that took its plot from the current moment to move back in time—in T-shirts and pants with their character names emblazoned across the front. Names do not characters make, especially when you’re going backwards. Audiences just couldn’t assimilate it, and even today, in the well-meant revivals I’ve seen, it’s sometimes hard to comprehend these figures as they grow younger and younger, going back through space. Since all of the original actors were already younger in the Broadway original, the whole decision seems counterintuitive and quite confusing. 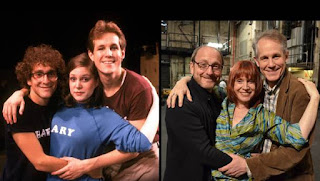 What’s more this is truly one of Sondheim’s most cynical works. Beginning with the breakdown of dozens of decades-long relationships, going on to examine the past to show us why it all took place. It’s a terribly sad work about wrong choices, missed opportunities, greed, selfishness, and the general confusion of those seeking money over their actual gifts, talents, and abilities to love. The show’s beautiful end song, “Our Time,” becomes a paean to lost lives instead of a statement of the brave new world in which the characters saw before themselves.


The man at the center of this musical tragedy, Franklin Shepard, sang this sad song of frustrated love in the original production upon losing his wife, Beth. In the second act, it is reprised by Franklin as a duet with his close novelist friend, Mary Flynn, revealing her long secret love of him.


In the Off-Broadway revival of 1994—which has now become the standard version of the work—his then-future wife, Beth sings it in the first act, to be reprised in the second act as a trio between Beth, Franklin, and Mary, where it becomes almost a banner song to express the failures of all their loves to be able to sustain their loves. Just thinking of its simple lyrics immediately brings tears to my eyes.


Nearly everyone with a marvelous voice has sung this song, but I’d recommend Barbara Cook and Bernadette Peters as the more remarkable of its interpreters. I’ve also included the original casts, along with other delights. The whole story of the musical and its failure has been quite nicely recounted in the 2016 indie film, The Best Worst Thing That Ever Could Have Happened.

Posted by Douglas Messerli at 9:43 AM