Perhaps I should begin by admitting that it is difficult even to talk about the plot, written originally by Guy Bolton and P. J. Wodehouse, and revised extensively by the later writing team of Howard Lindsay and Russel Crouse (at the time the director and an agent), of Cole Porter’s Anything Goes. Since the 1934 production, the musical has been reworked numerous times, with major cuts of songs, additional Porter songs added, and the story tweaked so extensively that its original writers might not even recognize it. I saw the 2011 revival, performed in Los Angeles at the Ahmanson Theater, which had added numerous songs such as “Friendship,” “It’s De-Lovely,” “You’d Be So Easy to Love” (cut from the original) and “The Crew Song” mostly from other Porter musicals 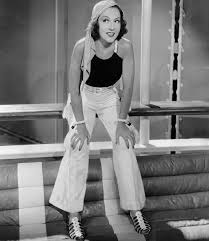 But the comments below and in my discussion of other songs from Anything Goes are all based on the 1934 original performed at New York’s Alvin Theatre where it ran for 420 performances.


In a sense, the daffy plot—involving two sets of lovers, mediocre gang members (“Moonface” Martin is only Public Enemy 13) dressed up as clergy members, wealthy parents and a full crew aboard a European-bound voyage of the SS American—hardly matters. It’s the songs in this fairly licentious and libertine work that is the central thing. And what wonderful songs Porter provided, several of which are among my favorites: “I Get a Kick Out of You,”  “You’re the Top,” and the memorable “Anything Goes.”


In the original version, the song was sung by Reno, a former evangelist turned nightclub singer, played by the great Ethel Merman. She has just discovered that she is in love with the wealthy Britisher Evelyn Oakleigh, who is engaged to Hope Harcourt, daughter of a wealthy American family, the Hartcourts, who pretend their healthy business is in financial danger in order to arrange the marriage between the two families. Meanwhile Billy, a young wallstreet broker, who has previously met Hope in a taxi, and is desperately interested the stranger, determines to stow away on the boat with the hopes of courting Hope.


Sensing wealth and security in Oakleigh, Reno throws over convention in her determination to marry the stuffy and quite incomprehensible Brit, praising the current American attitudes that permit her to make such an audacious choice.


Porter was never funnier than in this musical, and his high-spirited salute to the looseness of current mores quite literally leaps off the stage as dancing sailors and sailorettes tap away the song’s contagious repetitions. Porter’s original is necessary if one wants to hear nearly all the lyrics (although others were later added). But it is Merman’s shortened and clearly-iterated version that is the most unforgettable, although Patti Lupone sings it with more subtle shadings; Merman was never truly subtle! The lyrics below give just some of this true poem dedicated to naughty America’s delights.

[RENO]
Times have changed,
And we've often rewound the clock,
Since the Puritans got a shock,
When they landed on Plymouth Rock.
If today,
Any shock they should try to stem,
'Stead of landing on Plymouth Rock,
Plymouth Rock would land on them.

In olden days a glimpse of stocking
Was looked on as something shocking,
But now, God knows,
Anything Goes.

Good authors too who once knew better words,
Now only use four letter words
Writing prose, anything goes.

The world has gone mad today
And good's bad today,
And black's white today,
And day's night today,
When most guys today
That women prize today
Are just silly gigolos

And though I'm not a great romancer
I know that you're bound to answer
When I propose,
Anything goes

For my essay on the 2012 revival at the Ahmanson Theatre in Los Angeles, go here:

Posted by Douglas Messerli at 8:50 AM