Douglas Messerli | "The Quarantined Couple" (on Strindberg's The Dance of Death)

THE QUARANTINED COUPLE
by Douglas Messerli


August Strindberg (adapted in English by Conor McPherson), The Dance of Death / the performance I saw, directed by Ron Sossi, was at the Odyssey Theater Ensemble on Sunday, September 24, 2017 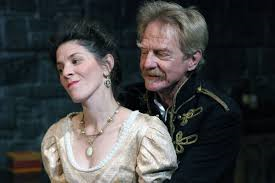 Conor McPherson’s adaptation of August Strindberg’s The Dance of Death which I saw at Los Angeles’ Odyssey Theater Ensemble yesterday, represents a slightly revised version of Part I of the original play, deleting several minor figures, and closing in the terrifying triumvirate of monsters who attempt to destroy one another.
Nearing their 25 wedding anniversary, former artillery captain, perpetually dressed up in military costume, Edgar (Darrell Larson) is a penurious and, in this part of the play, acutely poor man who, surely as Strindberg himself did to his several wives, berates and dismisses the much younger Alice (Lizzy Kimball), who was previously a mediocre actress.
Living on an isolated island in a horrific-looking stone edifice—formerly the island’s jail—they have very few friends, both dismissing the local bourgeoisie as “small-minded nincompoops,”—and, in their hatred for one another have also turned their children, living on the mainland nearby, against them.  Indeed, as the play begins they lose yet another cook, and throughout the play cannot seem to be able to serve up even a cold meal. They are true vampires or, as we later perceive, even cannibals. Perhaps they don’t need real food. Besides, the Captain refuses to pay his bills.
The sudden arrival on the island of Alice’s cousin, Kurt, who since his divorce from his wife and the loss of his children’s custody—a painful issue for him, which he later discovers was partially the doing of Edgar—and who since has been traveling to the US and elsewhere, creates a new dimension of friction between the already deep hatreds for each other which they have been acting out.
Kurt has now been hired to create a quarantine center on the island, suggesting that a world which is already separated from the rest of civilization, might become even a center of those people who, as Strindberg puts it, live in a hell created by others and themselves. Like Jean-Paul Sartre’s No Exit, Strindberg’s is a world of the characters’ own-making and from which the sufferers cannot escape. This modern couple lives without a telephone and rely only on an antique Morse tape recorder, a bit today like living without a computer and cell-phone. (Admittedly, Howard and I do not own the latter).
Much like George and Martha in Albee’s Strindberg-influenced Who’s Afraid of Virginia Woolf? Edgar and Alice play a game similar to “Get the Guests” with Kurt, airing their open hatred of one another, while simultaneously attempting to win him over to their own side. As in the Albee play, the woman first succeeds in wooing the guest, the still-attractive Alice not only drawing Kurt temporarily to her bed, where he bites her lip like a vampire and suggestively hints that he would like to bound and rape her.
When Edgar ups the ante by declaring that he has found Kurt’s son and brought him as a young soldier to island, Alice strikes back by turning her husband in for an insurance-fraud scheme.
If Strindberg’s black work is brutal it is, just like Albee’s play a work that alternates between terror and comedy, as each of the marital partners perpetually find ways to torture one another. Their (and Strindberg’s) constant creativeness in their methods present us with what might be described as a comedy of marital horrors. The battlers, in this case, like elks with antlers locked, cannot release themselves from the struggle, and will clearly die in one anothers’ metaphorical horns.
These two, however, are seasoned travelers to the hell which they have created for one another, while Kurt, a basically gentle being who finds himself suddenly caught up in this maelstrom, is completely humiliated and even shocked by his and their behaviors. And when, finally, Edgar reveals that his stories have all been lies, Kurt changes sides, and quickly abandons the woman who he now realizes is just as diabolical as her husband, quickly fleeing the familial circus for the bourgeoisie households which Edgar and Alice have dismissed.
The play ends, as in Albee’s work, with a quiet détente, which we know will quickly be broken as the next day begins. But in that minute of peacefulness we also come to comprehend that those two self-haters are also, still, very much in love, both declaring, for just one moment, their own fears and sorrows for the lives they have created.
These three characters demand such a high degree of subtle vulgarity that they are nearly impossible to perform except by the very greatest of actors. I’d like to have seen a production with Katherine Hepburn and Laurence Olivier (who did play the Edgar role in 1967) , for example, or Vanessa Redgrave and some male of her league. Kimball, Larson and Jeff LeBeau, however, make a credible attempt to convey the dark comedic world that Strindberg created, and at moments Kimball’s tortured beauty and Larson’s dapper, if crazed, dances lift us to something close to the play’s demands.
The Odyssey Theater Ensemble has done so many wonderful plays over the 48 years of their existence, that it is notable that the company would produce this important play in Los Angeles. Strindberg, despite his true madness, spun like a creative hurricane through the early 20th century which such a force that, in one way or another, he has influenced nearly all of us. Even my own play, written under my pseudonym, Kier Peters, Past Present Future Tense, is a child, through Albee, of Strindberg’s Dödsdansen.
Once more, the Odyssey should be recognized for their far-sightedness in reviving this work.