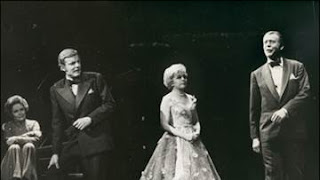 Perhaps one the most memorable of all songs in the American musical theater is a rather short anthem to the love of Sally by her husband Buddy. In fact, Sally, as we soon discover, is totally unhappy in her relationship, as is the much unappreciated Buddy, who is having affairs simply because the wife to whom is so devoted is up every night dreaming and “going out of her mind” for his former friend, Ben, who, unlike Buddy, has become very successful in his careers.


Meeting up with all of her old Weismann Theatre performers in a gathering that reveals a long record of the theater performer’s travails and tales of survival, it becomes quite clear that hardly any of them is completely satisfied, that their time since their original performances as “Weismann girls,” many of them have gone on to live in worlds that are not what they might have imagined, some of them going on to perform, but most of them now forgotten.


It is one of the saddest and most cynical of all of Stephen Sondheim’s numerous dark statements about love and happiness.


Yet Sally, originally performed by Dorothy Collins attempts to delude herself early in the musical and even later, that she is still very much in love with her husband, Buddy, despite her almost mad desire for her former friend Ben.


It’s a fairly short song, but in “Buddy’s Eyes” she quickly sketches a situation in which she is still a prized love that “will never grow older,” and a situation in which the couple is eternally in love, another one of Sally’s numerous fantasies. Sally is all about desire, as we later discover, and this is just another example of her intense insistence to be loved. It’s a wonderful imaginative dream on her part, but the song is so absolutely incredibly beautiful that we (and her old friends) cannot help but believe it’s true. Perhaps even Buddy is convinced of its reality, although his "The God-Why-Don't-You-Love-Me Blues,” performed so brilliantly later by Mandy Patinkin, makes it clear it’s been an almost impossible love affair.


Dorothy Collins sings this song quite wonderfully, as do numerous great Broadway singers, including Bernadette Peters, Marin Mazie, Patti LuPone, and even a gay version sung by Scott Morris. I like them all. But there is simply no match to the remarkable Barbara Cook rendition in the 1985 Lincoln Center concert revival. Both of Sally’s songs, which are equally memorable, are sung by her with such an amazing interpretation that I cannot possibly imagine better performances. Cook takes down any other performers with her breathless suffering. She makes you truly believe that Buddy loves her even before she reveals that she loves, desperately and quite insanely, his friend Ben.


Yes, she is “going out of her mind,” and the fact that she can reveal that so intensely is something that American musical theater will never encounter again. If Sondheim had written only these two songs, “In Buddy's Eyes” and “Losing My Mind,” he would have been declared a great composer—but then we all know so my dozens of other great numbers that greatness is not even a concern. He’s truly a genius and a major force in Broadway and other musical theater.