With its often minor-keyed orchestration, its crashing trumpets and tympani, and the soaring tenor melody, Stephen Sondheim’s song, “Johanna,” from the darkest of his many dark musicals, might be among the most beautiful songs ever created for the musical stage.


I saw the original production with my companion Howard in 1979; we were on an overnight trip to New York, and I simply walked over to the Uris Theater and brought tickets for that evening to the show, an event that will probably still be rolling around in my mind even if I sink into Alzheimers. Len Cariou and Angela Lansbury are not a pair you easily forget. But then, too, Victor Garber’s solidly lyrical voice (we will soon be seeing the Canadian singer again in Hello, Dolly! playing with Bernadette Peters as a substitute to Bette Midler) is nothing something that cannot be ignored. His dulcet tones as the young sailor Anthony Hope represent everything in Sondheim’s sad musical that Sweeney Todd and Mrs. Lovett are not: love, faith, youth, and dreams. In his version of this Maria-like repetition of her name, his sole goal is to “steal her away” and bury himself in her yellow hair. 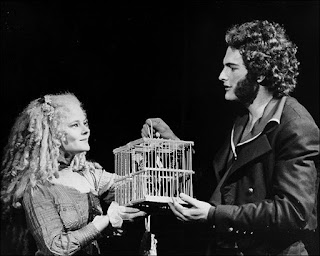 It’s simply a beautiful melody. But then Sondheim transforms it in its reprise into something that is even more amazing: a mini-opera sung as a quartet between Anthony, Sweeney, an old beggar woman right of our Weill’s Mahagonny (actually Sweeney’s now-mad wife) and Johanna herself, trapped in an insane asylum. The dramatic import of this operatic grouping is so amazing that it is transformed into a metaphor that speaks for the entire work, combining the hatred and obsessions of Sweeney, the desperate pleas of the heroine (Sarah Rice), the total madness of that heroine’s mother, and the pleading youthful hopes for love from Anthony. Musical theater simply doesn’t get better than this, and it’s a song filled with such a deep sense of possibility and utter failure that it quite literally saves Sondheim’s work from its basic morbidity, just as his “Not a Day Goes By” attempts to stave off the cynical tones of Merrily We Roll Along.


Who wouldn’t want to record this song, and almost all males with a good voice and the musical range it demands had done fine recordings, including Josh Groban, Max Cherin, and Nathan Gunn. In the 1982 revival, Cris Groenendaal rather over-dramatizes it and sings it a bit to emphatically. But the film version, sung by Jamie Campbell Bower has a much lighter and charming touch, that when joined later by Johnny Depp and other film singers makes, once more, for a remarkable dramatic statement—even if the blood punctuations of Sweeney’s throat cutting assaults seem a bit too much. Depp is no Len Cariou, who could make a death ballad sound beautiful (I’d love to hear him sing “Poor Judd Is Dead”), but he is no musical slouch, performing the song with great musical panache.

ANTHONY
I feel you Johanna
I feel you
Do they think that walls can hide you?
Even now I'm at you window
I am in the dark beside you
Buried sweetly in your yellow hair
Johanna

TODD
And are you beautiful and pale,
With yellow hair,
Like her?
I'd want you beautiful and pale
The way I've dreamed you were
Johanna
Bernadette Peters is one of the few women who have sung this song straight on, and so beautifully that you might think the “angels” who no longer prevail in Sweeney’s world are still there in her voice.


After now listening to more than 10 versions of Sondheim’s melody, I may suffer many an upcoming night humming to myself in my sleep.