the escaped unicorn
by Douglas Messerli

At 61 years of age, performance artist Karen Finley has moved away from her earlier provocative sexual performances to present, in The Expanded Unicorn Gratitude Mystery, a series of often sharply satirical monologues centered around the mythologies of national figures, mostly women or wanna-be-women.
The beautiful small beast (at least in medieval tapestries) with a phallic-like protrusion sprouting from its head, is represented, although rather sketchily, as a kind of graceful, if a bit frightening, male/female animal, often locked away in fenced-off areas from which, as the beginning film narrative suggests, it could nonetheless have easily escaped. 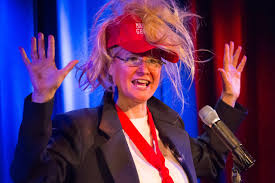 It is clearly this male-female dichotomy which Finley is exploring in this series of what, at times, appear as almost stand-up riffs, often put into a kind of witty hip-hop and even rap context. After all, Finley began in San Francisco working in monologues with a disco beat, so the fact that she continues in musical rhythmic terms should not be surprising.

Some of these riffs work better than others. The early, supposedly stylishly dressed woman of “gratitude,” reminding us of Jackie Kennedy, is smarmy enough that you quickly wish her into the “corn field” from where she seems to have come, as she spouts, over and over again, “I thank you, I want to thank you, I am so pleased and filled with gratitude, etc. etc”—resulting in a never-ending series of platitudes the likes of which one sees only in the Academy Awards ceremonies (Sally Fields also comes to mind). Surely she is totally appreciative of the unicorn’s charming abilities, without questioning its possibility to escape and “thrust.”
Perhaps a bit less successful was Finley’s testimony to the little blue dress, worn by Monica Lewinsky, stained into eternity by Bill Clinton’s semen. The trouble is that, despite, the clever props of an entire clothesline of blue dresses, a blue-filigree roof floated over most of the audience, and which took audience participation to create, and even the endless extrusion of sperm across the performer’s blue garment, Lewinsky is just not that interesting as a character of satiric intent. The dress became a replacement for the woman at its heart.
Finley’s monologue about Hillary Clinton is far sharper and, when it succeeds, is closer to the bone. Her Clinton realizes she is a figure beloved to be hated, and nervously adjusts her dialogues to deal with the two-edged sword with which she will constantly be met. If there was any true personification of the unicorn, a woman in a pair of male pants, it is her vision of Clinton, a woman trying to ameliorate the duo position of a strong woman in our society. And her often self-destructive attempts to position herself in our sexist world are both loveable and despicable at the very same moment. One cringes while trying to hold back the tears.
Certainly the most popular of Finley’s caricatures in this work was her performance of the hermaphroditic Trump, who loves cunts so much that he wants to himself become a “pussy.” Playing on the dozens of cartoons portraying the President in drag with figures such a Putin, along with Trump’s odd coiffeur, his endless applications of orange makeup, and his always oval-shaped lips, the performer makes it clear that Trump is perhaps the most like the mythological unicorn, a fleecy little girl with a big boy cock sprouting from his forehead. Here Finley often is at her very best; but the determination by some of the audience members to cheer on her every line with dramatic he-haws and hoots only showed-up those instances when the satire had completely gone over the top, falling into the category of simple mockery.
I can forgive the mockery, particularly by an artist who has herself been mocked by her own governmental officials as she was in 1990 when the then-head of the National Endowment for the Arts, John Frohnmayer vetoed her and 3 other performance artist’s grants for indecent behavior; but it’s hard to forgive what appears to be her claque. Finley herself seemed to diffuse the situation a bit by observing the somewhat scattered Redcat theater attendance the way only Trump might: “This is the biggest audience ever!”
Perhaps Finley’s most complex and profound monologue was the last, about a woman who so loved war that she could only have sexual relationships with soldiers, particularly those who had lost their limbs. In Finley’s round-about-telling, it becomes apparent that the woman comes to see her power by being fucked with the missing “stumps” of the generations of sons and sons and sons who are bred simply to go to war. As a female, she is the true progenitor of an army of American boys raised up only to lose their limbs and minds in the destruction of others. Dressed in a kind of American flag, Finley almost exhausts herself through this role until she bows, at end, for applause.
There is no question that Finley is a gifted political satirist and an important artist with a long career. Yet, in the end, as my theater-going companion Deborah Meadows suggested, I wished she might have gone a bit darker, exploring some of the real metaphors her mythological figure truly represents. There is a lighter, more entertaining shrillness to Finley’s direct assault of the events she recounts; but given her talents, one might seek, one imagines, a more nuanced and questioning approach. But Karen Finley has always throughout her career, put everything on the line, broken the rules, and shouted her anger out. And we should applaud her for that.

Posted by Douglas Messerli at 6:36 AM