Leroy Anderson, Jean and Walter Kerr, and Joan Ford | "Who's Been Sitting in My Chair?" from My Favorite Musical Theater Songs by Douglas Meserli

Who’s Been Sitting in My Chair?
https://www.youtube.com/watch?v=JqnincwVDAA

Shockingly, the musical composed by Leroy Anderson, with a libretto by the famous critic/writing-couple of Jean and Walter Kerr, starring the popular Elaine Stritch, co-staring the equally matinee idol Don Ameche, and with choreography by Agnes de Mille, was a total flop on Broadway, lasting just 161 performances. Perhaps the silly plot of a retiring movie star, attempting to marry into high society while completing just one last “bad” Hollywood film, Frontier Woman, was just too much for the New York theater audiences of the day. Too much slapstick, particularly when incorporating the original Goldilocks story, was just too difficult to deal with for the New York matinee audiences of the late 1950s. 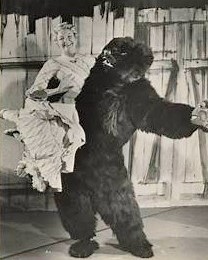 Give it to Stritch for her cheeky performance as Maggie Harris, who sings numerous of the musical's still loveable ditties with great panache. Her wonderful “Who’s Been Sitting in My Chair,” in which she desperately wishes for a visitation from anyone—including even of the bears—to come spill her porridge or just simply muss up her bed—is a lovely song of loneliness that resonates with her later Stephen Sondheim performance of the Follies’ “Broadway Baby”: “In my tiny flat, there’s just my cat, a bed and a chair.”

It’s a totally memorable song, despite the now forgotten status of the original musical. Joan Ford, who wrote the lyrics ought to become one of the Broadway legends.