THE ARCHITECTONICS OF LOVE
by Douglas Messerli 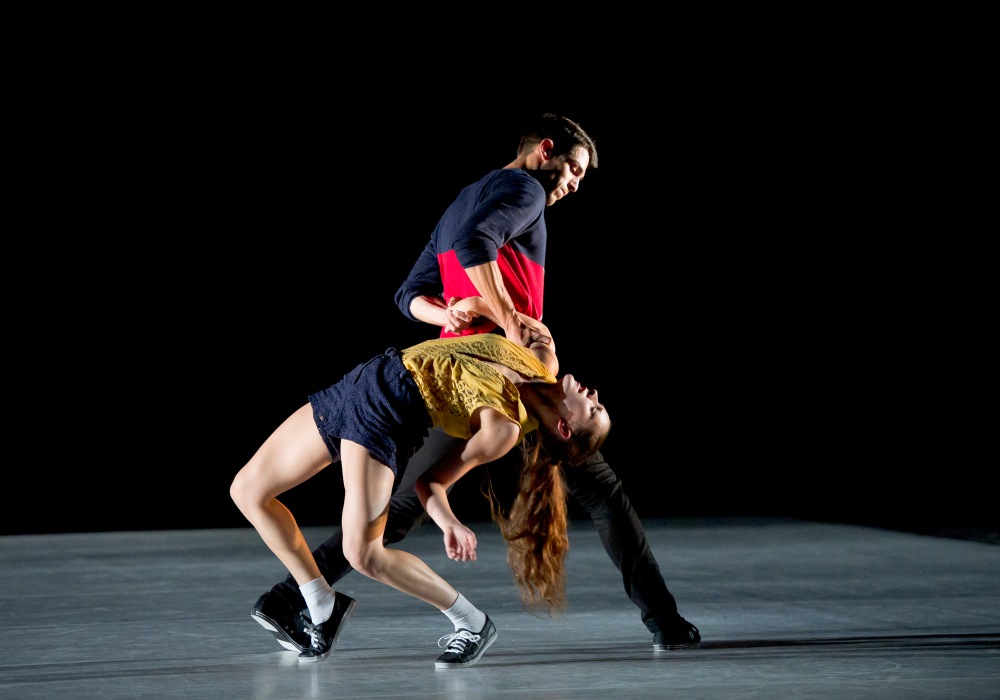 Beverly Hill’s Wallis Annenberg Center for the Performing Arts has accomplished a stunning coup in teaming up with noted dancer and choreographer Benjamin Millepied’s exciting L.A. Dance Project, presenting not only two sets of performances during the 2017-2018 season, but working with the company through the institution’s art education program.
Last night, I attended the first set of these quite remarkable dance performances, which featured Millepied’s 2006 pas de deux, Closer, with music, Mad Rush for piano by Philip Glass; the Noé Soulier-choreographed Second Quartet, with music by Tom De Cock; the multipart Millepied work from 2017, In Silence We Speak, incorporating two David Lang songs, you will love me and you will return; and ending with the stunning 2017 ensemble piece with film, Orpheus Highway, accompanied by a beautiful score by Steve Reich, Triple Quartet. This was a varied and exhausting display of Millepied’s demand for athleticism and precision from his dancers, performed with such gifted skill that all pieces absolutely delighted the sold-out theater audience.
Closer, long a favorite piece in Millepied’s growing canon, featured David Adrian Freeland Jr. and Janie Taylor in a piece, basically without narrative meaning, but nonetheless suggestive of a growing relationship between the couple that clearly has its ups and downs before finally being resolved in a series of loving embracements.
Throughout the early part, the two dancers astonishingly lift and pull at one in jutting angles that seem to reveal the absolutely awkwardness yet natural draws of their attraction and attachment. Some of their gestures almost represent a kind of salute to the 1920s “apache” dance as they push and pull, at a couple of points Freeland even dragging his partner by the hair across the stage. They may be in love, but is a rough love, a love of male dominance, a kind of “mad rush,” that finally cools down into a sweet, more normative or, at least, more tender series of motions. But like the “apache” dance lovers these two are a forceful duo, who reveal Millepied’s amazing representation of the angularity of his dancer’s body parts, almost portraying an architectonics of dance.

Second Quartet also relied, partly, on nearly impossible positionings of the human body, as Soulier demanded the ensemble to rush with and against each other, dropping, with regularity, into almost comical positions of the floor, suggesting their complete exhaustion in their romantic couplings. Yet, this “chase,” in its constant shifts of gender pairings was not truly as romantic as it was a kind postmodern presentation of the madness and rush of trying to pair up with the right person or persons. The knocking percussion of De Cock’s piece suggests the crazy series of encounters these busy, apparently urban, would-be lovers endure,  reminding one a bit of Robert Longo’s often violently floating images of his “Men in the Cities,” but without the more obvious references to that work made by the Ezralow Dance company (also recently performing at The Wallis). Here, Soulier almost seems to be mocking these figures’ frenzied attempts to find a match.
This was followed by a far sweeter and tender—yet not without its flare ups of significant rebellion and declarations of independence—of what basically is a love duet between the two female dancers Rachelle Rafailedes and Janie Taylor. This lovely 15 minute piece might almost be seen as an antidote to the fast and furious more comic pairings of the Soulier piece. Composer David Lang is one of my very favorites of contemporary composers, and his songs “you will love me” and “you will return,” utterly interlink with the entwining and patterned movements of this female pas de deux.
Perhaps the most rousing and significant of Millipied’s recent dances (also from 2017) was the last work of the evening, Orpheus Highway. Although only 16 minutes in length, the work, both dance upon film and an ensemble piece danced before the screen told a vaguely familiar version of the Orpheus myth, played out this time in rural America, with images of highways, restaurant stops, and, grain silos (conflating the myth of “not looking back” with Lot’s wife, but this time around without the pillar of salt but with a silo of corn). The Reich music is so perfectly matched to the problematics of Orpheus and Eurydice’s love (Orpheus here played by Aaron Carr, Eurydice by Rachelle Rafailedes) accompanied by the exuberant performers, dancing both in sync and out of sync with their cinematic representations, filmed in the almost desert-like landscape of Marfa, Texas, makes for a deeply profoundly narrative—if often inexplicable work (this is no literal telling of the tale)—that one experiences it more like a dream than a retelling of a story of the Gods and their strange ways.
I can’t wait for the return of L.A. Dance to The Wallis this upcoming fall.

Posted by Douglas Messerli at 10:25 AM