THE HAUNTED HOUSE
by Douglas Messerli

Let me begin admitting that my relationship to Luis Buñuel’s 1962 film, The Exterminating Angel, is rather intense. I taught the film, even before there was a restored version (the one I taught was grainy, badly lit, and with hard to read English-language credits) and even before that I had bought the rights to the script from Buñuel’s sons, and published it in English on my Green Integer press. I wrote a longish review of the film for my World Cinema Review in 2011. 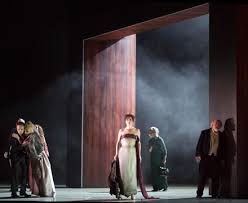 So when the MET opera company announced that they were planning composer Thomas Adès’ new setting of the Buñuel work as an opera in their 2017-18 season, I was obviously pleased and excited, and immediately ordered up tickets for the HD production.
Unable to attend the opening day live broadcast (we had other opera commitments), we caught the Encore production of it yesterday at the Century City AMC theater yesterday afternoon.
I had already read most of the previous reviews which argued, rightfully I believe, that this was the most adventuresome production of the new MET season. For the first time in years, Howard and I were less than impressed by the rest of their season (we have, perhaps seen too many Toscas, La Bohèmes, and Così Fan Tuttis, no matter how excellent these productions might be, to be motivated to attend yet again), although we will certainly attend some of the lesser known of their upcoming productions.
As for the première opera, we were of mixed minds. Adès music, despite the singer’s declarations of its preciseness, seemed more interesting because of its lyrical flights of sound, its often strange use of instruments, “slamming doors, clanging rocks, a rattle with bottle caps, cowbells, a salad bowl, some miniature violins and an ondes Martenot” (which sounds somewhat similar to the science fiction regular instrumentation for the Theremin). With Adès, himself, conducting the music often soars into romantic interludes between playful experimentation—that is when the music can truly be heard. Sometimes the orchestral score seemed quite overwhelmed by the constant voiced sentiments of the 15 on-stage ensemble of quite brilliant singers, almost claustrophobically on-stage together for the entire opera. 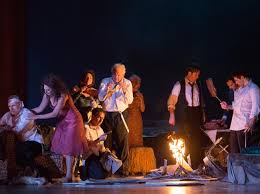 The composer, in turn, gave them an equally wide vocal range, from the bass-baritone pleadings for rationality by Dr. Carlos Conde (Sir John Tomlinson) to the baritone voicings of Alberto Roc (Rod Gilfry) to the tenor intonations of the party’s host Edmundo De Nobile (Joseph Kaiser), the nervous and harried pronouncements of  countertenor Francisco De Ávila (Iestyn Davies), and finally to the super high ranges of the production’s mezzo-sopranos and super-sopranos (Alice Coote and Christine Rice in the former category) and Sophie Bevan as Beatriz, Amanda Echalaz (as the hostess, Lucía De Nobile) and the amazing Audrey Luna, who as the opera-singer, Leticia Maynar, who is asked to reach into the stratosphere for a A above high C, the very highest note ever achieved, apparently, on the MET stage. I have to admit, it’s almost out of hearing range, and sounds more like a high animal bark that a human musical expression—but I believe that may have been what the composer intended, and the fact that she could even accomplish it is quite amazing. This opera is clearly not for sissies, as all of the performers made clear during the brief intermission.
But what they nearly all expressed, as well, is that Buñuel’s work is basically incomprehensible, that, as a surrealist masterwork, it is not really important to explain it, but to simply experience it. 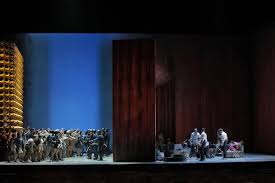 I would argue, and I have, that this is not quite true. First of all, I’d insist, this Buñuel work is not truly surrealist as much as it is allegorical and even symbolic. It has been perceived as many, including me, as a statement about the wealthy Spaniards in the time of Franco who simply could not act in the time of crisis. Thus these wealthy individuals, despite their moral druthers, cannot even leave the party to which they were invited. Like so many of us, who attend grand events that perhaps we might like to have skipped, they have become imprisoned by their social whirl. And like the animals which the hostess has apparently employed to present an entertaining evening, three sheep and a somewhat terrifying bear, they quickly alternate, once their perceive their own trapped condition, between timidity and dangerous bestiality, turning upon one another and, finally, the host, who has so very kindly invited them, ready to murder him in order to atone for their own inabilities to release themselves from the spell of their wealth and position. These people, as Leticia has been described, are Valkyries, warrior savages who will destroy the entire world in order to survive.
In Buñuel’s original film, he makes it clear that these near savage beings, unlike the numerous workers they employ, who immediately recognize something bad is coming, walk like blind men into their own trap, unable to learn anything from history. The filmmaker immediately establishes this fact early in the work (and which Adès repeats the scene in his opera), by having the very first scene when the group returns from the opera, play out yet again for a second time, as if in a kind of loop tape, making it clear that they have all emphatically chosen their destinies without even imaging that they might once more be playing out the past.
Again, in the film, after they are finally magically released from their spell by returning to the beginning—the very positions in which they had stood and sat that very first night which spun them into their somnambulism for several weeks—they return to “normal” life, and determining to celebrate their salvation, attend a church service, from which, when it is time to leave, both the clergymen and congregants are once more unable to exit. Outside we vaguely see Franco’s henchmen rounding up and killing the locals as the clergy and their wealthy parishioners return to sit down in their pews to pray for their release from their own passivity.
Unfortunately, Adès and his librettist, Tom Cairns have jettisoned the important final scene, and focus instead on the haunted house aspects of the director’s drama, making it all seem like the whole was simply a magic spell, and heaping much of the evil of the entire group on the one gay (and incestuous) character, the hyperventilating, pill-popping Francisco (a role which The Guardian’s Observer particularly dismissed).  Even as the group makes the ever-so-slight perception that they are destined to repeat events time and again until they comprehend the significance of their behavior, Leticia sings a final aria that seems almost a dedication to a kind of spiritual afterlife (perhaps the composer’s suggestion of their final church-going event). Yet, it muddied the work, simply seeming to redeem their previous savage behaviors, so much so, that my companion Howard, who has never seen the film, whispered, “I don’t get it, did they all die?” 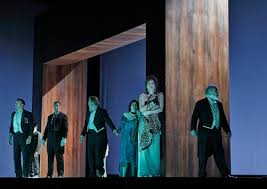 Of course, in the end, these people are all dead, even if they feel that they have freed themselves. But since they will never learn from history, they and their ilk will time and again bond to never challenge the horrific authoritarians in their midst. And that, obviously, has great meaning today in the US and other countries. While those of us who sense there is something terrible going on and might bail ship, these men and women will not be able to truly challenge the dictators who arise from amongst our midst again and again. By the time of his film, we must recall, the atheist, Communist-leaning Buñuel had almost abandoned his more aesthetic surrealist experiments for the far more socially oriented studies such as The Young and the Damned and Robinson Crusoe. Yet the group he explores in this work became the center of his later studies in the class warfare and satire of Belle de Jour, Tristana , and That Obscure Object of Desire. The surrealist had become a social commentator.
That is not to dismiss Adès significant work. This opera, if nothing else, just because of its complex web of ideas and his musical genius certainly does deserve to become part of the standard operatic repertory. Like John Adams’ Nixon in China, also a problematic and not entirely satisfying work, the opera’s very conceptual perplexities are also part of its significance, its challenge to audiences who truly care about serious contemporary opera. And I almost wept tears of joy by the end of the opera, which is perhaps one of the grueling and splendid of ensemble pieces one can imagine. Hopefully, we can look forward to later productions that might more simply clarify the somewhat muddied implications of the current production.