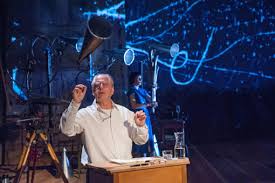 Described as a multimedia chamber opera, South African artist William Kentridge’s Refuse the Hour explores various notions of time while querying if one mightn’t “hold our breaths against time.” But as Henri Bergson has long argued, time is life itself, an inexorable force that no matter what we attempt to do will ultimately swallow us up. Strangely, Kentridge makes utterly no mention of Bergson in his narration of shifting notions of time, beginning with the mythic story of Perseus.
In the Perseus myth, if you recall, the King of Argos, Acrisius, having borne only a daughter, consults the oracle of Delphi, who warns him that in the future he will be killed by his daughter’s son. To protect himself, Arcrisius keeps Danaë in a bronze chamber, but Zeus, nonetheless, visits her as a shower of gold, impregnating her and producing a son, Perseus. After killing the dreaded Medusa and accomplishing other marvelous deeds, the young hero stops by for athletic games in Larissa, instead of returning to Argos. There he throws a quoit that happens to hit and kill Acrisius, who unexpectedly is visiting the events, and thus the prophecy is fulfilled. In short, time here is inevitable simply because the gods have willed it. Coincidence, so suggests Kentridge, is everything and cannot be held back.
Soon after, behind a set that includes Leonardo da Vinci-inspired diagrams, bike wheels, megaphones (presumably representing the possibility of amplifying time through sound), and numerous other time-related images by scenic designer Sabine Theunissen and machine designers, Christoff Wolmarans, Louis Olivier, and Jonas Lundquist, Kentridge as narrator explores various other developments of time, including three giant metronomes, a  brief discussion of how photography and film both stopped and captured time, and the imposition on native cultures of Western-based time with the establishment of international time zones and the synchronization of clocks, which, as one black singer cries out, wipes out their sun, forcing various native cultures to, quite literally, get “in sync” with the very cultures that will later destroy them.
Later, Kentridge hints of Einstein’s theory of relativity and discusses how time will ultimately come to an end when the earth is swallowed up by a black hole—all the while presenting himself as a procrastinating artist pacing back and forth with indecision. 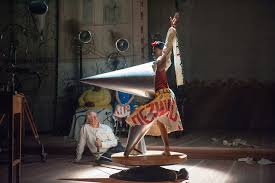 All of these frolics are played out with several marvelous video images by Catherine Meyburgh, the music of composer Philip Miller, and the stunning dances of Dada Masilo, who at one point, standing on a small turning pedestal holds megaphones on her arm, head, and legs simultaneously, while bearing the weight of the narrator on her back.
Singer Joanna Dudley takes music is various directions, sometimes singing lines backwards in a puff of undoing/unsaying, the way we might read images that are being quickly rewound. The wonderful Ann Masina sings short arias that imitate everything from Berlioz to set poems of English Romanticists such as Keats to snippets of Gilbert and Sullivan, all accompanied by a small quintet of percussion (Tlale Makhene), violin (Waldo Alexander), trombone (Dan Selsick), piano (Vincenzo Pasquariello), and tuba (Thobeka Thukane), their instruments, quite inexplicably, also hanging from the theater’s ceiling.
Highly enigmatic, a bit overlong even for its 80 minute running time, and not nearly as profound as it wants to be, Refuse the Hour is, nonetheless, a joyful riff on how mankind set a mad world into motion without the ability to undo its imperious forward movement. My only wish is that rather than “refusing” time or demurring to its hectic forward rush, that Kentridge might have found a way to show us more clearly how to simply live in the moment. His often humorous and lushly melodious antics, however, certainly give us a clue of how to enjoy ourselves in our brief time on earth.

Posted by Douglas Messerli at 8:30 AM