Miya and others (in the film version of West Side Story) 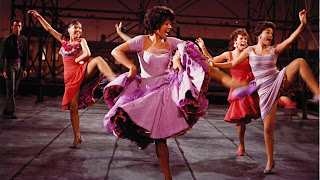 One of the wittiest, most charming and problematic—it’s difficult to even talk about it, given the recent devastating hurricane to hit Puerto Rico and the government’s basic ignorance of the immense destruction—has to be Bernstein’s and Sondheim’s song “America” from West Side Story.
In the original musical, it’s basically a dialogue between the Shark gang’s women, a kind of musical lark; but in the movie version it grew into a major statement of the differences between the gang-males and their far more assimilated girls. But it was still, and remains today, a dialogue between their love of their homeland and the problems they face in the US, despite the fact that Puerto Rico, we must reminds ourselves, is part of the US.
There are so many painful reminders of the difficulties of living in this Caribbean paradise, “the hurricanes blowing,” “the money owing,” that are still so relevant today, that it’s almost difficult to talk about this incredible piece of music (and dance, which I discussed previously in my profile of the best film dance numbers in My Year 2000).
I grew up, from age 15 on, loving this song, so, I suppose, it’s difficult even today to speak of it coherently. The incredible musical rhythms that Bernstein gave it, the hot Latin emphatic rhythmic patterns which emphasize words that would never be accented in English (“I,” “Be,” “America” of the phrase “I Like to Be in America, etc.) The Jets suddenly appear to be straight as apple pie after this incredible concoction. This song, more than any other, gives you a sense of what it is to be Spanish (as the singers themselves put it, “a Spic” in Manhattan). They are so more vital in their singing and dancing that the audience must simply lay down any prejudices and realize the very vitality of their culture. The Jets just can’t get up this kind of energy, even in their later Jazz-inspired dance number.
And, despite, what I always thought a terribly bad introductory lyric by Sondheim, “I like the Island Manhattan  / Smoke on your pipe and put that in!”—presumably a Spanish-language mangled version of “Put that in your pipe and smoke it!”—by and large it’s one of the best back-and-forth arguments ever presented in musical theater. It’s so much more profound than a song like Irving Berlin’s “I Can Do Anything Better Than You,” even if it involves, like that song, a one-up-man-ship pattern (in the original all-woman presentation):

ANITA
Puerto Rico . . .
You ugly island . . .
Island of tropic diseases.
Always the hurricanes blowing,
Always the population growing . . .
And the money owing,
And the babies crying,
And the bullets flying.
I like the island Manhattan.
Smoke on your pipe and put that in!

ANITA
I know a boat you can get on.

ANITA
Hundreds of people in each room!

ANITA
If there's a road you can drive on.

ROSALIA
I'll give my cousins a free ride.

ANITA
How you get all of them inside?

All of this banter ends, finally with the wonderful interchange:

ROSALIA
When I will go back to San Juan.

ANITA
When you will shut up and get gone?

ROSALIA
Everyone there will give big cheer!

ANITA
Everyone there will have moved here!

Too bad the original Jerome Robbins dance didn’t perceive that the same debate was so much more powerful when the males spoke about return and the females about their love of the new country. Isn’t that what the entire Shark battle is all about; they can’t quite adapt to their new country, and they must fight to create their territory. The women, on the other hand, have already completely assimilated. Sondheim’s lyrics had already established that, and the movie version brilliantly expresses their survival in the new world. Yet the Broadway, all woman, cat-fight is wonderful is well.

Posted by Douglas Messerli at 12:33 PM