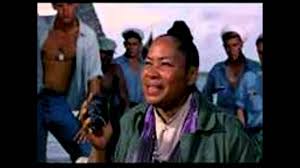 What can one say about the most alluring tune in Rodgers and Hammerstein’s South Pacific. In this piece the original Bloody Mary, perceiving the young Lieutenant Cable (William Tabbert in the original Broadway production, and the handsome John Kerr in the movie) as “saxy,” the production surrounded him by equally sexy young Seabees in a song that seduces him to take the voyage to the island of Bali Ha’i, where he will meet and fall in love with Bloody Mary’s beautiful daughter, Liat—despite his angry inability to marry her because of her island racial ethnicity.
Except for his later song, “You’ve Got to Be Carefully Taught,” it is the most fraught racial song ever sung. In the original the amazing African-Asian singer Juanita Hall quite literally opens him up to a new world of possibilities, of his “own special island,” with:

Your own special hopes,
Your own special dreams,
Bloom on the hillside
And shine in the streams.
If you try, you'll find me
Where the sky meets the sea.
"Here am I your special island
Come to me, Come to me."

Seduction was never more beautiful and successful than in Hall’s incredible rendering of Rodgers’ and Hammerstein’s haunting tune and lyrics.
Unfortunately, by the time of the movie, Hall’s amazing voice had begun to waver a bit over the higher registers of that song, and despite a truly credible recording which I’ve included above, and 900 performances on the Broadway stage, the imperious Richard Rodgers, who had always preferred the English performer, Muriel Smith’s version, insisted that they dub the performance. Smith clearly does a credible job, but Hall’s somewhat rougher cut gives a remarkable edge to the performance which I truly prefer.
Others, Peggy Lee, even Frank Sinatra and Perry Cuomo later performed it, sometimes, particularly in Lee’s case, quite credibly, despite the sentimental Hawaiian and other orchestral flourishes in Sinatra’s and Cumo’s version. But even the wonderful 2008 revival with the wonderful Kelli O’Hara and Paulo Szot, which I saw at Lincoln Center, with Loretta Ables Sayre as Bloody Mary could not come close to Juanita Hall’s rendition. And like the film director Joshua Logan has admitted, I wish they’d kept Hall’s voice in the film; but then, hardly anyone in the film was not dubbed, Hollywood presumably unable to trust some of their casts’ singing voices, Giorgio Tozzi dubbing the voice of Rosanno Brazzi.
Personally, I hated the colored lenses of Logan’s film, but in “Bali H’ai,” which turns the landscape from a sunny day to a deep purple wonderment, it’s nearly perfect. Who wouldn’t want to visit that “special island.”

Posted by Douglas Messerli at 12:05 PM