Charles Atlas (as photographer) and Rashaun Mitchell and Silas Riener (as co-choreographers) and principle dancers have created in Tesseract, performed this past week Redcat (the Roy and Edna Disney/CalArts Theater) within the bowels the Walt Disney Concert Hall in downtown Los Angeles. All three long worked as video director and dancers for Merce Cunningham, and joined up after Cunningham’s death to create their own dance collaborations.

There is no question that their art still retains a great many of the hallmarks of Cunningham’s company, including their hours of rehearsal without music and their use of quirky and muscular positionings of their bodies, as well as stunning original costumes and carefully-timed group patterning.
Yet, in Tesseract and other works on which the two beautiful dancers have collaborated with a talented company, some of whom also worked with Cunningham (in particular, David Rafael Botana), and others who have had long experience in dance and choreography themselves, they have also created something very different wherein, despite the work’s overall abstractness, also carries with it subtle narrative patterns.
Tesseract was broken into two acts, the first of which, Tesseract ⸋ is performed on video only and the second of which Tesseract ○ is performed live behind a scrim on which a camera projects various of their on-stage movements in expanded form.
The two symbols, cube and circle, hint at the various patterns upon which are played out in the general movements of the entire company. The first, which Atlas has described as a kind of sci-fi story about a group of space aliens, who at times speak in absolute gibberish, while dressed in beautiful white costumes with black cubes attached to them. creating a kind of double-cube patterning or what Los Angeles Times dance reviewer, Laura Bleiberg, pointed out, becomes a cube prism (the costumes having been also designed by the two choreographers). 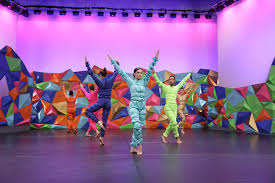 In one of the most specular moments of this first part, the figures, backed by large colorful geometric patterns are turned through the tricks of video art into one large kaleidoscopic wonderment. My theater companion for the evening, Deborah Meadows, told me how much as a child she loved her kaleidoscope, playing with it for hours at a time, as had I.
Yet, I believe the sci-fi aspect of this part to be less convincing than simply a story (if one can imagine one) of a communal group, coming and going, sometimes forcing out one another, while attempting to play out their various sexual feelings for each another. The first piece ends with a stunning sexual pas de deux between Mitchell and Riener, the later having let down his beautiful long tresses (which he previously has worn as a bun in the back his head), while he makes amazing terpsichorean love to Mitchell.
The only thing I found a bit distracting about this first section, as well somewhat inexplicable, was the constant re-framing of the video dancers, with black borders coming in from both sides. But in a piece that is constantly suggesting a reality from different perspectives, sometimes creating a kind of startling visual confusion, in which, particularly in the later part, it is difficult to know whether to center one’s gaze on the dancers or upon the cinematic-like images, it is surely an intentional device to help us to perceive that human eyes can never truly take in the whole of a group dance performance. Our focus is constantly shifting. For the first section of the dance, the audience members were asked to don 3-D glasses, which also took the work into other dimensions.
The second part of Tesseract begins very much like the first with a pattern of a cube, the figures this time clad in mesh-textured white robes, who enter, one by one, to fit into the pattern; but as the group expands, breaking away into other lesser connected groups, they come together as a circle of interlocking hands. When one of their midst seems to suffer from a series of muscle spasms, he breaks way from the others, as several of them try, unsuccessfully, it appears, to bring him back into the community. It is perhaps only when the red-clad cameraman, Ryan Jenkins, whose images project the same dancers in giant-size images on the scrim, that allows them each, one by one, to come into their own individuality, while retaining on the stage behind a sense of communal ritual that vaguely reminded me, at moments, of Stravinsky’s and Nijinsky’s powerful Rite of Spring, but of course without the insistent narrative aspects of that work. These are neither primitives nor a community determined to sacrifice one of their own for anything, but simply a communal gathering working to interact (or even “tesseract,” a word that suggests a wrinkle in time-traveling) with each other. In the end, even the red-garbed, sequined-shoed cameraman joins in on their strenuous group celebration.
I do agree with Bleiberg that, as much as I truly love the Redcat space, perhaps Tesseract might have been more successfully performed on a large stage such as Brooklyn’s BAM. Evidently some couldn’t observe the interplay of images and performers, particularly from the higher levels of the theater. I sat closer to the stage and had no difficulty perceiving them. But these are minor quibbles about a major work which I was delighted to see on a Los Angeles stage, and can only congratulate the Redcat staff for scheduling it.