“The Ballad of Mack the Knife” (popularly known as simply “Mack the Knife”) was written by Kurt Weill for Bertolt Brecht’s and his current lover Elisabeth Hauptmann’s 1928 musical opera, Die Dreigroschenoper (The Threepenny Opera), based on John Gay’s English work, The Beggar’s Opera of the 18th century. Although usually the libretto is attributed only to Brecht, it was Hauptmann who first brought the idea to her then-lover and her translated Gay’s work into German, and she probably contributed far more to the script.
This powerful song, sung by the character Jenny (Lotte Lenya, Weill’s wife) is sung as a kind of preface to the work, and recounts the crimes of Macheath (Mack the Knife) and his wiles with women. The piece sets the tone for the rest of the musical, filled as it is with deep cynicism and a sense of foreboding, particularly with the backdrop of London’s Solo just before the coronation of Queen Victoria. And we will soon be privy to Macheath’s seductions and his murderous intentions.
The story itself, although highly poignant given its portrayals of the prostitute Jenny and the young innocent Polly Peachum, who as the daughter of the head of London beggars, Jonathan Jeremiah Peachum, is perhaps not as innocent as she first seems. Indeed, by the end of the "opera," she has not only married Macheath, but stands by him, even as he prepares to go to the gallows—saved at the last moment through a pardon from the Queen, granting him a castle and a pension.
Yet Jenny’s early song makes it clear that the world of this musical production is filled with sharks and knives.

Oh, the shark, babe, has such teeth, dear
And it shows them pearly white
Just a jackknife has old MacHeath, babe
And he keeps it, ah, out of sight
Ya know when that shark bites with his teeth, babe
Scarlet billows start to spread
Fancy gloves, oh, wears old MacHeath, babe
So there's never, never a trace of red
Now on the sidewalk, huh, huh, whoo sunny morning, un huh
Lies a body just oozin' life, eek
And someone's sneakin' 'round the corner
Could that someone be Mack the Knife? 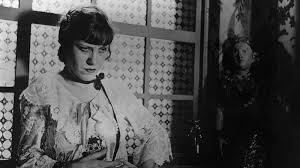 It is not surprising, since her husband wrote it for her, that the song truly belongs to Lotte Lenya. No one has combined the Sprechstimme rhythms, the cabaret musical elements, and the darker psychological intonations better than her, particularly in the German. In the USA there have been at least 5 New York reproductions of the work, with perhaps the most notable one being mounted in 1956 with Lenya singing in English. Since, she claimed, Weill had been influenced music of Louis Armstrong, she made a wonderful recording with him the same year she won a Tony Award for her off-Broadway performance. Bobby Darin, Frank Sinatra, and even Dinah Shore also sang it, but the best jazz version is sung by Ella Fitzgerald, and Jessye Norman, performing in Berlin, takes the work to new heights.

Posted by Douglas Messerli at 7:33 AM