When I began this series of musical theater songs I created a strict artificial rule: I could only pick two songs from any one musical, a determination I made to keep my list from blooming out of possibility to choose simply 50 such favorite titles. For some musicals, of course, this created nearly impossible problems, for example in West Side Story, where one might have chosen nearly every song as a different kind of masterpiece. Fortunately, the limited lyrics of “Maria,” has always rather irked me, and even Sondheim felt his lyrics for “I Feel Pretty” somehow missed the mark. The deeply operatic “A Boy Like Him,” followed by “I Have a Love” is more operatic than strictly song-like; and the wonderfully powerful music and rhythms of “Cool” are more those of dance (which I did discuss as dance in My Year 2000). But then, there is the marvelous “Tonight,” the beautiful marriage ritual performed in “Make of our Hands,” and so many more that wave out with their lovely delights. 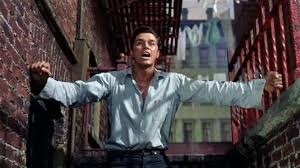 For me, however, if there is one single song that reveals Tony’s utterly romantic sensibility and his total acceptance of his youthful faith and vigor, it is in the driving rhythms and lovely melodic passages when the very air does truly seem to hum in Bernstein’s amazing score of “Something’s Coming.” I can’t imagine a song that more clearly encompasses the feelings of a young man on the brink of adulthood. Bernstein and Sondheim (both probably closeted gay men at the time) gave their character a valentine in this song that presents his utter sexual and social desires, marrying them to his total belief in life. The tragedy of the rest of the musical is based on this foundation, that a young man of such utter belief in the future should never see it come to be. Yes, the “something” does indeed “come,” but, sadly it delivers with it all the failures of the world in which he and we live. Despite his desires, there is no easy way out; death sadly stalks him from his first open pleas of possibility:

Could be!
Who knows?
There's something due any day;
I will know right away,
Soon as it shows.
It may come cannonballing down through the sky,
Gleam in its eye,
Bright as a rose!

Who knows?
It's only just out of reach,
Down the block, on a beach,
Under a tree.
I got a feeling there's a miracle due,
Gonna come true,
Coming to me!

With a click, with a shock,
Phone'll jingle, door'll knock,
Open the latch!
Something's coming, don't know when, but it's soon;
Catch the moon,
One-handed catch!

Around the corner,
Or whistling down the river,
Come on, deliver
To me!
Will it be? Yes, it will.
Maybe just by holding still,
It'll be there!

I quote so many lyrics just to give a sense of the shift of sentiment from possibility to absolute commitment that Sondheim’s lyrics convey. From just the possibility of “who knows,” Tony quickly shifts to a total insistence upon the shock of the new that is waiting “Around the corner,” knowing that it will be “a shock” in which the “Phone’ll jingle, door’ll knock.” And suddenly he moves to the view that it will be “soon,” “whistling down the river.” No song shifts as quickly as its incessant repeating 2/4 rhythms. Completely altering writer Arthur Laurent’s original conceptions of the piece, Bernstein and Sondheim recreated the character through this beautiful song: as he wrote to Laurents:

I missed you all terribly yesterday. We wrote a new song for Tony ["Something’s Coming"] that’s a killer, and it just wasn’t the same not playing it first for you. It’s really going to save his character – a driving 2/4 in the great tradition – but it gives to Tony – so that he doesn’t emerge as just a euphoric dreamer.

Everyone with even a half-way good voice has sung this song (including me in high school; I also sang “Tonight’). Strangely few can achieve its vocal demands, the constant shifts from the everyday wonderment to the heights of its dreamlike possibilities. The wonderful performer, Larry Kert, for example, is marvelous in its dreaming tenor tonalities, but a bit too prosaic in its earlier driving rhythms. Judy Garland’s waving dream-like reading is not truly revealing. And certainly, Streisand’s soaring soprano does great justice to the highlights, but seems to lustfully Franny Brice-like for its earlier stanzas. It’s a young man’s song, and on the television show Glee Darren Criss almost gets it right, despite his inability to pause between stanzas, hitting each new idea just a bit too soon to even allow his mind (and ours) to assimilate the shifts of the imagination.
I just listened again—for what must be the 100th time—before writing this, to Richard Beymer’s version from the movie (the song was dubbed by James Howard Bryant), and I believe that one of the many reasons that the film (Jerome Robbins’ choreography is perhaps the major reason) that this was the best representation of this musical, and perhaps is one of the best musical productions ever made on film, was Beymer’s performance and Bryant's singing. Beymer's true beauty and Bryant's easy transformations from the early driving possibilities to the absolute wonderment of the later parts of the song, are just perfect. Beymer, I must admit, is an acquaintance, who used to attend my poetry salons, and now lives in my home-state of Iowa, with whom I again recently corresponded. But that has little to do with my great admiration of his performance. And Bryant simply gets this marvelous song “right,” where so many others struggled with its marvels. He sings the out the incessant drive fluidly transitioning into the dreamy possibilities without effort. He is both driven and an utter believer who quite brilliantly matches the two. I was just such a youth.
Finally, I feel I chose correctly in including this song from West Side Story when tears welled-up in my eyes as I listened to dozens of renditions. Even the worst of them were delightful. This might truly be the great gem in a glittering setting of marvelous musical jewels.