It’s hard now to even imagine how an basically unsuccessful British musical hall type musical such with unimaginable title, The Roar of the Greasepaint—The Smell of the Crowd might possibly have entered the Broadway stage world. Enter David Merrick, the magical producer of the day, who perceived not only it’s low costs, but its utter charm, and then Merrick could make magic of almost anything, and by demanding that the co-writer Anthony Newley perform against the long-term stage veteran Cyril Ritchard, he created a true musical hit, given its limited 231 performances. But then Newley had already made it as a great performer/lyricist with his Stop the World I Want to Get Off! 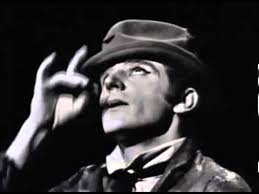 The combination of the two, Ritchard and Newley, re-created a kind of Beckettian social satire that spoke to the British hierarchical social system, but was still not a great musical. But there was something about this particular song that attracted singers, who almost insistently performed it with Newley himself, including Sammy Davis, Jr., Andy Williams, and, even after his death, Barbra Streisand—perhaps just because Newley was so very convincing in his presentation of the original. Almost all claimed deeply personal relationships with the apparently difficult Newley himself.
Perhaps the wizard Merrick had negotiated contractual deals wherein Newley should always appear, yet it appears that the actor himself had a sort of magic that these great artists needed to embrace.
A bit like a Chaplin figure, Newley performs the song with a kind of down-and-out clown-like being who has no other choices but to depend on a love that will truly define his life, and if refused, will mean he has no reason left to survive:

Who can I turn to when nobody needs me?
My heart wants to know and so I must go where destiny leads me
With no star to guide me and no one beside me
I'll go on my way and, after the day, the darkness will hide me

And maybe tomorrow I'll find what I'm after
I'll throw off my sorrow, beg, steal, or borrow my share of laughter
With you I could learn to, with you what a new day
But who can I turn to if you turn away?

It’s a song of desperation, and that’s what gives it such powerful force. There is no other way the Beckett-like character can survive if his lover does not respond. And, in that sense, it’s a pitiable plea that allows the imaginary lover no way out. This is, after all, a parable. But there is no way but to feel the sad sack figure’s despair; he is like anyone who has reached their final end, desperately attempting to find a way back into reality.
The song is so good that nearly anyone who can sing has interpreted it, Shirley Bassey, Dione Warwick, Barbra Streisand, Sammy Davis, Jr., and Andy Williams. But there are so many others that anyone interested should explore. Yet, simply because of the constant need of these singers to bring Newley into their own productions, makes clear that his is a singular interpreter of his own song, his London Hackney dialect dominating any other versions. It ends up simply being an utterly appealing song.