Douglas Messerli | (on "Oh What a Beautiful Mornin'" by Rodgers and Hammerstein, from My Favorite Musical Theater Songs)

“Oh, What a Beautiful Mornin’”

There is perhaps no American song introduction to a Broadway musical more powerful and Rodgers and Hammerstein’s stunningly sunny ballad to American optimism sung by the character Curly McLain. 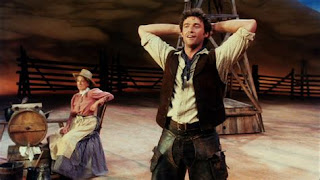 Curly, utterly sure of himself, delights this particular morning in nearly everything, including the fact that the corn of his Oklahoma landscape is “as high as an elephant’s eye” and that the cattle are “standing like statues.” Lyricist Oscar Hammerstein II created a piece of lyrical poetry in this work that nearly everyone recognized as something that threw out the old to bring in a breath of new musical possibilities. As The New York Times reviewer, Brooks Atkinson, wrote: "After a verse like that, sung to a buoyant melody, the banalities of the old musical stage became intolerable."
Over the years, it’s been sung numerous times by marvelous interpreters, including the original 1943 cast Curly, Alfred Drake and the film actor Gordon MacRae. Frank Sinatra’s 1943 version was too gaffed up and kitsch for my taste, as was Rosemary Clooney’s jazzed 1950’s version. But Peggy Lee got it right again for her 1952 rendition, and Ray Charles, Hugh Jackman, and James Taylor all sang it quite beautifully. Jackman was particularly good in the very last hushed tones of the song, which brought the haze on meadow into aural reality.
Few songs in the American songbook so perfectly captured the uninhibited belief in the American experience until Bernstein’s “Something’s Comin,’” and both characters, because of their hubris, must suffer a series of painful experiences in their search for their loves. If Curly seems to get away better than Tony in West Side Story it is surely a matter of the times, yet even he and Laurey must suffer threats and death before they can move on with their lives.
Oklahoma!, moreover, is a musical with such a panoply of brilliant musical numbers that it’s hard to choose just “one” other song—the arbitrary limit I’ve imposed on myself.
Los Angeles, January 26, 2018
Posted by Douglas Messerli at 11:57 AM No comments: