the best of all possible productions—to date
by Douglas Messerli

It is something short of a miracle that Leonard Bernstein’s Candide ever came to be produced. Spear-headed, in part, by Lillian Hellman’s desire to work with Bernstein, after having a touch of operatic experience with composer Marc Blitzstein, who adapted her The Little Foxes into an opera he retitled Regina, the tough-minded Hellman contacted Bernstein about the idea of adapting Voltaire’s satiric polemic against Leibniz’s concepts and all religious proclamations.
She (and Bernstein) and other of their friends, including Bernstein’s mentor Aaron Copland, had recently been targets of U.S. senator Joseph McCarthy’s House Un-American Activities Committee, and had all accumulated rather thick files in J. Edgar Hoover’s FBI investigations. Just a few years previous, Arthur Miller, also attacked by McCarthy and Hoover, had written The Crucible, an attack, using the Salem witch trials as a metaphor, about McCarthy and his committee’s activities. And Hellman, even more a polemicist than Voltaire, and without his light satiric abilities, thought the material perfect for the time. I’m sure Bernstein felt that he couldn’t resist it.
She wanted academic poet Richard Wilbur to write the lyrics, but—fortunately, at least at first—he declined. So this pair of high celebrities turned to clever lyricist John Latouche (previously the lyricist for Vernon Duke’s lovely Cabin in the Sky, Jerome Moross’ Ballet Ballads and the same composer’s The Golden Apple), despite knowing that he, as word had gotten out, was difficult to work with. Bernstein had long been a friend with Latouche, and the lyricist was also friends with nearly every major figure of the large gay-filled world of the 1950s, including Copland, Virgil Thomson, Marc Blitzstein, playwright Tennessee Williams, writers Jane and Paul Bowles, W. H. Auden, Frank O’Hara, and numerous others, bedding with many of them or simply enchanting them with his recontour wit. If perceived as a difficult figure, he was also much beloved, most, as friend Carson McCullers recalling, ignoring his occasional eccentric behavior. In that last five years of his life he lived with poet and later opera lyricist, Kenward Elmslie.
Hellman, who despite her liberal pose in society and her supposed advocation of lesbianism in her early play The Children’s Hour, immediately took a dislike to Latouche, in part because he was “queer.”
But very soon, everybody, except evidently Bernstein, became intimidated by her imperial hand, and the music ground down to a halt, also due to Latouche’s weekly disappearances and his other commitments—a situation in which he continually found himself throughout his short life—including the libretto for Douglas Moore’s highly successful opera, The Ballad of Baby Doe. Even Bernstein, also working on his musical West Side Story decided to take a break from the difficult musical.
Bernstein, finally frustrated with Latouche’s lack of attention to his project, replaced him with Wilbur, who had now signed on, despite his lack of experience with theatrical lyricism, and the musical further suffered from his continued re-adaption of Latouche’s quite clever lyrics in Act I and his often clumsy renditions of Act II songs, many of which were originally attempted by Bernstein and Hellman themselves, only one of which, the Old Lady’s tango “I’m Easily Assimilated,” written by Bernstein with Spanish lyrics by his wife Felicia, and whose tempo was wryly noted by the composer as “moderato hassidicamente,”was quite wonderful, the others of which fell flat of Latouche’s first act pieces.
The witty Dorothy Parker was also brought aboard to write lyrics, but soon left, leaving only one piece behind “The Marquise’s Gavotte,” which has now completely disappeared in the newest incarnation which I saw at the LA Opera production. Parker soon fled the scene as well, declaring that it had “too many geniuses.”
Poet, novelist, and critic James Agee also was briefly asked to contribute lyrics, but his death in May 1955, when the production was finally beginning to gel, precluded his involvement.
Latouche presumably continued with the project, retreating to his Calais, Vermont retreat—presumably not yet hearing that he had been replaced by Wilbur—to further work on the lyrics, he also dying of a “coronary occlusion” in August 1956, before the work’s premiere.
In the months before the Broadway production, most of Latouche’s lyrics were revised by Wilbur, many of them of them no so felicitously. Howard Pollack, in his recent biography of Latouche recounts at least one such revision, which is retained in the LA Opera version.

latuoche’s version:
Dearest lady, pray explain,
I had thought you slain;
Thought you rudely violated too.

wilbur’s version:
Dearest, how can this be so?
You were dead, you know.
You were shot and bayoneted, too.

The later clearly moves away from Voltaire, completely ignoring his illusion to her rape.
In another last moment change, Latouche’s clever “This is a perfect day for an auto-de-fé” was expunged because it was presumed no one might know what auto-de-fé meant. Characters were deleted, songs dropped, others replacing them. By the time Candide, after a tryout in Boston, reached New York, it was, as critic Walter Kerr declared—despite its marvelous music, incredible costumes and sets, and an incomparable cast of Barbara Cook, Robert Rounseville, Max Adrian, and Irra Petina—“a really spectacular disaster.” Candide was a musical flop, lasting only 73 performances, despite several other very positive reviews. Over the years, Bernstein constantly revised it, throwing out songs and adding new ones, and others continued to rewrite it along with him. I saw a failed production of the musical at the Washington, D.C. The Kennedy Center in the 1970s. Even given my desire for the success of the production, I remember it as a failure.
The new LAOpera production, which I saw the other evening has completely expunged Lillian Hellman (good riddance) for a new adaptation by Hugh Wheeler, in yet a new version by British John Caird, who rewrote it for the Royal National Theatre. Our program lists further lyrics by Stephen Sondheim. Now it is extraordinarily difficult to know who has written what, although it seems that Latouche’s “Auto-de-fé” lyrics have been returned, and his early versions of “The Best of All Possible Worlds” and other songs have been retained. 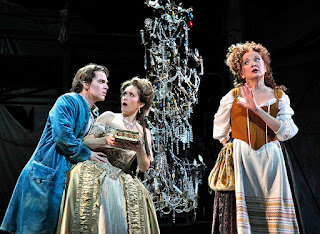 The first act of this opera remains still a remarkable piece of theater, with Bernstein’s amazing overture, the best of almost any opera/theatrical piece—whatever you want to call the work—that has ever existed, and James Conlon, despite the limited acoustics of the Dorothy Chandler Pavilion, did it justice. I just wish it had sounded as blended as I sure it does up closer.
The cast, with Kelsey Grammer playing both Voltaire, now a link connecting the various aspects of an extraordinarily episodic plot, and Pangloss; the wonderful Broadway singer Christine Ebersole playing the Old Lady; and two gloriously new singers, who I am sure we will be hearing more of soon, Jack Swanson as Candide and Erin Morley as Cunegonde.
Morley has already begun an illustrious career as an opera singer, and I’m sure she will go further quickly. Swanson, a relative neophyte, was the real surprise of the night. A wonderful singer, a handsome and appealing actor, I can only hope he makes a career as a delightful operatic presence; he was certainly appealing in this role.
Christine Ebersole, whom I have seen in other roles, was simply marvelous as The Old Lady, but I wanted more! And the role simply didn’t provide it. Just another song would have been perfect.
Grammar, a good actor and a passable singer, simply didn’t have the acoustical lungs to lift his words up to the balcony. I may be gradually losing my hearing, but most of us agreed he simply couldn’t be heard when he spoke. Ebersole came through nicely, and all the music came across quite accessibly, but Grammar’s voice just didn’t have the lung power to reach the entire audience, alas.
Yet, overall, despite the problems of the second act’s episodic adventures, already laid out in the first act—which I would argue is the real problem with this Bernstein work (too bad Latouche was not retained to create a more clever body of poetry for the second act)—the theater piece which even Bernstein could never quite define, and is, after all, even after its hundreds of revisions, a truly “holy mess,” worked beautifully, stirring up the entire audience to rounds of applause.
And why complain? As James Conlon has described it in his brief introduction:

“Bernstein’s Candide wanders the musical world in a kaleidoscopic succession of styles and acquisitions: jazz, Broadway, Stravinsky, neo-Baroque, operetta, tango, the world of his American contemporaries and even, in some versions, a Schoenbergian 12-tone row. And, of course, there is Mahler, a composer with whom Bernstein identified deeply.”

Then there is Kurt Weill, the great German composer of so many of Brecht’s most serious dramas. Even Lotte Lenya, Weill’s wife, recognized Bernstein’s understanding of that composer’s work. In Weill’s wild assimilation of popular and classical musical tropes, he tried to bring the masses into a far more serious operatic tradition than they might have imagined they were experiencing. Bernstein wanted the same thing. 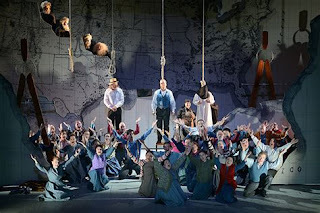 And I think, in the performance I saw the other night, Bernstein achieved that. I was amazed how the audience, a wide range of individuals, did not suddenly stand in immediate obeisance of what they had just experienced—a standard procedure of LAOpera audiences—but sat in their seats applauding again and again and again in delight for the performances. I think we were all, after the last Mahleresque ballad, which is the true heart of so many Bernstein works, “Make Our Garden Grow,” we were all in tears:

And let us try before we die
to make some sense of life.
We’re neither pure nor wise, nor good:
we’ll do the best we know.

I knew, as I think the audience also did, that I had just seen the best version of this terribly flawed musical extravaganza that might be possible. And, yes, it is the best of all possible productions. As Pangloss asks: “Any questions?”