Listening yesterday to over 10 versions of Kurt Weill’s and Bertolt Brecht’s central song in their Sprechstimme operetta, The Rise and Fall of the City of Mahagonny (Aufstieg und Fall der Stadt Mahagonny (1930), I realized that this just pre-Hitler work (the music was composed in the late 1920s), was perhaps the culmination of the Weimar Republic’s cynical visions of the need for alcohol, love, and, most importantly, money. There has never been a more cynical song which simultaneously survives a beautiful ballad. It’s a song that you can equally love and  hate, yet want to listen to over and over again. And apparently anyone with a good voice and the guts to perform such a raunchy piece, has attempted it. 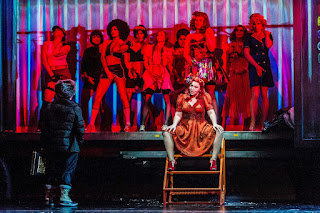 Lotte Lenya, the original singer, still sounds right to me, with her raspy German cabaret voice; she was after all the composer’s wife, a perfect interpreter, with whom, in one recording, Weill performs alongside. But you can’t not love David Bowie’ version (two performances of which I have included, although I wish he might have kept the original lyrics, with the pretty boys instead of pretty girls, given his own sexual ambiguity), Marianne Faithfull’s, and Audra McDonald’s later performance of it just for their attempts to embrace such a problematic song in their repertoires.
Nina Simone tunes it down, actually using the Sprechstimme techniques to tell the story of the early choruses, before suddenly breaking into her wonderful renditions of the “Moon of Alabama” interjections. She’s also such an excellent pianist that she can torture all the dissonance out of the song. The Doors’ version may be one of the best! And Ute Lemper is always the wonderful interpreter of Weill songs that made her famous. Nina Hagen does an almost drag version, which is perhaps not a best interpretation of the woman who wants whiskey, pretty boys, and dollars as fast as she can get them—or she'll will die:

Oh moon of Alabama
We now must say goodbye
We've lost our good old mamma
And must have whiskey
Oh, you know why.

Oh moon of Alabama
We now must say goodbye
We've lost our good old mama
And must have boys
Oh, you know why.

Oh moon of Alabama
We now must say goodbye
We've lost our good old mama
And must have dollars
Oh, you know why.

This is a world in which everything of importance in the past has died, and the survivors expect that they won’t survive either, the fact of which, obviously was borne out in Hitler’s World War II destructions of his own people; yet here, the same fate is projected onto the American experience.
It’s utterly amazing to me how such a truly terrifying view of the world is rendered tragically beautiful in Kurt Weill’s version, with its memory of the moon of Alabama constantly vying with the terrible demands of human sexuality, drugs, and their need of financial sustenance. This song is a lesson in human failure and depravity without consigning its singers to Hell. I believe no American-born writer could possibly write such a remarkable piece of music. It came right out of the raw Weimar experience, even though it pretends to be in a fantasy America somewhere between Alaska and Alabama.
Los Angeles, February 27, 2018
Posted by greenintegerblog at 9:18 AM