Douglas Messerli | on "On the Street Where You Live" from My Fair Lady, from My Favorite Musical Songs

“On the Street Where You Live” 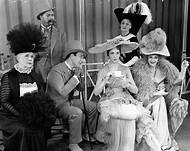 Frederick Loewe’s and Alan Jay Lerner’s great 1956 musical, My Fair Lady, has often been described as “the perfect musical.” While it is a truly memorable work, I don’t think I would go so far to describe it is “perfect,” or maybe it’s just that I like my musicals with a little roughness around the edges; after all to create a musical is to almost defy all odds, combining the musical skills of opera with theater, an very odd mixing that perhaps only the odd British pair of Gilbert and Sullivan truly achieved, and even they often failed. But there are so many wonderful songs in My Fair Lady—"Wouldn't It Be Loverly?"; "With a Little Bit of Luck"; "The Rain in Spain"; "I Could Have Danced All Night"; "Get Me to the Church on Time”; and "I've Grown Accustomed to Her Face" among them that it becomes difficult to choose simply two musical numbers to represent it. 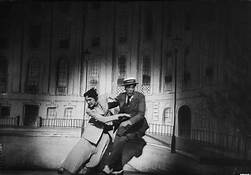 I’ve chosen the standard “On the Street Where You Live,” an odd choice when you think that the singer of this beautiful ballad is the musical’s fool, Freddy Eynsford-Hill, a kind of idiotic ninny who falls in love with Eliza Doolittle simply because she speaks a kind of street-talk he, born wealthy but without any money himself, has probably never heard before.
If there was ever an example of the inside/outside dichotomy (this year’s overriding concern) it certainly is this song, for Eliza, as a poor flower-seller, has most of her life on the street, while silly Freddy has lived in the post Belgrave area of London, into which Eliza has suddenly ensconced herself given Henry Higgins’ absurd game-playing attempts to transform her into a princess. If Higgins, moreover, is a self-dedicated bachelor (which in those days was code for being gay), poor Freddy really does seem to be a would-be romantically inclined “lover,” although his effeteness is also a theme of the work. But he, who has been protected in the inside, is now a dedicated to the street, at least the street where Eliza lives, and will not even enter the house, preferring the simply walk down the street where he has countless times before. In short their roles have been completely reversed.

I have often walked
Down this street before,
But the pavement always
Stayed beneath my feet before.
All at once am I
Several stories high,
Knowing I'm on the street where you live.

Are there lilac trees
In the heart of town?
Can you hear a lark in any other part of town?
Does enchantment pour
Out of every door?
No, it's just on the street where you live.

Even Eliza eventually, despite the brutal sexism of Henry, rejects Freddy’s high romanticism, in her cry of “Words, words, words,” and her demand that instead of talking that he should “show her,” in other words, grab her and kiss. Freddy is all words, but the words (and music) of the Lerner and Loewe song are so soaring that we forgive the nincompoop and would simply love him to reprise the song.
Almost every male singer in the musical world did sing this song, including Vic Damone, Eddie Fischer, Nat King Cole, Dean Martin, Andy Williams, and Harry Connick, Jr., and they all sang it well. But I still prefer John Michael King’s original version, where he sings with such absolute belief in that magical street that you’re almost convinced.

Posted by greenintegerblog at 10:17 AM