dream and language
by Douglas Messerli

Henri Cain (libretto, based on the story by Charles Perreault), Jules Massenet (composer) Cendrillon / 1899; the production I saw was the Metropolitan Opera’s live HD production on April 29, 2018

Jules Massenet’s 1899 Cinderalla-based opera, Cendrillon, was a big hit upon its premiere at Paris’ Opéra-Comique; but only this year received a production for the first time at New York’s Metropolitan Opera. Tastes changed early in the 20th century, and Massenet’s beautiful scores, with their tributes to everyone from Mendelsohn to Wagner, with a few stops for Mozart and Strauss along the way grew out of favor. But the fact that Cendrillon had never previously made it to Broadway seems to be a particularly sad event.
Fortunately, the great American mezzo-soprano, Joyce DiDonato rediscovered the work (after it had performed by Frederica von Stade) more than a decade ago and warmed up to it playing in a Laurent Pelly production (he also designed the remarkable costumes) in Santa Fe, London, Brussels, and elsewhere. As a regular in MET productions, it was perhaps inevitable that eventually DiDonato would be featured in a production in New York; and we can now hope that, given its great success, it may join the MET repertoire. Certainly, it was visionary of the MET to include it their famed live HD series, which my husband Howard and I saw yesterday in a Los Angeles movie theater, and which may help make it a production which audiences will embrace. The elderly audience with whom we saw it loved it. 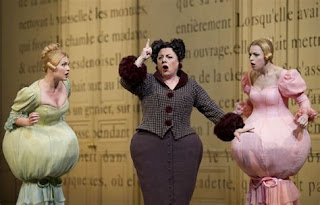 Unlike Rossini’s better known La Cenerentola (in which DiDonato has also performed the Cinderalla role), the Massenet version does not focus as much on the young step-daughter’s ill treatment as much as it does on the fairy-tale elements of the work, going back to the original Perreault story for its source. The mean step-mother is this version, with her two fawning and fairly ignorant daughters, is much closer to the mother and daughters of Beauty and the Beast than the wicked figures of Rossini’s world.
Like Belle, Massenet’s Lucette (Cinderalla’s real name in this version) basically accepts her life as a cleaning woman to the vain stepmother, Madame de la Haltière (the always wonderful Stephanie Blythe) and her almost-idiot like step-sisters, dressed in comical-like balloon-like dresses that evidently stand for the haute-couture of the day. In comparison, at least in the early scenes, Lucette looks like a peasant woman from a Verdi opera. And despite her hard life, she is deeply loved still by her weak-willed father, Pandolfe (Laurent Naouri) who, after his wife’s death, inexplicably chose this monstrous woman of a self-declared royal background. It may be that his little farm in the forest was simply not successful enough to pay the rent. Now the man simply suffers for his horrible mistake, his daughter paying the punishment for the crime.

Most of Lucette’s life, when she isn't busy cleaning up the story-book-like house—set designer Barbara de Limburg has covered the walls of the constantly shifting rooms with phrases from the Perreault tale—is spent sleeping and dreaming, and, in fact, she has a hard time, as we may as well, in knowing whether her experiences are real or simply dreams.
It is certainly a dream of an opera, with the soaring phrases of beauty, suddenly transforming into more comic passages, and moving back again into glorious romanticism. One, moreover, cannot imagine a more remarkable cast: besides DiDonato, Blythe, and the long-performing Naouri, are the remarkable soprano Kathleen Kim (playing The Fairy Godmother) and another regular MET performer Alice Coote (who performs the “soprano de sentiment” role of Prince Charming). It may be true, as The New York Times reviewer Zachary Wolfe argues, that Coote's "voice is too blunt to expand over the score’s long lines,” but in the production I saw, she came off amazingly real in her trouser role as the unhappy prince who cannot find anyone in his kingdom to love. And when he does meet his love in the form of a surprise guest at the ball, Lucette in a stunningly beautiful sequined white gown which gradually cascades into darker colors at the bottom (all others are dressed in comically outrageous versions of red) she/he sings in quite beautiful awe about the event.
If this Massenet work is about the confusion of dream and reality—there are long periods when Lucette simply believes she has dreamed her entire visit to the ball and her later encounter with the Prince in the forest—this version, at least, is also all about hearing and language, the joy of being told the tale through words. Not only the walls, but chairs, tables, and the wonderful carriage on which Lucette rides to the ball are identified with their linguistic equivalents, the carriage itself made up of the letters spelling “carosse,” the old French word meaning “coach.”
Quite vindictively, it at first appears, The Fairy God Mother refuses to let the loving couple see one another in the forest, only allowing them to hear each other’s sad pleas. Yet that’s precisely the point. Hearing and reading reality is what truly matters here, not action and adventures. The only incredible actions in this work are Lucette’s flight from the ball at midnight, whereupon she loses her shoe, and the impossible attempts to find the foot that fits her glass slipper. Otherwise, Cendrillon is a work of poetical and musical wonderment, even to the point of having The Fairy Godmother save the day by riding in on a pile of gigantic books. And Pelly’s and De Limburg’s direction and sets put their faith on spectral elements, allowing the Perreault tale to come alive in a way that Verdi or even the later Puccini might never have been able to imagine.
The opera closes suddenly, since we already know the end, with the chorus announcing that their tale has come to an ending, the most lovely ending one might ever imagine, the char-woman in the Prince’s arms and even the terrible stepmother admitting—now that Lucette has found her own royalty—that she truly loves her. If we don’t believe her one little bit, it doesn’t matter. Cendrillon is a fairy-tale, as the host, Ailyn Pérez announced early on before the opera began, a much needed tonic these days.