Sebastian Galvez An Afternoon with Tennessee Williams, directed by Paul Sand / the performance Pablo and I saw was at the Robinson Gardens mansion in Beverly Hills on March 14, 2018

Yesterday, with Pablo, I visited the lovely mansion, Robinson Gardens in Beverly Hills, where Sebastian Galvez presented his one-man show “An Afternoon with Tennessee Williams,” directed by our mutual friend Paul Sand. The Spanish born Galvez looks amazingly like a thinner-faced and younger Williams, and managed a fairly convincing Southern accent, without overdoing it. Certainly, he is a far better version of Williams than the rather effeminate portrait in the Los Angeles Taper Forum’s production of The Glass Menagerie of a few years ago.
The gracious greetings and introductions of the Robinson head-of-staff who greeted the small audience of about 30 individuals from the entry room to the small library where the play was presented, was a near-perfect prelude to the rather suave and dapper Williams who Galvez portrayed.
Bringing out the hidden actor through a few knocks on a nearby door, Galvez centered his one-man play basically on Williams’ gay sexual relationships, which, although widely known, has been somewhat ignored. The actor describes his relationship, first, with Pancho Rodríguez y González with whom he traveled to Provincetown, there to finish his play, A Streetcar Named Desire, where he was also visited by the then-young actor, Marlon Brando, for a read through of what Williams had written—evidently so impressive that his agent and he both immediately agreed to cast him in the role of Stanley.

The jealous Poncho, however, stormed out and began a crisis in their relationship (although the playwright argued that he never had sex with his actors).
Although Gavez’s version—based evidently on Williams’ own memoirs—suggests that soon after in Provincetown, the playwright met his long-time lover, the Sicilian would-be actor, Frank Merlo, a recent biography of lyricist John Latouche suggests that Latouche had previously introduced Williams to that lyricist’s former lover (see my essay on Latouche in this volume). In any event, it is apparent in this production that Merlo was central to Williams’ most successful years (1948-1963), the lover serving, as well, as the playwright’s personal secretary, organizing his correspondence, finances, and much else besides peacefully enduring Williams’ storms of drunkenness, drug addition, and sexual straying. The two lived both in Manhattan and in a small home in Key West.
Galvez makes it evident, through numerous swigs of bourbon or Johnnie Walkers and even, at one point, a few stage-prop Seconals, that Merlo was the true of love of his lifetime, and when his lover was diagnosed with inoperable lung cancer, he returned after their breakup, to care for the dying man. Merlo’s death put Williams into a nearly catatonic state at a time his own career, primarily due to Williams’ shift to writing what can now be perceived as almost post-modern plays, was waning.
I love many of these late plays, and have published one of them, The Gnädiges Fraülein, in my and Mac Wellman’s anthology, From the Other Side of the Century: A New American Dram 1960-1965. But audiences simply didn’t take to them at the time, and the scathing reviews helped further to bring down a suffering and fearful-of-death Williams. 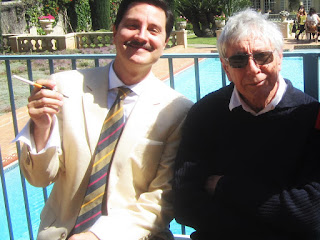 The one other major love of his life was his sister Rose, who, as it put it in the poem, “The Paper Lantern,” was always quicker than him in everything—until she fell in love and became, so it was diagnosed, schizophrenic. A failed lobotomy sentenced her to a life in a mental institution, and the love and sorrow the playwright feels about her is revealed not only in the character of Laura in his The Glass Menagerie, but through his life-long devotion to her, visiting her regularly in an upstate New York private institution for which he paid. The failures of his family life, Williams’ determined hatred of his own mother, and his own ghost and addictions—to gay, young lovers, alcohol and drugs—becomes a major theme in Galvez’s rendition of Williams’ life.
The actor even does a remarkable version of the playwright’s death, with a plastic bottle-top lodged in his mouth as he, attempting to apply eye-drops, collapsed and died in his suite in Hotel Elysée in New York at the age of 71.
One might long to hear more about Williams’ writing, which clearly was at the center of his survival. Yet Galvez’s and Sand’s “Afternoon” is a fascinating look at aspects of Tennessee Williams that are often overlooked. The small, but truly enthusiastic audience—many friends of either the actor or the director—felt, I believe, like they were sharing an afternoon with the ghost of a beloved playwright in his own living room.
I love all things Tennessee Williams, so this performance was a true pleasure, even if I might have wished for a little deeper view of the man who I think is definitely the greatest of US playwrights.
What I particularly loved about the author I have grown to know was his great sense of humor. It is rumored—and I believe it—that he laughed throughout the opening of A Streetcar Named Desire, as well he should have, Blanche being clearly a “hoot” out of a world few of us have ever known, but which is Williams’ special territory, a haunted, spooky, Southern past in which people never behaved as they might have been expected to. She, like Rose, was already moving toward insanity, even as she tried to escape.


Posted by greenintegerblog at 9:32 AM