“Taking a Chance on Love”

If the original 1940 musical, Cabin in the Sky, lasted only 156 performances at the Martin Beck on Broadway, some of it songs, by Vernon Duke and the brilliant lyricist John Latouche (about who I've also written) made musical history, particularly the musical’s early number, “Taking a Chance on Love,” sung so gloriously by Ethel Waters. 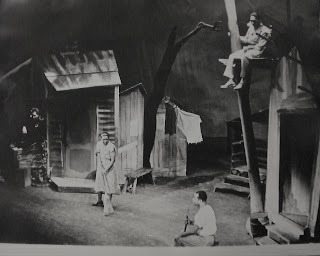 Even if no one had after to interpret it—and hundreds have—it might have been a standard classic of American musical theater. How can a song that is so very positive, singing of the new possibilities of love still resonate with the fears of all lovers, the possibilities of “slipping,” “falling” making a mistake which will eventually lead to heartbreak? Well, that was the gay lyricist’s Latrouche’s gift: he had certainly fallen in love again and again only to have been excluded, rejected, or simply disinterested in his love object. Lorenz Hart couldn’t have said it better. And it’s a sad song at the very moment when it celebrates new love.

I thought that cards were a frame-up
I never would try
But now, I'm taking the game up
And the ace of hearts is high

This song sings of failures in love not primarily about its success; yet we know how love feels when it comes out of blue, with “things mending,” and the possibility of getting “a grip.” It’s a lovely song of possibility at the same moment of it being a paen to years and years of failure. The “slip” says everything, the “chance” against one knowing it will certainly not be an easy thing to maintain.
Accordingly, hundreds of maimed or seemingly hurt lovers sang this song, among them Ella Fitzgerald, Frank Sinatra, Barbra Streisand, Rod Stewart, and Johnny Mathis. Strangely, the best interpreters didn’t bring so much luggage to the song, such as Helen Forrest, Ethel Waters, Tony Bennett, and the great jazz interpreters, Anita O’Day and Hallie Loren. Streisand, as she often does, slowed down the song so much that the lightness of the new possibility was completely lost. Fitzgerald sang it well, but it wasn’t her best since she clearly had had numerous loves, which is what her songs advertised. No, in my estimation, the breezy, light version of Ethel Waters is still the very best. She sings it, as was her wont, almost like a hymn, expressing her commitment to human emotions. And it’s lovely to hear her voice slide through the song as if it were a simple melody as opposed to a true symbol of the fears the song actually expresses. Latouche’s brilliant lyrics are one thing, but the interpretations are quite another thing. And Jo Stafford, in a full-voiced rendition, does it great justice.


Posted by greenintegerblog at 1:49 PM