Douglas Messerli | "Who Will Buy?" (from Lionel Bart's Oliver!) from My Favorite Musical Theater Songs

Since I had determined from the very beginning to include as many international musicals in English as possible, I felt there was no way leave out the great British musical by Lionel Bart, Oliver!, which premiered in England in 1960 and on Broadway in 1963. But I then faced the quandary of what song to choose.
There are many great songs in the musical, despite the fact that Bart did not even know how to write music. Perhaps the most charming song is “You’ve Got to Pick a Pocket or Two,” but I had already discussed that as a dance number in My Year 2000; “Where Is Love?” is beautiful, but it’s longing strains are those of a young boy, sung wistfully in the movie version by Mark Lester and in the original London production by Keith Hamshere, both whom are but a cypher of a character.
Davy Jones (later of the Monkees), who played the Artful Dodger in both the London and New York productions was quite marvelous in his signature number, “Consider Yourself,” as was Jack Wild in the movie version; yet that number always seems to me to be more of a large chorus anthem than a great musical song. And then, we cannot forget, there was the wonderful Georgia Brown plea for love, “As Long as He Needs Me”; but so is it also a very problematic song given that she is abused and ultimately killed by the man about whom she is singing. “Food, Glorious Food” is a vigorous beginning to a musical, but not a major theater song in my estimation, even as it is a glorious demand to escape starvation.
One of the very loveliest of the musical’s songs comes late in the work, when Oliver, now living (temporarily) with his legal and wealthy uncle is simply delighted by the sounds of selling outside the windows of the square where he now resides, and pleads, in his frail voice for someone to “buy him 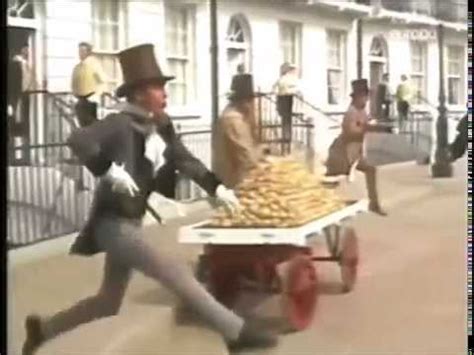 this beautiful morning.” That song is even more remarkable since it calls up another of musical's painfully beautiful, but absolutely terrifying pieces earlier in the work, “Boy for Sale,” sung in a great tenor operatic voice by Mr. Bumble (Harry Secombe in the film version).
Buying and selling is at the heart of both Dickens’ work and Bart’s musical version, each character, in turn, trying to bring others into the web of financial transactions in which the entire society seems to be involved. All the frail Oliver wants is the chance to enjoy a morning, and the glorious songs of the sellers and his pleas get mixed together in a joyful celebration of simple morning beauty.
Obviously, such a chorus-based song of buskers, led by a young singer was doomed not be reinterpreted. Only the original cast recordings of the musical and film contain it, and since I didn’t want to impose the full recordings upon the reader of this piece, I have listed above only the film version of that single, which truly answers Oliver’s question of “Where Is Love?”

Milkmaid:
Who will buy?

Oliver:
Who will buy this wonderful morning?
Such a sky you never did see!

Rose-seller:
Who will buy my sweet red roses?

Oliver:
Who will tie it up with a ribbon, and put it in a box for me?

Oliver:
So I could see it at my leisure,
Whenever things go wrong,
And I would keep it as a treasure,
To last my whole life long.

Posted by greenintegerblog at 10:31 AM