BODYTRAFFIC (founded by Lilian Barbeito and Tina Finkelman Berkett), performing at the Wallis Annenberg Center for the Performing Arts/Bram Goldsmith Theater / the performance I saw was on opening night, May 31, 2018

Over the past few years the Beverly Hills-located Wallis Annenberg Center for the Performing Arts has dedicated a large portion of their programming to dance, this year, particularly Los Angeles dance companies, which, along with the dance recitals of Santa Monica’s Broad Theatre, has helped the ever-increasing LA dance audiences to perceive the richness of modern dance in this city.
Last evening at the Wallis I watched one of the very best of Los Angeles companies, BodyTraffic, founded by Lillian Barbeito and Tina Finkelman Berkett, perform five fresh pieces, one of them “A Million Voices,” representing a world premiere (although it has been performed as excerpts elsewhere). Indeed, that work was one of the very best of this spirited company’s creations. 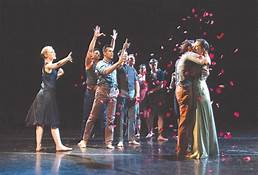 Set to music sung by the incomparable Peggy Lee, the piece was danced by Berkett, Lorrin Brubaker, Joseph Davis, Haley Heckethorn, Natalie Leibert, Jessica Liu, Guzmán Rosado, and Jamal White, who worked singularly, in duos, and trios to bring what choreographer Matthew Neenan has described as his intent to demonstrate how even in the most difficult times—yes, “If That’s All There Is,” with its haunting refrain of “Let’s keep dancing” was among the songs to which they danced—“life is worth enjoying.” It was clearly one of the most popular works of the evening.
If the creation was perhaps a bit too much of a collage, with the dancers coming and going with the shifts in songs, the energy with which they perform, convinces us of a kind coherence to the piece, helped on by a cheering audience, many of them obviously family of company members. Yet, BodyTraffic, having already won a great deal of national and international acclaim and awards hardly needs a local audience to declare the enjoyment they induce. Particularly in the first piece of the evening, Sidra Bell’s “Beyond the Edge of the Frame,” the company, costumed in various modes of fashion and sexually-charged outfits, moved in an out of the frame of the stage, again working primarily in pas de deux, and trios, demonstrating their amazing limberness, as they dance not only horizontal across the space but often move startlingly from standing positions to the floor, bending backwards and forwards, twisting, and rolling—often working in opposition to their more horizontally positioned partners. Lead dancer Joseph Davis, along with Jamal White, and Berkett particularly gave particularly powerful performances here. 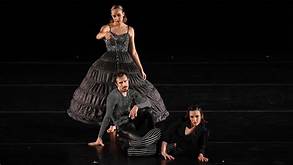 That work was followed by an excerpt from their popular “Fragile Dwellings,” choreographed by Belgian dancer Stijn Celis, dedicated to Los Angeles’ homeless population, and with music by Arvo Pãrt. The “dwellings” of this piece (designed by Erwin Redl) are represented simply by hanging strings of light, a bit like the neon-lit streets of our city, wherein dancers Davis, Leibert, Liu, and White dive, rise, twist, and turn and even writhe between the gradually lowering ribbons of light which by work’s end, like the individuals to whom this piece is dedicated, are finally “bedded,” draped across the stage floor, the dancers almost hedged in by the metal bar that has held the lit-up strips.
The first piece after the intermission, “George and Zalman,” a solo for the beautiful Berkett, choreographed by Ohad Naharin, with music, once again, by Pãrt, was my least favorite of the company’s works this time around. This “company premiere” used the writing of one of a popular writer, Charles Bukowski, who attempted throughout his life to be a kind of philosopher for the common man. Particularly in this case, where he warns the reader away from Beethoven, The Damnation of Faust, and, apparently any other elated “high” culture events, while arguing she fill her belly with beans, pay taxes, “fuck or, at least, copulate,” and drive a car. Clearly, this is meant to be ironic, reiterated by the fact that Berkett was swathed in a beautiful purple gown (designed by Eri Nakamura); but the work’s constant repetitions and its sometimes literal representations (for example, the belly full of beans was repeated each time by the dancer hitting her belly) that seemed to work against Berkett’s generally graceful and more sexually-oriented maneuvers.
During the pause after the piece, a well-dressed and quite intelligent woman sitting in front of me, suddenly turned, apparently somewhat irritatedly, to ask “now what did that all mean?” I could only laugh. Did I look to be a sage? Perhaps we should just say that it’s in the tradition of Harry Partch’s Barstow. 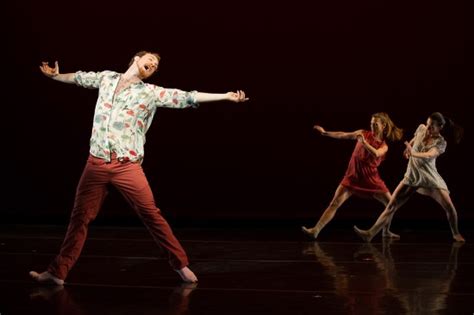 But if there was any doubt of the vibrancy of this young company, their much-admired Ode to Joy, “O2Joy” followed. This popular work, performed across the country, is a testimony to the American Song Book, with jazz music by Oscar Peterson, Count Basie, and great numbers by Jimmy McHugh and Dorothy Fields and numerous others. The ecstatic dancers Berkett, Davis, Leibert, Rosando, and White spun and leaped in grand jetes exuberantly, Davis lip-synching a totally camp yet charming rendition of Gerald Mark’s and Seymour Simon’s “All of Me.” It’s this sense of total joy, sexuality, and outright silliness that separates this company from so many others.
Rather embarrassingly, this was my first encounter with this magnificent BodyTraffic. But I’ll be back to see them the next time they appear.


Posted by greenintegerblog at 12:45 PM