In some respects, Thomas Bird’s Bearing Witness is a rather conventional monologue relating personal experiences of the author/actor. Yet Bird’s story of two generations of military experiences is so different and moving that it far surpasses most such works of its genre.
One might begin by pointing out that the two different wars in which father and son served were so radically different that they are barely comparable. Bird’s father, a medic serving in World War II, who, with others liberated the Mauthausen–Gusen concentration camp in Linz, Austria, a Holocaust institution described as one of the major of Nazi camps which killed from 122,766 to perhaps 320,000 individuals, including religious figures, Spaniards, Poles, Soviet prisoners of war, and even errant Boy Scouts, along with Jews, many of its inmates worked to death in the nearby granite quarries to help achieve Hitler’s and Albert Speer’s architectural imaginations. Bird’s father, in short, was a hero who saved many of those near death at the end of a War which—from American eyes at least—was a “good war,” a noble cause accomplished as Dan Rather wrote, by the “greatest generation.” The elder Bird returned home as an understated hero to continue is his good work as a doctor.
By contrast, Bird served in Viet Nam in B Company of the lst Calvary Division in 1965-1966, living through the experiences of a “dirty” war wherein families and individuals were killed in what sometimes might be described as borderline war crimes, several of which Bird painfully recreates in his performance. Although the younger Bird also received numerous awards (among them, the Combat Infantryman’s Badge, a Presidential Unit Citation, and the Vietnamese Cross of Gallantry with palm—none of which he mentions in his monologue) the actor returned to a country not at all sympathetic to that war’s soldiers, and who, like so many of his peers, suffered various versions of what might be described as Post-Traumatic Syndrome—including becoming alienated from his family and abusing several drugs. Close to his father’s death, the dying man admitted that he was sorry that he had “given up on him,” obviously also a shock to his now-recovering son.
Given the two pulls of this work—his loving memories of his father as a child and his admiration of him, and yet his own haunting memories of his personal war experiences, Bird creates a compelling narrative. And the swings between these two extremes—the author describes them as “circles”—make up the structure of this moving work. At one point, Bird reveals his own “large smile,” entering a Vietnamese Leper Colony to help protect the small, isolated gathering and speaking gently with a woman he describes as “one of the most beautiful women he had ever seen,” yet whose skin was peeling in layers; and at another instance he is commanded to kill an already dying Vietnamese soldier who still holds a grenade in his hand; at another moment he attacks a father simply attempting to protect his family.
But some of the most poignant moments of this monologue are when Bird visits Mauthausen to attempt to put his father’s great heroism into perspective. The curators and archivists caring for what remains of the prison welcome him warmly as the son of a liberator, but are a bit taken aback when he asks questions about deaths of some of the prisoners who had survived, but who died when the Americans and others had taken control of the camp. 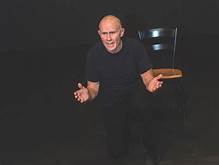 A day before his father’s death, the elder Bird admitted to his son that at least 13 survivors had died when he and others, trying to help revive them in their near-cadaverous conditions, fed them milk. Unfortunately, it was bad medicine. The shock to their systems killed them, the bodies simply unable to quickly consume such a rich diet. The director quietly meets with him, admitting evidently, the facts, but trying to reassure the curious son that it was unintentional and therefore not spoken about nor recorded. It is as if his own father’s “guilt” has been erased, while his 19th-year old sense of guilt will never be forgotten.
Bird achieves some sense of peace by simply visiting the small cemetery of those were not gassed in the prison showers. The voices seem to speak to him, and through him to us. Indeed, voices of the past might be another way to describe this work, the horrifying whispers of the so many who have died and continue to die in war.
The actor/author clearly found a personal revival in sharing his experiences through theater and opera while helping others to share their own nightmares. Bird is still clearly haunted by his and his father’s pasts, and suggests, perhaps, that we as citizens who lived through and even silently participated in these wars might as well be haunted by the ghosts of the millions destroyed. If nothing else, Bearing Witness is a testimony to those who died, with at one point, Bird angrily shouting at those who now deny the millions killed in The Holocaust, and by association those will still not admit to the numerous Vietnamese and Americans who died in a war of shame.

Posted by Douglas Messerli at 8:47 AM