coming and going
by Douglas Messerli

Stephen Sachs Arrival and Departure (based on David Lean’s Brief Encounter) / directed by Stephen Sachs at Los Angeles, The Fountain Theatre / the production I saw was the matinee on Sunday, July 15, 2018 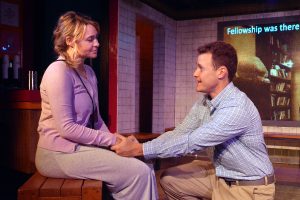 Anyone who has read my review of the Noel Coward / David Lean movie of 1945, Brief Encounter (in My Year 2012: Center’s Collapse) will know that am no fan of that melodrama about a young, rather unhappy British housewife who accidentally encounters a handsome and suave man (Trevor Howard), also married and with children, at a train station, which begins a series of “brief encounters” in which they increasingly begin to realize that they might have made the perfect couple as opposed to the flawed relationships in which they now live.
Coward and Lean finally wake up their dreaming characters, forcing them apart and back into the snug corners of their provincial isolationism. It is, in fact, the almost perfect work for these Trump years, as we are all asked to stop seeking anything out of the ordinary and to return to a time that never was.
Still, I like to be fair to things, particularly to such a much-loved film which has been adulated by most of the British public and admired in the US as well--where several variations of it, in film and on the stage, have recently occurred--and, accordingly, agreed to see this new production. 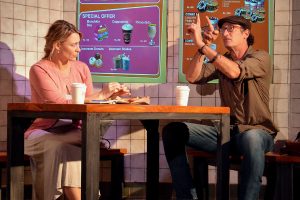 Fortunately, Stephen Sachs, working in careful tandem with the Deaf married couple, actors Deanne Bray and Troy Kotsur, using the Coward work as an vague outline, transforms the work into a completely American drama which includes a zealously religious husband, Doug (Brian Robert Burns); a racially-mixed romance between a Dunkin’ Donuts Pilipino shop girl, Mya (Jessica Jade Andres) and a handsome black policeman, Russell (Shon Fuller); a confused, cellphone-tapping teenager, Jule (in the production I saw performed by Aurelia Myers); and most importantly, two Deaf people who sign instead of speaking, although Emily apparently has the ability, with the use of special hearing devices to speak in English, the man she meets in the New York subway, Sam, who works as a American Sign Language instructor, only signs.
While Coward’s work on stage was titled Still Life, Sachs' version of this work is almost in constant motion, the various patrons of Mya’s donut stand are almost always on the move, marching with the play’s few cast members into patterned maneuvers to represent the busy streets of New York City; Emily’s and Sam’s encounters are presented in ASL as passionately expressed conversations with an ever-constant use of hands, arms, and eyes, and an emotionality that simply cannot be expressed in the simple home-bound conversations of Emily’s religious and hard-working husband.
In fact, Bray and Kotsur, emanate love from the first second they meet, falling naturally into a relationship that, in this case, cannot be unspoken, and is witnessed by all around them in their vibrant movements. Even though she is in her last weeks of Bible study, ready to be baptized into what is clearly a “born-again” sect, anyone with two eyes can see that this is a completely wrong decision. Sachs doesn’t even try to bother to gather a linguistic debate about the issue; having worked for 30 years with the now nationally famous Deaf West actors, beginning at the very theater in which I witnessed this play, the writer/director instinctually knows that these issues are better played out visually than voiced, even though a chorus of fellow commuters played by Adam Burch and Stasha Surdyke do translate the ASL gestures into language for those of us who, I might argue, are hard of seeing. 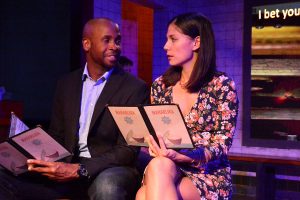 Sachs' work, accordingly, redeems the quiet repressions of Lean’s film by setting everything into the tumult of American life, with all its endless comings and goings, its constant sense of motion. The couple at its center fall increasingly in love in the midst of those greasy, sugar-coated tables serving donuts and coffee, not in a slightly steam-and-smoke filled cottage serving up English tea and other edibles. What was polite in the British version is here gritty, even somewhat violent, particularly when Emily dares to visit Sam on his own territory, in the classroom in which he appears to live. And even that visit terribly excites her, the halls filled with signing young men and women which reveal  the truth of her now repressed homelife of devotion and faith.
Emily, Sam, Jule (Julia) remind one of primary and secondary characters in Thornton Wilder’s Our Town, all figures who seek a world outside of their provincial lives, a play in which Kotsur starred in a major Pasadena Playhouse production.  Is it any wonder that this play’s Emily, after what she knows will be Sam's and her last meeting, is ready to throw herself into the subway tracks? The gentle Russell, the strange romanticist of this play, saves her, so that she might return home to a place she now must realize is not open to her own being. 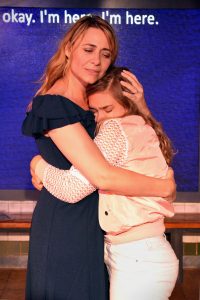 She returns for the sake of her daughter, Jule, who has just found out that she has been tricked by a girl pretending to be a young boy about whom she has fantasized and to whom she has poured out her love for on her Twitter or Facebook account. More than ever, this girl needs a strong mother who Emily has now become. But even Doug, who in fear of losing his wife forever had signed up for ASL training, now asks her to be his teacher, a loving act that, no matter how simple it may seem, cannot be ignored as a pleading for her to stay within the flock.
Yes, like the major character of Lean’s film, she does return to the fold, the small town provincialism she knows is wrong for her; but here, at least, she is no longer just a housewife. She has become a powerful mother and a teacher, perhaps now to even stand up against Doug’s religiosity in order to seek out another version of an American Dream, a dream that is always coming and going in American thought and, perhaps, maybe should even be laid to rest. Dreams are dreams, but life is living out who we are and who we have become.

Posted by greenintegerblog at 8:16 AM