The legendary Murray Mednick’s most recent play, Mayakovsky and Stalin, which I attended yesterday with my editor Pablo Capra, might be described as less a traditional drama than as a kind of “parade” of figures in the early decades of Stalin’s long and brutish rule of Russia. Indeed, except for brief interchanges between the dictator (Maury Sterling) and his wife, Nadya (Casey McKinnon) and between the poet Mayakovsky (Daniel Dorr) and his married lover, Lilya (Laura Liguori), the characters—aligned in chairs with red-colored seats along the back of the small theater stage—come forward one by one to speak out about their values and ideas. Rhetoric rather than dialogue dominates this work, as each attempts to explain in a series of short speeches who they are and why they are driven to act the way they do. 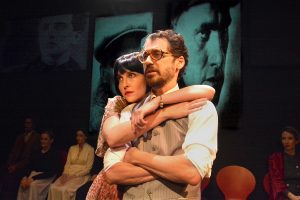 That is not to say there is no heart or emotional energy to the work. The great Soviet poet is impassioned with his homeland in Georgia, with language, and—to a certain extent—with the Communist Party and his love of Lilya, as well as his friendship with her complaisant husband, Osip (Andy Hirsch). And Mayakovsky, despite his belief in the party, is also doubtful of the ability of his fellow countrymen to make the necessary changes and, like everyone else, is quite terrified by Stalin and his henchman. After all, even though Mednick’s play does not represent this, Stalin would eventually kill and destroy almost all of the early believers in Communism who worked as writers, artists, dancers, and in theater (as Mayakovsky himself did). The poet’s cynicism, voiced several times in this work, is perhaps best expressed in a comic poem which I, myself, translated several years ago:

the tale of the little red hat

Once upon a time there was a Cadet*
a little Cadet who had a red hat.

But apart from that hat that capped
his head there was in him no shred of red.

tam. They all lived happily—
brother, father and Cadet granddad—

hat from his head and reveal his black
roots. The revolting red wolf got his licks

up to the heart. So please when you’re about to
start
politics don’t forget how that Cadet got et.

*Cadet was the nickname for the Constitutional Democrats, the part of the political center.

As Maykovsky notes in Mednick’s play, he likes to rhyme.
Stalin’s shuttered wife, Nadya, is represented by the playwright as a parallel version of Mayakovsky. An intelligent and sophisticated woman raised herself in a Communist family, Nadya might like better to live like the sexual open and more feminist-oriented Lilya Brik. But, of course, as the wife of the supreme leader, she is not allowed such choices; either she joins him in his social forays or lives only as a dedicated mother to his children, Vasiliy and Svetlana (the latter of whom later emigrated to the West). Closeted in a world of lace collected by Stalin’s first wife, who died under mysterious circumstances, Nadya increasing displays her dissatisfaction, not only with her personal life but with the various purges of individuals (doctors, artists, etc.) by her husband. She is aided by her trusted servant, Masha (Ann Colby Stocking), who is a true-believer in religion of the Orthodox school. But like Mayakovsky, she increasingly is given over to bouts of despair and disbelief.
And then, of course, there is Stalin, a crude and rude dictator who sees himself as the representative of history itself. Like all such leaders his entire life is given over the great “cause” he believes he represents. There must be someone at the top, he declares, to make sure the Party progresses and moves forward in its intended path—even though Mednick makes clear that that “path” is something that is constantly shifting under the feet of the would-be believers. Sound familiar? (At least our current leader has only a made a “killing,” to our knowledge, in the marketplace; although he has bragged that nobody would take him to account if he might gun someone down in the street). Fortunately, Mednick does not milk the slight similarities, and centers his work on the subject at hand. 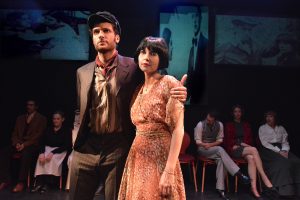 Serving as a kind of chorus and, one might argue, as a cabaret host to these harangues and interchanges is Max Faugno, a Russian Jew who was born years later in the US of figures who left the Soviet Union to escape Stalin’s endless wrath. Mednick, however, gives him wide range to speak in the present and the future, commenting on and connecting the “parade” of figures he puts before us.
Obviously in such a culture, the center cannot hold. Mayakovsky takes a gun to his heart in an apparent suicide in 1930—although some claimed that they heard two gunshots, and many suspected that it was Stalin’s thugs who oversaw his “suicide.”
In the 1932 Nadya took up the same kind of gun and shot herself in the heart as well, a self-admitted victim to her husband’s reign.
In short, these two very different figures suffered similarly through that period as brave and talented individuals whose very names were, at least temporarily wiped from history’s slate. After his wife’s death, Stalin never spoke her name; and only in 1988 did Mikhail Shatrov write in the Soviet press about what had happened, even though in the US several had commented on the truth long before.
Mayakovsky’s great poems and plays were banned until Lilya wrote Stalin (also, incidentally a Georgian by birth) asking him to redeem the poet’s career. Amazingly, he did, declaring him the only great poet of the revolution.
If Mednick’s work, accordingly, is somewhat static in the telling of this complex series of tales, it is centered upon matters of the heart, a work about people who had given their hearts to Communism, Stalinism, and their comrades, all of whom, in turn, broke those hearts before they were driven to explicitly demonstrate that in their desperate actions.
With projected photographs (some of them, such as Mayakovsky’s body after his death, quite amazing) and a wonderful cast, Mednick has taken history and brought it to life through the telling rather than the showing. How can you “show,” after all, such broken hearts? 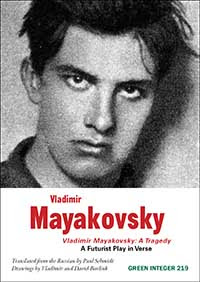 Besides the above translation I have had a larger connection with Vladimir Mayakovsky through a series of translations of his plays by Paul Schmidt. Pablo and I, just this year, published the most radical of those works, Vladimir Mayakovsky: A Tragedy, translated and designed according to the original by Guy Bennett, on my Green Integer press series.
I also published Murray Mednick’s play, Switchback, in my Sun & Moon Press books, and reprinted it in Mac Wellman’s and my anthology, From the Other Side of the Century II: A New American Drama 1960-1995 in 1998.
Posted by greenintegerblog at 8:53 AM