fear of sleeping
by Douglas Messerli

John O’Keefe All Night Long / directed (with scenic design) by Jan Munroe at Open Fist Theatre Company at the Atwater Village Theater / the performance I saw with Pablo Capra and Christina Carlos was opening night, September 14, 2018

Although I published John O’Keefe’s 1980 play, All Night Long, in the anthology From the Other Side of the Century II: A New American Drama, edited by Mac Wellman and me in 1998, I had never before seen a production of the play. Thankfully, Open Fist Theatre Company determined to present it at Atwater Village this season, and I immediately put it on my schedule. 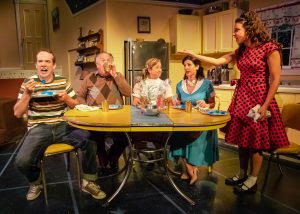 I don’t think it’s the kind of comedy/drama that one might describe through plot for those who have never seen it. First of all, the “plot,” such as it is, keeps shifting, events happen without explanation (for example, at one moment Eddy’s [John Patrick Daly] previously-loving family turn on him, sending him out into the night for the punk rockers to get him, yet he soon after reappears through an upstairs wall; the family’s eldest daughter, Tammy [Caroline Klidonas], seems to be sleeping with her father Jack [Philip William Brock], but at other times it all just seems to be a joke or even a game; although this family stays up, so it appears, the entire night, terrified to go to bed, hours go by in minutes and occasionally slip back in illogical reversals of time).
The publicist and director refer to this play as a “surreal” work. And, indeed, it does often remind one of Thornton Wilder’s surrealist American comedy, The Skin of Our Teeth, suggested by comments by Tracey Paleo, writing in a review.
Yet I might characterize it a bit differently, as a sort of absurdist mash-up of O’Neill’s Long Day’s Journey into Night with the 1950s television family-oriented The Donna Reed Show, along with elements of other such TV situation comedies as Father Knows Best and Leave It to Beaver. Costume designer Kharen Zeunert even hints at the standard pearl necklace worn by actress Barbara Billingsley with the mother Jill’s (Alina Phelan) outré necklace. Certainly Jill represents the implacableness of Donna Reed, Jane Wyatt, and Billingsley; nothing quite ever perturbs her sunny outlet of a kind ditsy housewife view of the world except when, challenged by her son, she claims all the contents of the house to be “hers,” declaring her son as not only having a voracious appetite (a bit like All in the Family’s “Meathead”)—throughout the plays he downs masses of bologna and ham, at one point even retrieved from the stage floor, a task that no actor might ever have imagined; the entire cast dines on blue jello!—and proclaiming:

You! You twerp! You don’t even have the stuffing to be a homosexual!
You pre-ejaculatory squirt! You’re the one that really fucked up my life! 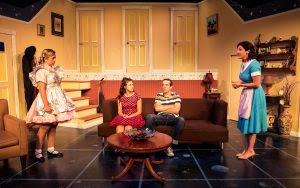 I haven’t even yet mentioned the existence of yet another daughter, Terry (Cat Davis), evidently a procreation from some alien medical procedure, (a “test tube daughter” born after Jack and Jill could no longer have children), which perhaps explains her preference for hiding out in a closet wherein she undergoes several monstrous transformations before she returns, dressed in slightly metallic-like toppings over her cutesy dresses. Despite her utter strangeness, Terry obviously is a thing of the future who may long outlast these battling dinosaurs.
Born in Waterloo, Iowa in 1940 (just 7 years before I was born in that same city, perhaps at the same hospital), O’Keefe lived throughout most of World War II, a jarring time for children, mostly in state juvenile homes since his mother had basically abandoned him, showing up, as he once told me, for brief periods that only complicated matters. In those days boys in such state institutions were often sent out to work, at various times, on local farms, the experience of which he recounts in his terrifying and also funny work, Reapers, in which the young state school laborer is treated to homoerotic like “startlements” by the farmer’s son. Is it any wonder that, growing up when and how he did, that O’Keefe’s view of family life is someone distorted?
Yet, for all that, in their pared down and often frantic pronouncements, father, mother, son, and daughters do make clear their fears, their values, and sometimes even their dreams in a not-so-acclimatable world. And by play’s end, they greet the new day with a kind of Beckett-like sense of “going on,” even if they feel that that can’t, the mother serving up her own body, symbolically, as their breakfast.
As a woman behind me suggested in the intermission, this all makes so much more sense in the context of where we are now in a society having to deal with Trump. I’d agree, but perhaps we should recall that the US has always been a strange and scary place, particularly in the post-War years in which O’Keefe was simply trying to survive as a child. The very pulls of the society of 1950s, between content affirmation of family and familial roles (I’ve long argued that women, despite their having to deal with the hubristic idea of male domination, were often really the forces of power in those years) and the horrible political terrors of the “Red” threat and all that might be associated with that, are well represented in O’Keefe’s powerful play, beautifully realized by the direction and scenic design, at the Atwater Village Theater, by Jan Munroe.
The acting, in all cases, is exceptional, and the company expresses in this revival of the San Francisco Magic Theater production the freshness of this 38-year-old play. O’Keefe himself, remains, perhaps a little more grizzled than when I last saw him, a powerful and intelligent figure who seems, at the moment to be making a kind of comeback, with another play, Don’t You Ever Call Me Anything But Mother appearing this fall at Zombie Joes Underground.

Posted by greenintegerblog at 9:18 AM