the mirror of truth
by Douglas Messerli

The last time I remember loving clowns was as a child when my father took me and my brother to the Ringling Brothers, Barnum and Bailey circus in the 1950s in Cedar Rapids, Iowa. There we saw the great Emmett Kelly and the famed circus clowns piling out of impossibly small cars and somersaulting over one another with absolute abandonment. 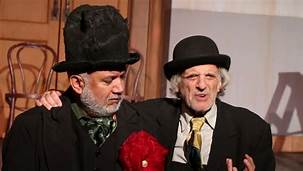 Since then clowns and mimes have been my least favorite of entertainers. So perhaps I was not the best critic to determine to review the play by Romanian playwright Matei Visniec’s production at Los Angeles’ Odyssey Theatre Ensemble. Yet I love Visniec’s major theatrical influences, Beckett, Ionesco, and Pinter—the playwright who now lives in France even did his own version of Beckett’s most famed play, Visniec’s titled The Last Godot—and I love film director Federico Fellini, whose movie The Clowns initiated the Romanian playwright’s Angajare de Clovn (Old Clown Wanted).
I also love the Odyssey theatre’s continual adventurousness and their strong commitment to foreign plays as well as to new American theater and revivals. Two of the actors in this play, Alan Abelew and Beth Hogan, also recently appeared in a production at the Odyssey of five short Beckett plays which I greatly enjoyed. So, I reasoned, perhaps I can simply overlook my aversion to “clowndom,” and take the play as the grand metaphor for life that it intends to be. Ignore the red noses (which are at one point were even tossed into the audience, along with candies), and just sit back and enjoy the fact that these old-timers have come to audition for what will apparently be their very last venue of their lives. Even old clowns, whose bones can hardly support an easy somersault—although the thin Abelew, playing Niccolo, does attempt a few—deserve some respect if, for nothing else, trying to endlessly convince us that they represent, in their ridiculous actions, a kind of mirror of truth.
These are poignant beings, Niccolo (who arrives to the audition door first), the heavier-set Filippo (the excellent José A. Garcia), and much later, the heavily burdened Peppino (Beth Hogan), are all old friends but now poised as competitors for the last phase of their lives, fighting and loving tooth by nail, kiss by reminiscence. 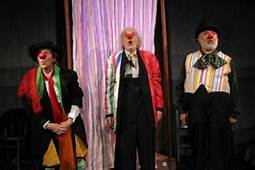 Unfortunately, in the long space of their own wait for “Godot”—the simple opening of the door by a producer who might offer one of them the opportunity of, as Beckett is fond of saying, “going on,” there isn’t much to do. And despite Visniec’s love of the great Irish-French playwright, he doesn’t have the linguistic chops to significantly explore their existential position. Their memories are thin, as they exaggerate, forget, and reenact their past lives and mutual involvements. Mostly, they compare their different circus companies and their daring dos. It’s certainly not very scintillating and at moments is rather boring—at least until Peppino shows up.
Throughout the early part, the two old males have, one by one, taken out their skimpy posters and reviews to compare their careers, as if pounding their chests to prove which of them was a better clown. But Peppino pulls out an entire theatrical flier, arguing, somewhat solipstically, that she was also an actress on the stage and, therefore, a far greater performer than a mere clown.
The issue is a fascinating one, particularly given the facts I’ve recounted above. Is acting a greater art than pratfalls and silent imitation? We never quite get the answer, since the proof of her talent lies in dying, the first time rather inexplicably but convincingly enough that the two males attempt to provide her some oxygen through Filippo’s “black box” of balloons.

When they give up, she quickly comes back to life claiming that her “silent act” is far superior to their buffoonery, since she has been more believable. When they react with slapsticks and rubber hammers, besieging her behind a slight curtain, it appears that they really have killed her, and they back off, distraught, terrified by their own violent behavior. This time, they briefly pray over and cover her body before escaping into the night—or, in this case, the afternoon.
Peppino, slowly rises, Chaplin-like cane in hand, to finally enter the suddenly open doorway to the audition studio, clearly the “winner”—if there might ever be one, of the oldest clown competition. And we perceive that her entry into that space also defines her death.
The moral, I presume, is that acting does best comic mimicry. Yet, isn’t that precisely what she has done, played dead, like the La Dame aux Camélias, surely not a sign of great talent, despite the tears it aroused in the eyes of hundreds of audience members in the late 19th-century.
In the end, this is a kind of sly play in its investigation of the differences between buffoonery, mimicry, and true acting. And along the way, there were a great many moments of simple fun. But I am not sure that I might define this as a profound theatrical event.

Posted by greenintegerblog at 9:35 AM