Douglas Messerli | "To the Hills" (on William DuBois's play Haiti)

TO THE HILLS
by Douglas Messerli

It’s difficult to believe that in the very same year, 1938, that saw the premiere of Thornton Wilder’s absolutely pared-down modernist, almost anti-theatrical play Our Town on Broadway, that William DuBois—a Columbia University graduate who later became an editor The New York Times Book Review, not the famed Black author and founder of the National Association for the Advancement of Colored People (NAACP) in 1909— had a play, Haiti,produced, as part of the Hallie Flannigan’s Federal Theatre Project (under the auspices of the Negro Theatre Unit) at the Lafayette Theatre in Harlem, a work at almost the opposite spectrum of theatrical emotional intensity.
If Wilder’s play is almost abstract in its barebones attitude, DuBois’ play hearkens back to the theater traditions of high melodrama and historical documentation that clearly lays out the moral ground of its figures. How can an audience not root for the Haitians, whose Creole citizens fought against British rule, and represented the first country in the Western Hemisphere to abolish slavery and the first free Black nation, not side with this country’s anti-colonialist heroes, Touissant L’Ouverture (Rodrick Jean-Charles) and his General Christophe (the dashing Max Lawrence) in their strategic retreat and later battles with Napoleon’s army, who has arrived via a frigate, complete with Napoleon’s sister, to “sway” the Haitians to return to the fold of obeisance to their rule. We know through history that these leaders too betrayed their ideals, but their early values are unforgettable.
The Haitian leaders of 1804, who now occupy the last of the large colonial estates, argue between themselves on how to protect their territory and government. The sly Touissant wants his soldiers to take to the hills—such an appropriate desire, given this production in the Geer family Theatricum Botanicum lies literally in the middle of the Topanga Canyon hills—to gradually wear-down their opponents, as opposed the more radical Christophe’s insistence that they begin the fight at the port where the French are about to arrive. 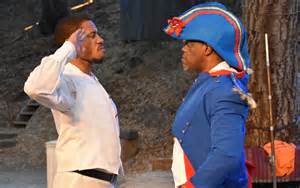 Yet Touissant knows better; the French will not be able to survive their mountain fights with the Haitians nor the climate, with its malarial mosquitoes, and the lack of protection from the island’s storms (all of which, of course, now reminds us of just how resourceful the Haitians, given the storms and earthquakes, despite the lack of organized US help, during they have managed, at very many times throughout history, their almost impossible survival). Indeed, the actors themselves literally do take “to the hills” before our very eyes, as the company uses, as in so many other Theatricum productions, the craggy landscape in which the theater sits. In this case, the hills are quite actually alive with Haitian revolutionaries.
When the French peevishly arrive at the former mansion, once owned by the family of the now royal consort, Odette (Tiffany Coty), along with unhappy General Leclerc (Mark Lewis) and his nearly always complaining wife, Pauline (Lea Madda), they discover no one around except for one seemingly obeisant servant, Jacqueline (the powerful Earnestine Phillips) who hides throughout most of this work behind a kind of stereotype of the Aunt Jemima-like maid, a woman who bows to her conquerors as if she were still the slave which she once was.
In fact, Jacqueline had an affair with the owner of the estate, birthing Odette, and has determined to stay on in this ridiculous position simply to care after her daughter, or, as she puts it, “rehear her lover’s voice.”
Although it might have been to the eyes of the 1930s US viewers terribly controversial to have an “octoroon” heroine (DuBois evidently kept his cast of blacks and whites from touching one another), in French culture such issues of miscegenation were often easily assimilated for French colonialists in Martinique, Haiti, and even New Orleans. For the French is was not so much a matter of skin-color, but a matter of class, of the proper education, and pedigree. Dozens of famed French writers, including Balzac, recount just such women and males, easily and sometimes not so easily, enfolded into high French society.
Odette, who if nothing else, knew that this was once her father’s estate, does not know the identity of her mother, and that becomes the central theme of this complex oedipally-centered work.
Moreover, despite her marriage to the nasty Colonel Boucher (Jeff Wiesen), she is in love with the young, newly named Captain Duval (Dane Oliver) (a title awarded because Boucher has sent him into the wilds to destroy the Haitians, a journey he has incredibly survived).
Gradually, the French forces lose too many soldiers to the native resistance, while the Colonel is slowly consumed by malaria. Christophe jumps in and out of the scene, at one point revealing Odette’s true paternity to the girl, the fact of which pulls her away from her beloved young hero, Duval. Discovered to be a spy, Jacqueline insists that her daughter escape with the others, that she return to the world that she, herself, has made possible for Odette to enter.
Yet perhaps it is too late, and as she is discovered as a spy and kills herself with a deadly potion, Odette is trapped in the world into which she was born, her lover murdered by the Haitian insurgents.
But not before a series of marvelous swordfights and battles that might have made Earl Flynn jealous. Never, on stage, have I seen a more convincing sword fight, with remarkable acrobatics, grand theatrical gestures, and heart-throbbing events. The mostly West Side Los Angeles audience, but this time, fortunately, joined by a large contingent of LA’s black community, reacted with boos, pleas of salvation, and, at times, open laughter, that I might never have imagined in contemporary theater. Suddenly I realized just how much had been lost in the rise of modernism over this kind of old-fashioned melodramatic writing, a theater that didn’t mind mixing up politics, love, fate, and just plain high-jinx.
In the end you could only laugh and cry and root for your favorite heroes. If a bit like Hamlet, a lot of those figures lay dead on the stage by play’s end, their resurrection for curtain-call was as uplifting as theater gets. And at the wonderful Theatricum (despite their need to get ready for the late-night performance of Arthur Miller’s The Crucible, a play with also has deep political roots, but with a kind of cold modernist objectivity that has always annoyed me), the actors all stand in front of the stage to greet and shake hands with the audience as it disperses. This is theater at its very best.
The director Ellen Geer has done something quite marvelous with her very large ensemble cast, children included, particularly given the fact that she determined to revive a play that should have never been lost.

Posted by Douglas Messerli at 10:33 AM