the past becomes the future
by Douglas Messerli

The Berlin-based Gob Squad, as they describe themselves, “a seven-headed monster”—consisting of Johanna Freiburg, Sean Patten, Sharon Smith, Berit Stumpf, Sarah Thom, Bastain Trost, and Simon Will—have been creating, over the past few years, major performances in, as they put it, “all continents except Antarctica,” and presenting “a schizophrenic…and multiple split personality: hermaphrodite, binational, and bilingual.” 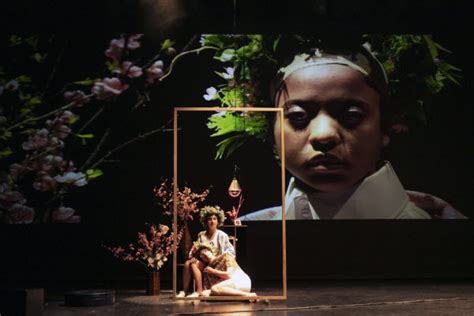 Their newest production Creation (Pictures for Dorian) hobbles together notions from Oscar Wilde’s The Picture of Dorian Gray—you recall, that novel in which Gray sells himself to the devil, so to speak, by allowing a hidden painting to represent his aging and morally corrupt life, while he himself remains endlessly young and handsome—with the actual lives of the performers invited to engage in this work: Mallory Fabian, Natasha Liu, Nic Prior, Dan Guerrero, Tina Preston, and Amentha Dymally, all of whom have had young and long-life careers in the Los Angeles scene.

Nic Prior, who evidently identifies—at least in one role he played, as he recounts—with a kind of transgender identity, serves as the young Dorian, perfectly willing to transform himself into a stage figure with whom we can all identify; he presents himself as a kind of shifting gay/female figure with whom the audience might find intriguing, and plays the central figure with the alluring ambiguousness of Wilde’s hero.
Fortunately, however, this is not a story of a hidden-away painting that reveals the major figure’s moral bad behavior, but, through the multi-generational actors’ recounts a true tale of the desire to engage with the spectator—we the audience. These are, after all, theatrical figures, bigger than life and smaller than life simultaneously, who want to engage us in their personal histories or, at least, the figures they perform as representations of their personal lives. Young and older, they are determined to face the audience (they turn away at various personal demands), despite their doubts and fears, to create the notion that Wilde proclaimed what art is all about: “It is the spectator, and not life, that art truly mirrors.”
Through the wonderful probings of the narrator, demanding dramatic endeavors and personal answers for their life-time behaviors, the actors in this work gradually reveal their relationships to theater, their favorite moments, their serious doubts, and their always intense desires to be front and center-on-stage for most of their lives. Each revelation is slightly devastating: a moment when the younger Preston studied with Jerzy Grotwoski (she has also performed in major works by contemporary playwrights whom I’ve published, including John O’Keefe, Maria Irene Fornes, John Steppling and Murray Mednick), Harlem-born Dymally recalling a moment with her co-actor in James Baldwin’s The Amen Corner, and, perhaps most touching of all, Dan Guerrero’s memory, at the age of 24, (as the play jokes, he is caught in the 1960s), of his appearing in a summer-stock production of The Fantasticks, where he was a bit unsure of his heterosexual relationship performance of the wonderful “Soon It’s Going to Rain.” He achieved it through taking out his co-actor to a park bench, perhaps explaining why he later turned to a career as an agent, only later to return to performing in ¡Gaytino!

These now somewhat elderly figures, at least in their bodies, may seem trapped in another time, consigned to their own performative eras, just as Dorian was in his locked-up painting, but yet they remain, so they proclaim, to hold their youth still within their souls. Indeed, the narrator defines some of them as the future, while describing the younger figures as the past.
Perhaps stage actors are more alive as they age than the younger figures desperately attempting to create their new images for the audience. Certainly, the beautiful Prior, the model-actress Liu, and the talented Fabian, are prettier for our eyes; but the elders live on, like Dorian, keeping their own beauty in their hearts and—yes—through their continual actions upon the stage, not only the theatrical one but upon the theater of life.
We all know that the past will be become the future, that the younger talents designated as something now gone will soon become the talents we want to see. But as Wilde demonstrates through Dorian Gray, they too will too quickly become something embalmed in their own talents. It’s sad; but surely that is the way of life, and it energizes this tragi-comedy to become a celebration of life.

Posted by Douglas Messerli at 12:41 PM