the sweet sound of dissonance
by Douglas Messerli

Beginning as a jazz pianist, composer, and arranger, John Beasley for the last few years has reimagined the great songs of pianist Thelonius Monk with, at first, a small combo, finally expanding that into a larger jazz orchestra, MONK’estra, which successfully demonstrates just how great of composer Monk truly was. Indeed, the two albums the group has recorded garnered several Grammy nominations.

For lovers of Monk’s often eccentric piano poundings and endless chordal embellishments, it may be hard to even imagine a big band sound—with a row of saxophonists (who double as clarinetists and flautists: Bob Sheppard, Tom Luer, Tommy Peterson, Adam Schroeder, and Danny Janklow), trombonists (Wendell Kelly, Ryan Dragon, Lemar Guillary), and trumpeters (Bijon Watson, Rashawn Ross, James Ford, Brian Swartz), along with percussionist Peter Erskine, bass and acoustic player Ben Shepherd, and Beasley, himself, sporting a Monk-like tam, at the piano and occasionally stalking the stage as the director—yet Beasley’s arrangements incorporate much of the punch and yet complex texture of Monk’s works.
The night’s list of songs at the The Broad Stage in Santa Monica, a performance which I attended with Pablo Capra, was announced from the stage, and since I standardly do not like to take notes at events and I don’t know Monk’s entire oeuvre, it’s difficult to recount all the titles. Yet I do recall Monk’s notable Round Midnight, Little Rootie Tootie, Going on the Hudson (one of my favorites), and possibly Dear Ruby. There were many others; in all, Monk wrote about 70 songs.
What is totally unforgettable is the sound of this group, as if the Duke Ellington orchestra had suddenly shifted into Monk’s extreme dissonance, which, as one group member argues, “he [Monk] makes sound normal.” 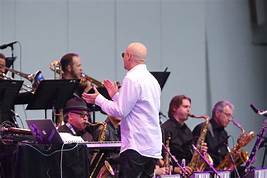 The utter talent of this group allows for a showcasing of the individuals, with a couple of baritone sax solos (particularly of interest to me, since I played that instrument in high school), a couple of trumpet and a trombone features, alto and tenor sex solos, and special focuses on the drummer and bassist, along with, of course, Beasley’s own very Monk-like piano renditions.
If at times there may seem to be a bit of sweetening-up of Monk’s more improvisatory approach, MONK’estra does capture the spirit of the jazz legend and reveals, moreover, as Beasley notes, how much of his work included elements of the history of 21st-century sound, including “hip-hop, bossa nova, Afro-Cuban jazz, funk, fusion and free jazz.”
The near sold-out performance was filled with people who couldn’t get enough of the highly energized sounds, awarding the performers two well-deserved standing ovations, and demanding an encore.
What I think we all recognized, despite the negative press Monk received throughout his life (jazz critic Philip Larkin once describing him as “the elephant on the keyboard”), as the arranger / pianist argues:

I discovered how pliable his music is, like any
great composer—for example Bach, who sounds
great in any tempo. Monk’s music is so open
to interpretation because his compositions have
such a solid story. I figured out how to elongate
his sophisticated melodies and voice things in a
non-traditional way. And through it all, those
unforgettable melodies just stick with you.

Even if the titles Beasley announced didn’t all stick with me, yet those melodies are still replaying in my head this morning, and the next time MONK’estra performs in town—they now travel the globe in their performances—I hope to be there.

Posted by greenintegerblog at 9:22 AM