A WORLD OF ENDLESS PICNICS
by Douglas Messerli

Maureen Huskey (writer and director) The Woman Who Went to Space as a Man, music by Yuval Ron / Los Angeles, Son of Semele Theater / the production I saw was on Sunday, October 28, 2018

You might describe the Son of Semele Ensemble’s small, hole-in-the-wall theater—which I attended for the first time yesterday afternoon—as being a haven for believers in drama the way many religious believers perceive their store-front churches. For this small company preaches “bold and imaginative theater” (what they describe as risk-taking work) that “embraces the friction between emotion and intellect.” In Greek myth Semele’s son, fathered by Zeus, was Dionysius.
Clearly, they have found just such a playful and risk-taking work in Maureen Huskey’s science-fiction musical, The Woman Who Went to Space as a Man. 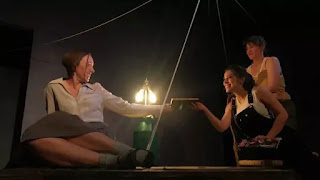 Posted by Douglas Messerli at 9:40 AM