DANCING DEEP MEMORIES OF THE PAST
by Douglas Messerli

The extravaganza, 7-hour (with intermissions and dinner buffet) production of Bill T. Jones/Arnie Zane Company’s vast Analogy Trilogy, which I witnessed last night at UCLA’s Royce Hall in Los Angeles, was very different from what I might have imagined it to be. Yes, this fairly young company—consisting of dancers Vinson Fraley, Jr., Barrington Hinds, Shane Larson, I-Ling Liu, Penda N’Diaye, Jenna Riegel, Christina Robson, Carlo Antonio Villanueva, and Huwang Zhang; as well as singers Matthew Gamble, composer Nick Hallett, and pianist Emily Manzo, along with numerous creative designers, lighting people, and numerous others, are all quite wonderful, with the dancers performing in often athletic groupings that work against the gender differences of the characters they are playing, but always brilliantly performing as they move in and out of each other’s theatrical space with great élan and theatrical presence.
Yet never having seen this popular company previously  I couldn’t quite have imagined just how much Jones and his former collaborator Zane—with whom Jones had a romantic relationship, and who died of AIDS in 1988—were more importantly “storytellers” and dancers fascinated by a wide range of music than the dance techniques which are, supposedly, at the center of their works. 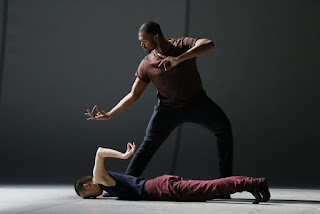 The three performances of this long work basically use microphones to relate the lives of three rather remarkable figures, Dora in Analogy/Dora: Tramantane, the story of a young Jewish woman, a rather fearless figure, coming out of Flemish Belgium in the early years of Nazi rule, and working with such groups as ORT, WIZO, and SIFO which helped in Vichy France and other regions to sneak out children—often replacing them with their elders (as Dora laments became something she could no longer stomach, the process of choosing some Jews to go to the camps while saving others of the organization’s choice)—so that they might escape to Switzerland and elsewhere. See my essay on just this process in My Year 2015.
Using large seemingly light-weight metal sculptural pieces, silver on one side and red on the other, the dancers moved in and out of spaces representing, apparently, the terrifying artifices, cold and friendlier, in order to survive. At one point, a Gestapo member, asking for Dora’s passport (a bilingual being, she has two varying passports, but determines to give up her German one, listing her as a Juden) she reveals that not all the Germans were monsters, the man reading the passport, after which simply closing it and returning it to her, freeing her, quite obviously, from transport to the execution camps.
Her less politicized sister, however, trying to survive the good live in Marseilles, does not survive, growing ill and unable to live through a world she did not quite comprehend. Yet Dora’s fierce actions come through, despite the many doubts she personally suffers, and she does survive, despite the death of her mother, her father, and sister’s deaths. Not all Jews, it is clear, allowed themselves to suffer the German occupation; some, for whatever reason, chose to fight, however painful, and survive, allowing many others to live.
Dora’s story, moreover, is made even richer by the introduction of the vibrant remberances of several others, some active in the underground movement and a few, such as her “distant cousin” Marcel Marceau, the famed mime, who was born to a Jewish family as Marcel Mangel, who is described as contributing to the escape of dozens of Jewish children. Part of the power of Jones’ storytelling is how it incorporates, as does his mentor in these works, novelist W. G. Sebald, upon the intense secret interrelationships between known and unknown historical figures. 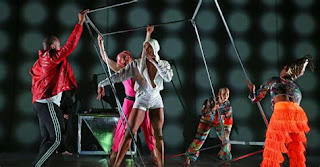 For me, the second of these works, Analogy/Lance: Pretty aka the Escape Artist, the tale of a young boy, who even as a child was so talented that the San Francisco Ballet offered to take him into their training. Yet as a very young boy, studying ballet, he became addicted to drugs, and nightly visited the gay areas of the Castro and more seedy city regions, picking up older men and threatening them with the revelation of their pederasty if they didn’t give him money and continue to pay him. He reports that he never did report them to their wives, their employers, and others, but survived by the threat, enjoying his own sense of a being more powerful than these abusive beings.
Yet his drug addictions, his continual jail sentences for drug possession, began to unravel his career. Even then Lance/Pretty, and the dozens of other names he had given himself through whom he survived, led him on to incredible careers, including a Broadway play, composing and singing gigs, a phenomenal drag queen identity in Paris (where he, as a black man evidently channeled Josephine Baker) made for a life larger than he might even imagined, wherein often he made phenomenal amounts of money.
He later fell in love with a straighter prisoner, Michael, back in jail, and was able to resurrect himself yet again in New York. Yet despite the apparent love and continued support from his “uncle,” a elderly man who describes as his “husband,” who himself appears to be trying to kick his drug habit, Pretty/Lance/LTB and the many other identities he as assumed, is gradually consumed by his habits, soon unable to walk and refusing to admit what his doctors are truly trying to tell him: that he is dying of AIDS.
Pretty, in his constant escapes from reality, will not admit to his own condition, yet gradually, with the help of his interlocker—the central focus of all of Jones’ dance dramas—he finally admits his “faith,” his belief that when you “cross to the other side,” it is alone and is based on the life you lived, not upon carriers taking you over. The dancers throughout create metal-rod-like constructions of what a room or home might temporarily look like, the same image being projected upon the screen behind them, referencing an imaginary world that “Pretty” never quite can reach.
It’s a kind of marvelous existentialist perception that finally redeems him and helps us to recognize that his thousands of mistakes have nonetheless make for a fascinating life. If he is beautiful, if everyone seemed to love and enjoy him; the problem was that he was still a flawed being, unable to live up to the dozens of amazing potentials he had imagined for himself.
Both the figures whom had been presented before our buffet were, in some senses, immigrants, individuals traveling through many spaces and societies in which they might never feel completely comfortable, and had, accordingly, been forced to assimilate new identitites. As Leonard Bernstein wrote about one of his major figures in his comic-opera Candide, “I am easily ‘assimilated.’” And that is precisely the case of Sebald’s character of Andros in his The Emigrant, a man who evidently fell in love with the great American aviator, Cosmo Solomon, who, himself falls ill and is institutionalized in a mental facility. Ambros assimilates by becoming a servant to Cosmo’s family, and when Cosmo’s wife dies, himself follows his friend into the same fate as Ambros, permitting and even allowing himself the terribly brutal electro-therapy gladly enforced by the brutal institutional director. That all of this, in turn, can be attributed itself to the effects of the Holocaust should surely come as no surprise.

I have to admit that I have always had problems with Sebald’s own sense of displacement (he too was a kind of emigrant, a German living in England for much of his life); but I find some his tropes about that sense of outsiderness too carefully constructed and even, at times, far too facile—despite the claims of many of his reader’s of his enormous perspicaciouscacity. Nonetheless this work surely does resonate with the other two dances that proceeded it.
Finally, I must also admit that, although anyone who knows me might perceive that I love story, I’m not sure it’s my favorite way of looking at dance. If these wonderful performers are truly good actors, set-movers, and, at times, exhilarating personalities, I want to see them simply move more often, to see their lovely bodies in motion rather than in carrying about sets and shifting in their undulating gender-free story-telling. When they gathered in the center of the stage or in intimate moments which reiterated the cubist-like tales they were relating, I was enchanted. Yet, I felt there needed to be more of those literal bodily encounters, moved away from the storytelling, as intense as it often felt, that Jones and his dramaturge had created.
There is no question about the profundity of Jones’ themes in this vast trilogy, and one can only admire his imaginative perspective. But I might have wanted to see it more through the movements of dance than through those more abstracted and literally-constructed microphoned voices. For my taste, the fragments Jones was seeking which were narratively based—were often rather literal—and might have been better served through the movements of bodies in space.

Los Angeles, November 4, 2018
Reprinted from USTheater, Opera, and Performance (November 2018).
Posted by greenintegerblog at 11:53 AM