somewhat off the road
by Douglas Messerli

John Fleck (writer and performer) Blacktop Highway: A Gothic Horror Screeplay’d on One Man’s Body / Odyssey Theatre Ensemble, directed by Randee Trabitz, with video by Heather Fipps / the performance I attended was on November 18, 2018

If you can imagine Charles Ludlum’s The Mystery of Irma Vep (with a cast of only one, not two) sprinkled heavily with doses of Alfred Hitchcock’s Psycho and elements of Tay Garnett’s endlessly campy The Postman Always Rings Twice, and with elements of even Frank Capra’s version of Arsenic and Old Lace, all narrated by an intelligent undergraduate college philosophy major, you might begin to contextualize performance/theater artist John Fleck’s Blacktop Highway: A Gothic Horror Screenplay’s on One Man’s Body, a work which originally premiered at Los Angeles’ REDCAT theater in 2015, and which I saw in revival on November 18 at the Odyssey Theater in west LA.

Of course this work, concerning twins, Jane and Frank—who as children vie for father’s attentions, Jane easily winning out since their father, a veterinarian/taxidermist, evidently is a heterosexual pederast, who invites is daughter into his room to “sing”—is filled with clever but clearly “naughty” sexual content that years ago got Fleck, along with several other performers and photographers, in trouble with the National Endowment for the Arts and several senators and congressmen (such as Senator Jesse Helms and Congressman Dana Rohrabacker for example). In this work, the twins apparently can’t keep their hands off one another, and when a child that looks like both of them is born, they quickly fricassee the fetus. I could see even the smart westsiders who attended this event flinch when Fleck described this scene. Good for them! This performer requires moral scruples in order for his art to mean. Horror can only be horror if it stands against our culture’s deepest values, which, of course, is the problem with certain senators, congressmen, and even presidents who cannot attend to that differentiation. 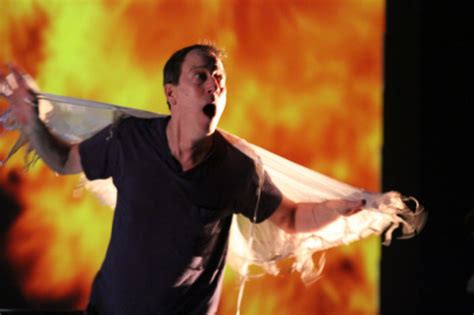 This House of Taxidermy (also described at its entrance as a School of Vocal Inflection), clearly, is a house of horrors, into which the Garfield-like character, William—“a very attractive man with a lush head of hair (and a secret),” who drives his sports car off of the blacktop highway into a ditch in the state of Maine, is as certain a victim as Marion Crane in Psycho (both of whom have apparently stolen a great deal of money). Certainly, Jane (now Old Jane) sees the young William with a vision of guilty lust similar to that of Anthony Perkins’ in his taxidermically decorated den just behind his motel’s front desk.

Since Frank (now Old Frank) is temporarily out of town, she invites the handsome William in; who soon perceives that the territory into which he has entered is close to The Island of Doctor Moreau (if you haven’t seen John Frankenheimer’s just awful 1996 version with Marlon Brando, rush to it before it disappears; the titles alone are worth the trip). Crows, crickets, parrots, pigs, even an orangutan (all of whom Fleck brilliantly imitates) inhabit this house, who, when for inexplicable reasons the entire citizenry, evacuated this Maine outpost, posted their animals on Jane and Frank’s front porch. Now in their second and third generations, the completive animals appear to be the major food source for the twins.
William, despite the cackles, snorts, imitative shouts, and hoots, seems to survive the night only to be destroyed by Jane for daring “to sing,” now outlawed—for quite obvious reasons—in the house she shares with Frank, killing her new occupant, whose corpse she quietly explains away when Frank returns from his voyage out.
As an attending owl might proclaim, this wonderful production is all a “hoot,” with the narrator and Fleck as the artist himself constantly interrupting to explain, for example, that in the terms of Roland Barthes we must question who is really speaking, since obviously it is all of one ventriloquist-like being (Fleck himself). As he notes in the script:

Paradoxically, this 'screen/play
writer' is also the ‘actor’ onstage
playing 'fictional' characters,
upon which you, the audience
receives and projects meaning as
it observes action through the lens
of a 'screen play's 'concomitant
'performance' of camera angles &
p.o.v. which provokes a question:
'Who' is watching 'who'?"

Later, the narrator/academic quotes theorist Jean Baudrillard who proclaims that the imitation (the “simulacrum”) has replaced the real, and that we can no longer determine which is real or not. Is this strange vision of horror actually the “real” vision of the author or is it played out in metaphors concerning his personal family situations?
Fortunately, even here Fleck plays the comedian, arguing that the word simulacrum itself sounds like a baby formula (again creating a wonderfully new metaphor, suggesting that Baudrillard’s idea is a kind childish formulation of ideas about imitation and truth), and admitting that “Honestly the only real reason that I’m doing this that it appears I’m too old to get a job in Hollywood, so I said “Fuck em’ I going to make my own movie and play all the parts.”
It is this constantly shifting perspective, with its different irrelevancies, that finally makes Fleck’s Blacktop Highway so amazing to watch. The voice (the vocal inflections suggested by Jane’s musical talents) of the performer works to actually define this theater piece, as if the final result were not so much a true dramatic presentation (thank heaven) than a series of poetic strategies to explore our own dreams and psychoses. It is the artist himself who is at the center of this work, representing a series of endless voices, human and animal, to explore identity. Beware of which voice you believe. All of them, even that of the chicken, shouting out “buck buck buck,”—which evidently William had a great many of in his mysterious briefcase—might turn you into a money-hunting desperado, as Old Jane becomes, seeking a new way out of your closed-off life in order to run away to Miami with her orangutan or “the pathetic beast.”
Just as in all those great dark Hollywood films, the police always arrive to collect the killers before they can truly escape.
If some might have thought that Fleck transcends the limits of proper moral values, I’d argue that his works reveal the true morality that our society often refuses to accept. I’ll embrace Fleck’s crazy vision of values any day, and hope in the last days of this production, everyone rushes to experience them as a good dose of reality in these days of delusion.

Posted by greenintegerblog at 11:40 AM