Don't carry the world upon your shoulder

For well you know that it's a fool

The noted playwright and performance artist Taylor Mac—who last year appeared in Los Angeles at the Ace Theatre in his delirious A 24-Decade History of Popular Music and more recently in a performance at UCLA--has now brought his play (previously performed at San Francisco’s Magic Theatre and in New York) to Los Angeles’ excellent Odyssey Theatre for the occasion of their 50th anniversary. 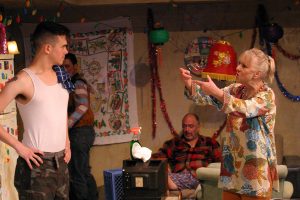 Mac (who prefers the sexual signification of judy) does not herself appear in this production, but clearly represents the playwright/performer’s sensibility. Yet, in this play, as director Bart DeLorenzo argues, begins in a small home kitchen that might almost be in Death of a Salesman or A Raisin in the Sun. Frankly, I disagree. This is neither a home set in New York area or in the Chicago black projects. Mac grew up in Stockton, and his set is quite precisely a suburban tract-houses of California, which truly does make a vast difference. And the play, about a returning dishonorably charged veteran, Isaac Connor (Zack Gearing), for doing cocaine, has little to do with the disenchanted children of either of those earlier plays. Isaac's job, one of worst one can possibly imagine, was piecing together body parts of blown-up soldiers in Afghanistan. Is it any wonder that he is not quite ready to come home into a world that has blown up all gender differences and created a total havoc of family life that he never before experienced? 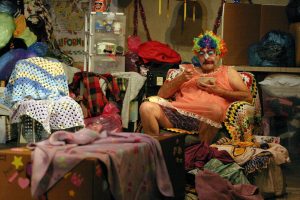 His formerly toxic masculine father Arnold (Ron Bottitta), while he has been away, has suffered a serious stroke, which has allowed his formerly abused wife, Paige (Cynthia Kania)—who has previously had to deal with her husband’s sexual philandering, particularly with her own hairdresser cutting away the wife’s hair to make her look as unappealing as she might, and with spousal rape—now aided by the fact that her previous daughter, Maxine, is now transitioning to the role of a male, Max (played by transgender actor Puppett).
This world is not of the modernist conception but is closer to a strange mash-up of Frank Gilroy’s 1964 tearful drama, The Subject Was Roses and Sam Shepard’s Buried Child—both plays about soldiers returning home to broken families—along with a heavy dash of British playwright Enda Walsh. No, Dorothy, we are no longer in mid-century modernist kitchen dramas.
The kitchen, including the entire house, has been totally thrown into chaos by Paige, who now refuses to do normal housework and who suddenly has been completely freed from any responsibility of housewifery duties. She, finally, has been able to humiliate her half-dead husband in the way he previously dominated her, forcing him to wear a frilly dress and clown-makeup, while she and Max take in cultivating trips of imagination to Europe and the world of museums, which she hopes, now that he has returned, in Isaac might join her and Max, as if traveling through a kind of new world of adventures like a sort of mix between the nanny worlds of Peter Pan and Mary Poppkins.
What she can’t comprehend is that her soldier boy has not transitioned into her new world, but still desires the normative patterns of the past, the clean piles of clothes she formerly spent years washing and ironing, the disinfected counter and table tops, a father who might even be able to demand his rights, despite his abuse of all.
Mac joyfully and quite humorously opposes the old world with the “new,” mocking both. The audience, mostly orderly West Side Angelenos surely appreciate the orderliness he recreates in his mother and “brother’s” absence after the first act, but also cannot help but celebrate the redemptive chaos Paige has now created as represented in Act I. 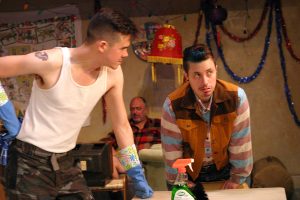 Yet, we also know that she and Max are truly headed for doom, having sold the house on a kind reverse mortgage (based on the death of the father) they will surely soon be totally homeless, living out their crazy dreams of total freedom on the streets.
In this play, however, it is the returning soldier Isaac who is sent out to live on the streets after he angrily and violently lashes out against what he perceives as the totally absurd actions of his mother and his clearly selfish new brother, who can talk only about “his” transition and his masturbatory love of men.
Each of these family members, as Mac has hinted, is a kind of Trumpian figure, who cannot allow anyone else to define what they believe to be the truth. In a world of hurt and pain there can be no subjective and agreed-upon reality. These family figures live each in a world of their own definitions. No one even has time, in this presentation of the family unit, to even clear up the piss fallen to the floor from the diapered father, who no longer can comprehend his family role or his previous sins.
There is no “right” here, all are trapped in worlds of their own making, without any way to rejoin what was previously, at least, a failed family unit. Present/past, order/chaos are terms of war against which any shared empathy has no chance in Hir (prounounced "here"), one of the pronouns that Max has chosen for “ze” self. Love has clearly lost in the process and each of these family members attempt to transition into a world they have not yet quite imagined might allow all of them to coexist.
If this play is often very funny, it’s also quite terrifying to me, after just seeing the 1945 drama An Inspector Calls, for just how similar the family breakdown in this contemporary drama is to that of the figures who led us to both World Wars. There is no right “hir,” only a terribly loneliness that will lead them all into a corner from which they may never escape.

Posted by greenintegerblog at 1:39 PM