Last night’s piano concert by Vicki Ray, quite simply, was one of the best concerts of contemporary piano music I have ever attended.
Ray, whose performances I have always admired, was at her very best, particularly in the first piece of the evening, “Sometimes I Feel Like My Time Ain’t Long” by Los Angeles composer Ben Phelps. The composer begins his work with a song sung with piano accompaniment from a wax cylinder recording that is part of the Library of Congress’ Alan Lomax Collection, a song recorded by Lomax in a Clemson, South Carolina house sung by Brady Walker, William Grant, Mary Lee, Thomas Trimmer, and Phil Butler. The simple gospel piece crackles and wavers in its tones on the recording, and Phelps uses those elements in his eight variations on that original tune to create an outstanding exploration of tonal variation. 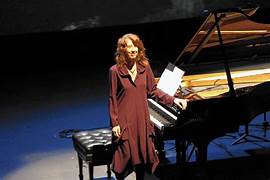 Gradually, as the work moves forward, the very complexities of this seemingly simple tune grow into more and more complex arpeggios, as we begin to realize through the piano’s variations of pitch that time is both limited and complex: what seems like the momentary becomes suspended in space, and the long musical intervals appear to be far-too-brief passages. It is a work that forces one to consider even the nature of music itself, as you settle in to the various variations of the tune. I could almost have listened to this dialogue between the original 1939 recording and the experimental “takes” on it for an entire evening. And I think the audience was stunned into silence when the work finally came to a close, since it might have almost spun out into an entire symphony for piano only. For me it was truly awe-inspiring, and I could not imagine how the concert might even continue after the intermission.
During the break I turned to my seated neighbors, who with my questions, reported that they’d traveled through the rainy night the long way from Ventura, having even become lost on their trip. Fred and Carolyn (I never got their last name) were friends, evidently, of the second composer, Daniel Lentz, who now lives in Santa Barbara, and to whom the couple introduced me after the performance.
Lentz’s work, “River of 1,000 Streams,” which presumably involved electronic intervention, was a bit like a contemporary version of the cascading refrains of Smetana’s The Moldau, but without that earlier work’s sentimentality. Here the repeating refrains were overlaid by the layers of electronic tremolos in a way that did not so much imitate the water’s flow as it moved through the countryside, but, through Ray’s virtuosic playing resonated throughout the Redcat theater, almost matching the rare Los Angeles downpour outside.
If the earlier piece was a kind of echo and variation, this work, although I might argue it is somewhat similar in structure, builds its chords from the bass to the high soprano keys of the piano, roiling up another kind of “stream” from the bowels of the instrument into its final piercingly high screams. Once again, Ray was a significant on-stage force, someone from whom hardly anyone might wish to remove their eyes.
Of less interest, accordingly, were Carole Kim’s visual contributions—a screen behind the piano and a kind of multi-colored wall to the left of the piano, at the right side of the stage to the audience. Kim’s black-and-white and sometimes colored prism-like images combining crystalline-like structures with undulating amoebic-like figures were quite often fascinating, but seemed, at least to me, to have little relationship to the compositions.
Spotting Ray’s companion, Tom Frick, in the lobby, I greeted him and was delighted to be introduced to the pianist’s justifiably proud mother.

Posted by greenintegerblog at 9:44 AM