Douglas Messerli | "The Smell of the Rose" (on Sebastian Hernandez's Hypanthium)

the smell of the rose
by Douglas Messerli

Choreographer Sebastian Hernandez’s work Hypanthium (the word refers the heart of the rose which contains the nectar) primarily represents a kind of sexual ménage à trois between three individuals whom she describes as “gender non-conforming people, femmes, trans people and women who continue to express who they truly are regardless of patriarchy’s prevalence and constant policing of our bodies.” And, in this sense, sexuality becomes fluidity in this dance as the three major figures (Hernandez and dancers Angel Acuña and Autumn Randolph circle around one another, at times appearing almost in the kind of arm to arm, head to head patterns of Stravinsky’s The Rite of Spring.) 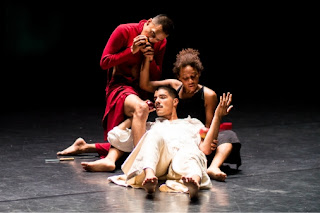 This work does not embrace the standard rituals—although there are quite funny rifts of those rituals, including early on an invocation to the local god of music/performative reviewers from the Los Angeles Times, Mark Swed—these dancers are all transgressors of normative behavior, interlinking in deep sexual swoons, breaking apart and returning to one another again and again in a series sexual interlinkings, diving in and out and between their kisses, their crotches, and constant embraces with often quite acrobatic somersaults and rather impassioned headstands.
The enthusiastic audience who filled the theater at REDCAT at the opening night performance openly cheered on their various voguing-like positions and their constant cross-overs of relationship.
Inevitably, there are temporary breakups, a movement away of each from the other with a sense of consumerism signified by their purses. Yet, it’s all in good humor, as we soon discover that, like the water filled chandelier (designed by Hernandez) that hangs over their heads, their purses (by Maria Maea are not filled with dollars but with water itself, later leaking down from hook from they hang them. The outlandish rocking chairs (designed by Rafa Esparza) may temporarily separate them, but their pouting movements upon the wooden artifacts soon betray their dissatisfaction with the positions, as they quickly move them aside to position their bodies into far more intimate interactions on the stage floor with green-and-yellow lit environments which weave them back into their intentional transference from a single or doublings into a kind of unholy trinity which, despite all of the cultural difficulties of their world, cannot be contained.
The entire dances of Hypanthium are about fluidity, as the three dancers, dressed in red, black, and white, move in and out of, not only one another, but of identity. If you need to ask about the sexual identities of these figures—and I must admit, at moments, I did—then you are missing the point. These three are one, a large expression of simple sexuality that doesn’t fit into normative systems. Even the psychological injections of the lack of personal recognition do not work in this world. No scolding needed. These three are one. A rose, behind it Bette Midler’s rendition in her performance of Janis Joplin of “The Rose,” from whence the nectar, “hypanthium” comes:

If Midler’s song in perhaps to sentimental for the hard-edge songs to which these dancers perform, it is, ultimately, a viewpoint that resonates with Hernandez’s vision.

At the end of the performance, my guest for the evening, Pablo Capra, suggested that he felt nervous about several of Hernandez’s moves, particularly in the early film sequence, where the dancer struts down in deep drag tresses and in high heels in the midst of traffic on one of the major bridges that lead to East Los Angles, even reclining momentarily on the parapet looking over the railroad tracks. Later in the performance, on the slick REDCAT stage, the dancer again takes to his high heels, slinking across the stage in what appears like clear danger.

The fact is that Hernandez and his small company take so many chances in their dancing, you cannot, as the enthusiastic audience reinforced, but adore their commitment to love, of whatever kind it may be.

Posted by greenintegerblog at 11:14 AM