Ludovic Halévy and Henri Meilhac (libretto, based on the novella by Prosper Mérimée), Georges Bizet Carmen / Howard and I attended the Met live-HD film production on Saturday, February 2, 2019

Over numerous years I have come to know almost every aria in and the plot of Carmen, but oddly enough I had never seen a performance of the popular opera. So, the announcement by the Metropolitan Opera that this year they were including their tragic tale of the gypsy Carmen and the soldier Don José in their live HD broadcast, led Howard and me to buy tickets. And this production was such an excellent one, that feel that perhaps I need not see another.
I say that, knowing that I might truly enjoy hearing Georges Bizet’s most memorable score, and would truly enjoy singers performing it of the quality of this production, but must also proclaim that the central characters are all rather repulsive.

Yes, Carmen (Clémentine Margaine in this production) is a truly independent spirit, who will have love only on her terms, as she expresses it in her Act 1 "Habanera.” If in a society where men generally made the decision about whom they loved, the cigarette girl, given her beauty, is able to make her own choices of lovers and to declare that her shifting interests may result in heart-break or even death for her former lovers. In short, she recognizes herself as a dangerous siren who spends a great deal of energy in playing a kind of dominating whore, spinning webs around men only to leave them entrapped when she moves on to her next lover. And all those around her, apparently, know her pattern and steer clear of her sexual enticements. Only outsiders such as Don José (Roberto Alagna) and the toreador, Escamillo (Alexander Vinogradov) might allow themselves to fall for her charms.

It is precisely her independence and willfulness that attracts men to her. In a society of feminine passivity, Carmen stands out in her alluring masculine-like stance. One might even observe that she symbolically stands for soldiers and toreadors alike—both groups of which, because of their historical association with their own sex and their colorful costumes, have long been the focus of gay intrigue—as a kind of acceptable drag incarnation of their male colleagues. *
But Carmen also is a betrayer, a violent fighter, a smuggler, and thief, who entices the flustered Don José not only to leave the saintly—and again quite passive female, who visits her would-be lover only upon instructions and the pleas of Don José’s mother, Micaéla (Aleksandra Kurzak, in real life the wife of Alagna) free her from arrestment, for which he is imprisoned for months, to leave his employment as a soldier, and to join the gypsy smugglers. True, he is intoxicated by his love for Carmen, but we also see through these acts just how weak he is as a man. In a sense, Don José is as passive as Carmen is independent. And he too has now betrayed all those to whom he was formerly committed. Is it any wonder that Carmen can no longer admire or love him? By giving in to all of her demands he has simply shown himself as a male weakling (and we must remember that Mérimée’s tale is very much about gender stereotypes, even if they are often overturned). 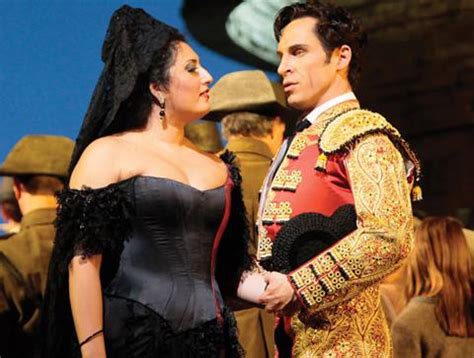 Carmen has now fallen in love with an equally odious being, the self-enchanted, braggadocios bull-fighter from Seville, Escamillo. The children (which are absolutely wonderful in this production, which provided them even with a backstage interview in the intermission) and the locals may all celebrate his achievements, but there is something amiss with this “hero.” Escamillo may appear brave to attempt to visit the smuggler’s mountain hangout to seek out Carmen, but he is quickly bested in a fight with Carmen’s cohorts and backs off.
Even if Carmen is currently smitten by him, we recognize that she will eventually perceive his true cowardice and will leave him as well. Fortunately, we never discover what might have occurred in their relationship, but it might be interesting as a separate work to imagine what their relationship would have been and how it might have ended—surely, once more, in violence.
The true hero of this opera is Micaéla, who truly enters the lion’s den of the smuggler’s hideout, trembling with fear, not only for her encounter with the suspicious males, but for having to encounter her nemesis Carmen. Yet only she is able, temporarily at least, of weaning Don José away from this world so that he might attend to his mother’s impending death.

Her victory, however, is a short one. He returns to Carmen, this time taking on the most horrific role he might ever embody of a murderer, waiting to be arrested and hung.
No matter how you might view conventional behavior, you have to be shocked by the trio of horrific beings at the center of this story. Opera is filled with hateful figures, criminals, rapists, and many, many murderers. But these three rather shady figures starring in a single work may be a kind of record.
They all may be proclaiming love, but the results of that love make you shudder. Even Don Giovanni, the lecherous count also roaming the Seville streets, seems almost saintly in comparison.
As the gentle and mostly unjudgmental Howard said, upon leaving the theater, “these are not such nice people.”
I was enchanted by the performances and music, even if it didn’t make me want to abandon my life and run into the mountains.

*It’s fascinating, simply as a coincidental piece of gay gossip, that Marcel Proust, after Bizet’s death, befriended the composer’s wife and son, upon who based two of the central figures in his masterpiece, Remembrance of Things Past. The author of the original Carmen, Prosper Mérimée, although having occasional affairs and long correspondenceswith women, never married and lived most of his life with his mother. He did have a one-night stand, apparently, with George Sand (not impressed with his sexual prowess), who might almost be portrayed as a kind of Carmen, a strong-willed, talented seductress of many powerful men.

Posted by greenintegerblog at 10:37 AM