the music of our own ears
by Douglas Messerli

Ever Present Orchestra with Alvin Lucier, at REDCAT (the Roy and Edna Disney / CalArts Theater / March 26, 2019, I saw the performance with Marjorie Perloff

Born in 1931, Alvin Lucier was one of the central composers (along with Robert Ashley, Gordon Mumma, and David Behrman) of what was called the Sonic Arts Union, comprising works that dealt with acoustical properties of music and highly structured compositions which are manipulated through computers and the relation of acoustical variances of the instruments involved, which, in last night’s REDCAT concert, consisted of electronic guitars, glockenspiel, saxophones, violins, and piano.
Lucier’s work requires a closely knit gathering of musicians, each of whom must work in tandem and simultaneously to echo and reverberate the sounds of the others, or, in the case of the first work of the evening, Ricochet Lady (2016), where player Trevor Saint (for whom the piece was written) works with the ricocheting sounds of the wall against which the instrument is placed.
The group, the Ever Present Orchestra, founded by Bernhard Rietbrock in 2017 (and consisting of Oren Ambarchi, Jan Thoben, Trevor Saint, Charles Ng, Valentine Michaud, Joan Oliver Arcos, Vera Weber, Christina Moser, Beatrice Harmon, Kris Rahamad, and Rebekka Thies), brilliantly brings to life a tonal tonic. 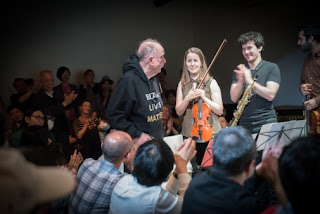 To listen to Lucier’s music one must have patience and an ear for subtle shifts of harmonics created by the other players. For this composer no sound is pure; it lives in an environment of rooms, other players, and distortions of air, artificial machines, and our own eardrums. Somewhat like Cage—yet using almost the opposite tactics of Cage’s renowned “silence”—this composer reveals how the listener has a major role in creating the music—no matter how precisely performed—is perceived. Even a cough, a yawn, or an exiting audience member alternates what we hear. Fortunately, the mostly young and enthusiastic crowd in the filled theater sat raptly, clearly enthusiastic to hear the orchestra’s West Coast premiere.
While Saint’s glockenspiel playing as surely an early crowd-pleaser, repeating 3 and 4 note chromatic changes along with the wall’s reverberations, my favorite piece of the evening was the third piece, Two Circles from 2012, wherein four electronic guitars span a range of 18 ascending and descending semi-tones, creating, as the program notes suggest, “audible beating at speeds determined by the closeness of the players’ tones and those of the sweeping waves.” The beats occur when the instruments differ slightly in their harmonics, and the waves are produced by unison passages which, alternating, create the title’s “two circles,” almost as if recreating a slightly oppositional and communal antiphon, the music pulling at moments apart to then return to modulate once more.
In many respects Two Circles is related to the other two works presented here: Braid from the same year, and the more recent Semicircle (2017). In the first, the interchanges occur between the electric guitars whose tones rise and fall in a four-strand pattern, what musicians describe as a “braid.” But as in Two Circles a tension (a harmonic and rhythmic beat) arises through the introduction of three wind instruments. Once again, the further apart of the musical score, the greater the “beating,” which playing in unison quickly resolves.
Written for this very orchestra, Semicircle, in which 12 musicians play up and down the harmonic register, presents what the composer describes as “sweeps” in unison. It is only the pianist who at one-second intervals, reveals these or, perhaps, “tracks” them by reminding us sonically of the tensions or “beats.” Perhaps it was the near unanimity of this piece, which shifts Lucier’s composition into the realm, almost, of a tone poem, that led me to feel less generous about this work.
But, obviously, Lucier’s work is a cerebral experience, a great demand for a somewhat elderly man late at night.
The last, one of his most famous works makes that cerebral requirement quite clear. Lucier himself performed his 1969 work, after the intermission, I Am Sitting in a Room. In this famed piece the composer speaks into a tape recorder, simply explaining his process and intentions:

I am sitting in a room different from the one you are
in now. I am recording the sound of my speaking voice
and I am going to play it back into the room again and
again until the resonant frequencies of the room
reinforce themselves so that any semblance of my
speech, with perhaps the exception of rhythm, is
destroyed. What you will hear, then, are the natural
resonant frequencies of the room articulated by speech.
I regard this activity not so much as a demonstration
of the physical fact, but more as a way to smooth
(here the composer stutters the first letters
of smooth, s-s-s-s) out irregularities my speech
might have.

Apparently Lucier sometimes stutters in his everyday life. But the lesson of this rather amazing work, once again, is how sound travels, and how we perceive it, particularly, as in the old telephone trick of information passed from one to another and another and another, when repeated again and again. By the end of this work, quite obviously, the message has been lost, the network that we all rely upon for comprehension broken simply through the process of our abilities to hear and assimilate it. Inflections, rhythms are we have left to make sense of the message.
The simple statements spoken into a tape recorder before us become near gibberish, and we are left with the fact that meaning is simply transitory. A story told to us by a friend will never be the same story we tell to another friend or what that friend tells to another, and so on. Sound is immediate; but of course it never truly is that either.