the square and the tower
by Douglas Messerli

Another of what I have expressed as my endless coincidences occurred last night while attending the Cuban Dance Company’s performance at the Willis Annenberg Center for the Performing Arts. The first piece of their wonderful concert was a remarkable version of Merce Cunningham’s Fielding Sixes, viewed just a few days shy of that dancer/choreographer’s 100 birthday.
I’d met some of his former company members, Paul Taylor and Karole Armitage (with whom Howard and I once shared dinner with David Salle), and I knew Cunningham’s lover John Cage. Taylor, in fact, was immediately responsible for my studying for about a year with the Joffrey Dance Company in New York, an experience which I loved. Inexplicably, I’d never been able to actually see any of Cunningham’s dances.
Fortunately, that was righted last night at the performance, with a reduction of 7 minutes of the 1980, 28-minute performance, with music from Cage’s original Improvisation IV, and with new costumes by David Quinn and different lighting by Manuel Da Silva.
The original was described by dance critic Anna Kisselgof:

The first thing that strikes the eye in Merce Cunningham's
new ''Fielding Sixes,'' which had its New York premiere
Thursday night at City Center, is Monika Fulleman's fetching
backcloth.
Charles Atlas's initial beige-lavender lighting draws
attention to a purple treelike shape, and this method of
painterly blotch is duplicated in a green form implying a
flower or a toadstool, while a burst of red erupts at the far
right. Three burlap hangings complete the picture.
The same free finger-painting atmosphere is reflected
in the activities of the dancers, who start out as a duo, turn
into a trio and then into a quartet. This human paint drips
all over the spatial canvas that Mr. Cunningham knows,
better than anyone, how to fill with a painter's eye.
In all there are 14 dancers, and Miss Fullemann's costumes
reflect the colors of her set. The men are in shiny purple tights,
some with white tops. The women are in light green,
wearing shorts over tights. This color-coordination would
seem a violation of Mr. Cunningham's method of isolating
the decor from the choreography and sound during the
composition of his work.

The Malpaso Dance Company’s performance was cut down to 11 minutes (with permission from the Cunningham Foundation), staged by Jamie Scott with costumes—in the case the women sheathed in steely light blue body suites and the males swathed in dark red—by David Quinn. In this version the backdrop was draped entirely in black, which made the lighting by Manuel Da Silva all the more important as it put the entire focus on the dancers (Dunia Acosta, Maria Karla Araujo, Daileidys Carrazana, Osnel Delgado, Beatriz Garcia, Armondo Gomez, Abel Rojo, and Lisbeh Saad) themselves. 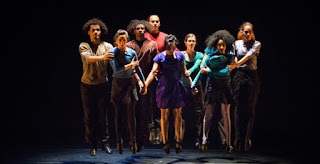 As in the original, the major movements of this piece consisted of high-raised leg extensions along with a spectrum of other movements including lifts and back kicks. Rereading the original (1981) review, it appears that this new production centered far more on uniform patterns than the one danced by Armitage and others. But that, in turn, gave the dance an even greater breathtaking quality, as coming together in units and twos, threes, and other formations, the dancers appeared to be participating in various communal gatherings, paring off only to rejoin larger groups, and stressing the oppositional demands of the personal and those of the larger community.
The second piece of the evening, Oscaso (2013), choreographed by Osnel Delgado, consisted of a simple duo dancing to the music of three musical scores (Parallel Suns by Autechre, the 2nd track of Kronos Quartet of White Man Sleeps, and Sunlight by Max Richter). The costumes were by Osnel Delgado, one of the dancers as well. Here the male figure, dressed in red pants and a flowered shirt, makes a remarkable contrast with the female dressed only in a loose black miniskirt and dancer’s top.
Here the dancers twist and turn around and through each other’s arms, often in somewhat awkward gestures that suggest both sexual love, alternated by escape and embracement, recreating a sense of the natural conflicts that embody any relationship. There are also, as in several of the pieces of the evening, moments of comic delight, as the woman drags the male across the floor in evident, if only momentary, dominance.
Being (Ser) (2018), choreographed by Beatriz Garcia, was one of the strongest dances of the evening. With lighting again by Manual De Silva and the costume design by the choreographer, the dance (translated in English as “to be”) is similar, in parts, to the Delgado piece. With music by the Italian composer Ezio Bosso, however, this is a far more programmatic work, centered around, as dance critic Jerry Hochman described it, the building blocks of being: “independence, conflict, and resolution.”
A bit like the earlier Cunningham piece, the first of the three movements, begins with tandem movements, which expresses the performer’s simple joyfulness for being individuals who still work within a kind of ménage à trois, who gradually breaking away, move into angry conflicts with each other, particularly regarding their heads, as they fight not only for control over one another but for intellectual dominance, while still regretting their actions.
In the final movement the dancers come together, almost fearing to lose touch with one another as they come to realize their dependence upon their societal sharing for their very survival, including working against their sometimes violent instincts. The resolution is a beautiful dance sequence that redeems the pushes and pulls of the past two movements.
The final piece of the evening was Ohad Naharin’s 1996 large group dance, Tabula Rasa, where once more the larger society challenges the individual relationships. The dancers all seem to be dressed in this number as if they were joining one another on the beach, with denim cut-offs, florid blouses and shirts, etc.
But even if they might be perceived as celebrating a beach outing, here too there are tensions, as they fall in smaller dancing pairings—one threesome, two males and a female, moving in and out of their relationship by slipping above, under, and through each other’s embracements. In some senses, Naharin’s dance almost summarizes the balletic questions of this company: “can we live together despite our desires to live apart, our need to be ourselves without breaking the important link of the societal whole.” I think, given Cuba’s political concerns, this is a very crucial issue of the island’s life. How does anyone with his or her own personal demands and desires survive in a society that often insists that everyone must work together as a larger artistic and political unit?
The Malpaso Dance Company does not attempt to directly answer these conflicts, but the art they produce about these issues is so profound that you realize they may be now be one of the most important dance companies on the planet. The issues they raise are crucial for the survival of living on this earth where we must all work together, despite our profound differences, in order to live and make meaning.

Posted by greenintegerblog at 9:04 AM